The haplochromine cichlids are a tribe of cichlids in subfamily Pseudocrenilabrinae called Haplochromini. This group includes the type genus ( Haplochromis ) plus a number of closely related genera such as Aulonocara , Astatotilapia , and Chilotilapia . They are endemic to eastern, southern and northern Africa, except for Astatotilapia flaviijosephi in the Middle East . A common name in a scientific context is East African cichlids – while they are not restricted to that region, they are the dominant Cichlidae there. This tribe was extensively studied by Ethelwynn Trewavas, who made major reviews in 1935 and 1989, at the beginning and at the end of her career in ichthyology. Even today, numerous new species are being described each year.

In the African Great Lakes, there has been an amazing adaptive radiation of Haplochromini. Many have interesting behavior (e.g. mouthbrooding in Astatotilapia burtoni or the "sleeper" ambushes of Nimbochromis ), and brilliant colours are also widespread. Males and females are often strikingly sexually dichromatic. In the aquarium hobby, these fishes are popular, however due to their often aggressive behaviors and rather unusual water parameters, they are generally unsuitable for beginners or community tanks. There are some informal names used among aquarists for Haplochromini. Generally, any and all (as well as some similar-looking Pseudocrenilabrinae) may be referred to haplos, haps or happies. More specific terms are mbuna ("rock-dwelling browser") and utaka ("free-roaming hunter"), which are Bantu terms for these two ecological groups.

Haplochromines inhabit both rivers and lakes, but it is the lake species that have been most closely studied because of the species flocks known from some of the larger lakes, such as Lake Malawi. In the aquarium hobby, the "happies" are conveniently divided into four groups:  [2]

Lake Victoria's trophic web was thoroughly upset in the second half of the 20th century, after Nile Perch (Lates niloticus) were introduced to the lake. Among the haplochromines found there, there have been many extinctions, and a number of other species only survive in aquaria. One monotypic genus, Hoplotilapia , is believed to be entirely extinct at least in the wild. [3]

As numerous Haplochromini, in particular those species still placed in the "wastebin genus" Haplochromis , are of unclear relationships, the number and validity of genera in this tribe is subject to change. Hybrid introgression is seriously hampering molecular phylogenetic studies of this group. [4]

Two rather singular cichlids are also placed in the Haplochromini on occasion. These are the monotypic genera Etia and Myaka . But more usually, the former is considered incertae sedis among the Pseudocrenilabrinae, while the latter is placed in the Tilapiini.

Mbuna is the common name for a large group of African cichlids from Lake Malawi, and are members of the haplochromine family. The name mbuna means "rockfish" in the language of the Tonga people of Malawi. As the name implies, most mbuna are cichlids that live among the piles of rocks and along the rocky shores of Lake Malawi, as opposed to the utaka, cichlids that live in the open water or on sandy shores or soft substrates. Some species of mbuna are highly sexually dimorphic, although many are not. Among biologists, almost all of the cichlid species of Lake Malawi, including mbuna and non mbuna such as the utaka, are believed to have descended from one or a very few species that became isolated in the lake. With rising water levels, new habitats could be colonized and the many isolated rocky outcrops allowed new mbuna species to form. Their striking colors, intriguing behavioral characteristics, and relative hardiness make them very popular despite their unique demands for the home aquarist. 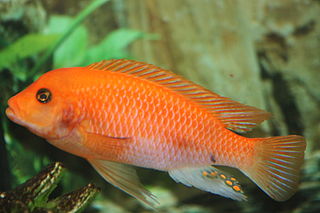 Maylandia estherae is a haplochromine cichlid. It is a rock dwelling fish or mbuna from Lake Malawi. This fish, like most cichlids from Lake Malawi, is a mouthbrooder - females hold their fertilized eggs then fry in their mouths until they are released after about 21 days.

Maylandia or Metriaclima is a genus of haplochromine cichlids endemic to Lake Malawi in East Africa. They belong to the mbuna (rock-dwelling) haplochromines. 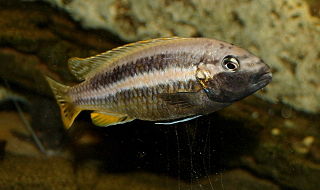 Melanochromis is a genus of haplochromine cichlids endemic to Lake Malawi in Eastern Africa. Ecologically, they belong to the rock-dwelling mbuna cichlids of Lake Malawi.

Sciaenochromis is a genus of haplochromine cichlids endemic to Lake Malawi in East Africa. The species are popular in the aquarium hobby, most notably S. fryeri.

Iodotropheus is a small genus of cichlids endemic to Lake Malawi in east Africa. The genus is distinguished from other genera of mbuna by the upper lip which is usually connected medially to the skin of the snout by a frenum; by its small, terminal mouth; by the outer teeth of both jaws, which are unequally bicuspid and loosely spaced, the tooth shafts inclined slightly toward the jaw symphysis; by the anterior teeth of the upper jaw being much longer and more robust than the lateral and posterior teeth. The rusty cichlid or lavender mbuna, Iodotropheus sprengerae is the most commonly encountered member of the genus in the aquarium trade.

Nimbochromis is a small genus of haplochromine cichlids mostly endemic to Lake Malawi in East Africa. They are known as sleeper cichlids or kaligono due to their unique hunting behaviour.

Iodotropheus sprengerae, the rusty cichlid, lavender mbuna or lavender cichlid, is a species of cichlid endemic to the Boadzulu and Chinyankwazi Islands and Chinyamwezi Island regions of Lake Malawi. It prefers a temperature range of 24-26 °C.

Nimbochromis livingstonii, Livingston's cichlid or (locally) kalingono, is a freshwater mouthbrooding cichlid native to Lake Malawi, an African Rift Lake. It is also found in the upper Shire River and Lake Malombe. They are found in inshore areas of the lake over sandy substrates.

Hemitaeniochromis urotaenia is a species of fish endemic to Lake Malawi in East Africa. It is the type species of the genus Hemitaeniochromis, and is part of family Cichlidae in subfamily Pseudocrenilabrinae and the tribe Haplochromini.

Aulonocara korneliae, known in the aquarium fish trade as the Aulonocara Chizumulu, Aulonocara blue gold or blue orchard Aulanocara, is a species of haplochromine cichlid.

The sulfurhead aulonocara or sulfurhead peacock is a species of haplochromine cichlid which is endemic to Lake Malawi in the country of Malawi and has only been observed on West Reef and Eccles Reef. It is threatened by collection for the aquarium trade and this has caused a 70% reduction in numbers. In this mouthbrooding species, the eggs are cared for by the females only, and it is found over mixed sand and rocky areas where they hunt small invertebrates in the sand. It closely resembles the blue orchid aulonocara though it develops a yellow blaze across its dorsal In the past these two taxa have been considered to be subspecies. The specific name honours Hans-Joachim Mayland, an author on cichlids and a fishkeeper, brought the species to the attention of Ethelwynn Trewavas.

The greenface aulonocara is a species of haplochromine cichlid which is endemic to Lake Malawi.

Dimidiochromis strigatus is a species of haplochromine cichlid endemic to Malawi. It was formerly placed in the genus Haplochromis and known as Haplochromis 'sunset' in the aquarium fish trade.

Protomelas kirkii is a species of cichlid endemic to Lake Malawi where it is most commonly found in areas vegetated with Vallisneria. This species can reach a length of 18 centimetres (7.1 in) TL. This species can also be found in the aquarium trade.

The Pseudocrenilabrinae are a subfamily in the cichlid family of fishes to which, according to a study from 2004, includes all the Middle Eastern and African cichlids with the exception of the unusual Heterochromis multidens and the Malagasy species. This subfamily includes more than 1,100 species. Previous authors recognized additional African subfamilies, e.g. the Tilapiinae of Hoedeman (1947), Tylochrominae of Poll (1986), or Boulengerochrominae of Tawil (2001).

Aulonocara koningsi is a species of haplochromine cichlid which is endemic to Lake Malawi. It is restricted to the waters around Mbenji Island and is therefore endemic to Malawi too. It is common in the restricted area in which it occurs but collection for the aquarium trade does not seem to have affected the population.