Thoracochromis is a fish genus of haplochromine cichlids that are endemic to Africa. Most species are from rivers in Angola and Namibia, or the Congo River Basin in Central Africa, but T. wingatii is from the Nile system. [1] Additionally, there are a few apparently undescribed species from the Nile system (two in its delta and one from lakes near Fayum), which appear to be close relatives of T. wingatii or Haplochromis loati . [2] Many species have been moved between this genus and Haplochromis , and while some consensus has been reached in recent years, their mutual delimitation is still far from settled.

There are currently 12 recognized species in this genus: [1]

T.buysi is endemic to the Kunene River. [3] 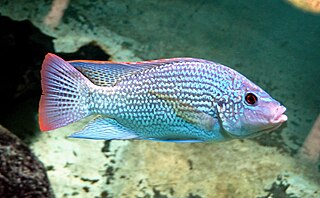 Oreochromis is a large genus of oreochromine cichlids, fishes endemic to Africa and the Middle East. A few species from this genus have been introduced far outside their native range and are important in aquaculture. Many others have very small ranges; some are seriously threatened, and O. ismailiaensis and O. lidole possibly are extinct. Although Oreochromis primarily are freshwater fish of rivers, lakes and similar habitats, several species can also thrive in brackish waters and some even survive in hypersaline conditions with a salinity that far surpasses that of seawater. In addition to overfishing and habitat loss, some of the more localized species are threatened by the introduction of other, more widespread Oreochromis species into their ranges. This is because they—in addition to competing for the local resources—often are able to hybridize.

Sarotherodon is a genus of oreochromine cichlids that are native to the northern half of Africa, with a single species, S. galilaeus, also ranging into the Levant. A couple of species from this genus have been introduced far outside their native range, and are important in aquaculture. Most other species have small ranges and some are seriously threatened. They mainly inhabit fresh and brackish water, but a few can live in salt water. Species in this genus, as well as those in several other oreochromine and tilapiine genera, share the common name "tilapia" and historically they were included in the genus Tilapia.

Xenotilapia is a genus of cichlids species endemic to Lake Tanganyika in east Africa.

Chromidotilapia is a genus of cichlid fishes. The genus contains 11 species. Of these, 9 are from Central Africa, one is found from Liberia to Cameroon, while the remaining species is restricted to Côte d'Ivoire. 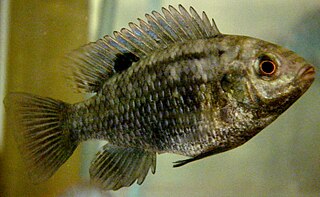 Tilapia is a genus of cichlid fishes endemic to freshwater habitats in Southern Africa. In the past this was a very large genus including all species with the common name tilapia, but today the vast majority are placed in other genera.

Mastacembelus is a genus of many species of spiny eel fish from the family Mastacembelidae. They are native to Africa and Asia. Most are found in rivers and associated systems, but there are also species in other freshwater habitats and a particularly rich radiation is found in the Lake Tanganyika basin with 15 species. A few species can even occur in brackish water.

Synodontis is the largest genus of mochokid catfishes. It is the biggest genus within the 10 genera and 190 different species in the family Mochokidae. Synodontis has over 131 different species within the genus. Synodontis are also known as squeakers, due to their ability to make stridulatory sounds through their pectoral fin spines when handled or disturbed. Synodontis make a sound that sounds like squeaking by rubbing their spines together. They do this when they have been frightened or when they become angry. Synodontis may also squeak when they are taken out of the water. These catfish are small- to medium-sized fish with many species exhibiting attractive spotted markings. Some species are also known for naturally swimming belly-up, earning the name upside-down catfish. Some of these species are Synodontis contractus and Synodontis nigriventris. While some of these species are known to swim upside down, another species, Synodontis multipunctatus, is a brood parasitic cuckoo catfish. 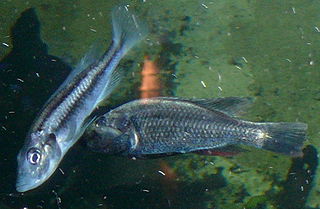 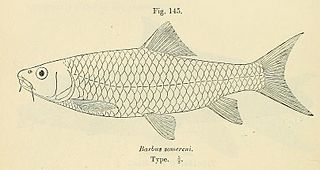 Labeobarbus somereni, or Someren's barb, is a species of ray-finned fish in the family Cyprinidae. It is found in Burundi, Rwanda, Tanzania, and Uganda. Its natural habitat is rivers. It is not considered a threatened species by the IUCN. Local names for the fish in Rwanda include ikinanga, inkwenwe, ifurwe (Satinsyi) and urwozi (Nyabarongo).

Brycinus is a genus of ray-finned fish in the family Alestiidae. Like other "African characids", they were formerly included in the Characidae but are actually somewhat more distantly related Characiformes.

Orthochromis is a genus of relatively small haplochromine cichlids native to rivers and lakes in Eastern and Middle Africa. Most of its species are rheophilic.

Schilbe is a genus of schilbid catfishes native to Africa. Some are colloquially called "butter catfishes", though this may also refer to the Asian genus Ompok of the family Siluridae.

Trematocara is a genus of cichlids endemic to Lake Tanganyika in Africa. They are relatively small, up to 15 cm (5.9 in) long, and slender in shape. These schooling, light-shy fish are typically found in relatively deep waters, but move closer to the surface at night to feed on plankton. They are mouthbrooders. 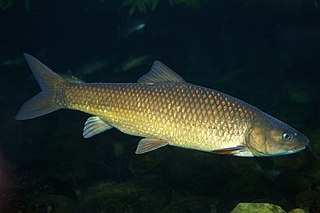 Labeobarbus is a mid-sized ray-finned fish genus in the family Cyprinidae. Its species are widely distributed throughout eastern Africa and especially southern Africa, but also in Lake Tana in Ethiopia. A common name, in particular for the southern species, is yellowfish. The scientific name refers to the fact that these large barbs remind of the fairly closely related "carps" in the genus Labeo in size and shape. As far as can be told, all Labeobarbus species are hexaploid.

Paramormyrops is a genus of elephantfish in the family Mormyridae from Africa.

Bryconaethiops is a genus of African tetras. 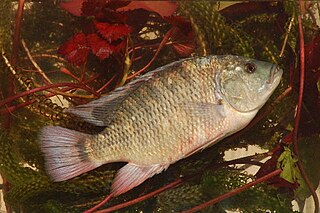 Coptodon is a genus of cichlids native to fresh, brackish and coastal marine waters in Africa with C. zillii also found in the Middle East. It is the only genus in the tribe Coptodonini. Formerly included in Tilapia, this genus and tribe was separated in 2013. Despite the change in genus, Coptodon are still referred to by the common name tilapia. Several species are important in local fisheries and a few are aquacultured.

Enteromius is a genus of small to medium-sized cyprinid fish native to tropical Africa. Most species were placed in the genus Barbus.