The following is a list of major rapids and other notable features on the Colorado River through Marble Canyon and Grand Canyon below Glen Canyon Dam, in order of their position downstream of Lee's Ferry. Ratings are given for how difficult the rapid is to navigate by whitewater raft or other water craft. The Grand Canyon section of the Colorado River, like several other big-water Western rivers, uses a scale of 1-10 for rapids, 10 being the most difficult. The International Scale of River Difficulty, which classifies rapids from class I to VI, is more common elsewhere in the US and internationally. 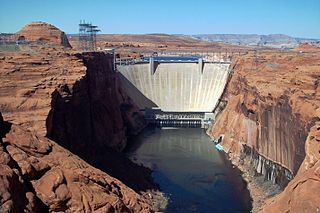 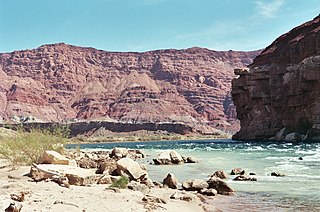 The Paria River is a tributary of the Colorado River, approximately 95 miles (153 km) long, in southern Utah and northern Arizona in the United States. It drains a rugged and arid region northwest of the Colorado, flowing through roadless slot canyons along part of its course. 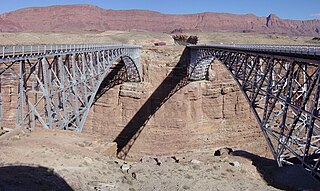 Navajo Bridge is a pair of steel spandrel arch bridges that cross the Colorado River near Lee's Ferry in northern Arizona. The newer bridge of the pair carries vehicular traffic on U.S. Route 89A (US 89A) over Marble Canyon between southern Utah and the Arizona Strip, allowing travel into a remote region north of the Colorado River including the North Rim of Grand Canyon National Park.

Georgie White Clark (1911–1992) was a river-running guide in the Grand Canyon. She was the first woman to run the Grand Canyon as a commercial enterprise, and she introduced several innovations and adjustments to the way that guides ran the Colorado. In particular, she used large army-surplus rafts, often lashing together multiple rafts, to maintain stability in the large rapids. In 2001, the United States Board on Geographic Names renamed Mile 24 Rapid in her honor. 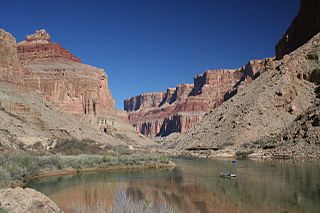 Rafting and white water rafting are recreational outdoor activities which use an inflatable raft to navigate a river or other body of water. This is often done on whitewater or different degrees of rough water. Dealing with risk and the need for teamwork is often a part of the experience.

Glen and Bessie Hyde were newlyweds who disappeared while attempting to run the rapids of the Colorado River through Grand Canyon, Arizona in 1928. Had the couple succeeded, Bessie Hyde would have been the first woman known to accomplish this feat. 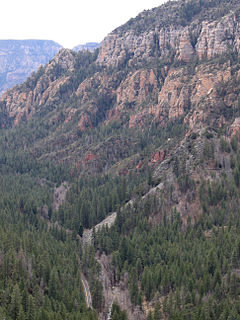 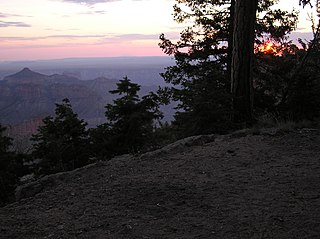 The Cape Final Trail is a hiking trail on the North Rim of the Grand Canyon National Park, located in the U.S. state of Arizona.

Lewis Ransome Freeman was an American explorer, journalist and war correspondent who wrote over twenty books chronicling his many travels, as well as numerous articles.

Haldane "Buzz" Holmstrom (1909–1946) was a pioneer of running the Colorado River through the Grand Canyon. He was the first person to float all the way from Green River, Wyoming to Boulder Dam solo. He built his own rowboats, often of his own design, to run whitewater rivers.

Norman D. Nevills was a pioneer of commercial river-running in the American Southwest, particularly the Colorado River through the Grand Canyon. He led trips including Dr. Elzada Clover and Lois Jotter, the first two women to successfully float the Grand Canyon, and Barry Goldwater.

Albert A. "Bert" Loper was a pioneer of the sport of whitewater river-running in the American Southwest, particularly the Colorado River and its tributaries. He along with many of the noted boatmen of his era, including Charles Russell, Julius Stone, Ellsworth Kolb, and others, were among the first people to navigate the Colorado River before the construction of Glen Canyon Dam and Navajo Dam.

Facing Your Danger is a 1946 American short film. The cameraman was amateur filmmaker Edwin E. Olsen. Using a Cine-Kodak and 16mm Kodachrome film, Olsen shot the film in 1942 on a Grand Canyon river trip conducted by Norman Nevills. Another amateur cameraman on the trip was Otis R. Marston. When Olsen ran out of film, Marston, who had brought 6,000 feet of Kodachrome magazines, provided Olsen with what he needed. Olsen edited the film and sold it to Warner Brothers in 1946. Lee Anthony and Gordon Hollingshead collaborated to re-edit and shorten the film to a one reel for theater release.

Diamond Creek is an intermittent stream that flows through the Hualapai tribal reservation generally north from Peach Springs, Arizona to the Colorado River. 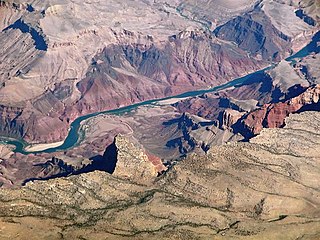 The Unkar Group is a sequence of strata of Proterozoic age that are subdivided into five geologic formations and exposed within the Grand Canyon, Arizona, Southwestern United States. It is about 1,600 to 2,200 m thick and composed, in ascending order, of the Bass Formation, Hakatai Shale, Shinumo Quartzite, Dox Formation, and Cardenas Basalt. It accumulated approximately between 1250 and 1104 Ma. In ascending order, the Unkar Group is overlain by the Nankoweap Formation, about 113 to 150 m thick; the Chuar Group, about 1,900 m (6,200 ft) thick; and the Sixtymile Formation, about 60 m (200 ft) thick. The Nankoweap and Sixtymile formations together with the Chuar and Unkar groups comprise the Grand Canyon Supergroup. 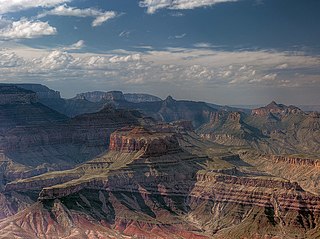 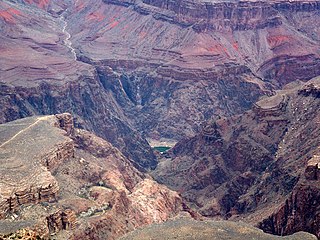 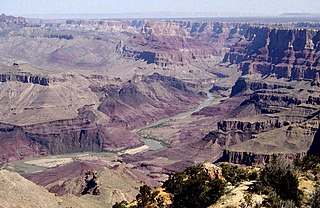 Located directly downstream of the Little Colorado River confluence with the Colorado River, the Tanner Graben, in the Grand Canyon, Arizona, USA is a prominence and cliffside rock formation below the East Rim. Tanner Graben is located riverside, on the Colorado River, on a north-northwest bank at Mile 68.5, and lies opposite Tanner Canyon. The Tanner Rapid, created by Tanner Creek lies at the riverside foot of the graben. The graben is a pronounced feature because of the black Cardenas Basalt that forms the middle section of the graben, presumably free of debris accumulation by its cliff face steepness, and winds, and airflow drainage that course through the Colorado River's canyons; unprotected side canyons of Cardenas Basalt show accumulations as a slope-forming geologic unit, with little showing of black basalt.

Robert Brewster Stanton was a United States civil and mining engineer. He was chief engineer of an expedition investigating the Grand Canyon for a possible railroad line in 1889-90, and investigated many mining properties.

The Bass Formation, also known as the Bass Limestone, is a Mesoproterozoic rock formation that outcrops in the eastern Grand Canyon, Coconino County, Arizona. The Bass Formation erodes as either cliffs or stair-stepped cliffs. In the case of the stair-stepped topography, resistant dolomite layers form risers and argillite layers form steep treads. In general, the Bass Formation and associated strata of the Unkar Group rocks dip northeast (10°-30°) toward normal faults that dip 60+° toward the southwest. This can be seen at the Palisades fault in the eastern part of the main Unkar Group outcrop area. In addition, thick, prominent, and dark-colored basaltic sills intrude across the Bass Formation.

Otis Reed "Dock" Marston was an American author, historian, and Grand Canyon river runner who participated in a large number of river-running firsts. Marston was the eighty-third person to successfully complete the water transit of the Grand Canyon. He spent the last thirty years of his life writing his magnum opus on the history of the first 100 Grand Canyon river runners. In researching his book, he amassed a vast collection of material on early river runners in the American Southwest, especially runners of the Green and Colorado Rivers. His collection is housed in the Huntington Library in San Marino, California. 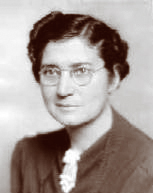