The first years with David Baker

The band's members met while students at the University at Buffalo. Buffalo media studies professor Tony Conrad was a strong artistic influence on co-founder Grasshopper. [6] The band was initially formed to score its members' student films. [7]

With their early records, Mercury Rev offered experimental, psychedelic rock, which gradually shifted to a melodic, ornate sound. Mercury Rev is often compared to The Flaming Lips, [8] and share close ties: soon after the band's formation, Donahue also joined the Flaming Lips as second guitarist and appeared on two of their albums; and since the 1990 album In a Priest Driven Ambulance , Dave Fridmann has co-produced every Flaming Lips studio album to date except 1993's Transmissions from the Satellite Heart .

Despite considerable critical acclaim, [9] [10] [11] their early releases never gave Mercury Rev more than cult popularity, [8] though they appeared on the smaller second stage at some 1993 Lollapalooza stops. Baker left after their second record, Boces (1993), citing musical and personal disputes; he later recorded an album as Shady. With his departure, the thematically darker and musically experimental features of the band began to disappear. [4]

The band's first post-Baker album, See You on the Other Side (1995) contained a variety of styles, including a sprawling psychedelic opening track and noise rock numbers like "Young Man's Stride" (for which a music video was released), but also more melodic songs, such as "Sudden Ray of Hope".

That year, the group also recorded and released the album, Paralyzed Mind Of The Archangel Void, under the moniker "Harmony Rockets". The album featured a single forty minute track of mostly instrumental psychedelic improvised music. It was rated four and half stars, out of five, by AllMusic. The group performed it again in the Don't Look Back concert series in 2009.

Beginning in the late 1990s, the band based itself in Kingston, New York where Donahue was born. [7]

The 1998 release of the acclaimed [12] [13] [14] [15] [16] Deserter's Songs (which featured appearances by Garth Hudson and Levon Helm of The Band) made Mercury Rev unexpected pop stars. In the UK, NME magazine made Deserter's Songs their Album of the Year. [17] Donahue's earnest, high-pitched vocals and concentration on relatively concise, melodic songs gave the band's material an entirely new feel and much increased popularity (Deserter's Songs spawned three UK Top 40 singles: "Delta Sun Bottleneck Stomp", "Opus 40" and "Goddess On A Hiway").

All Is Dream was issued in 2001 and became the band's highest charting album in the UK to date (#11). It included "Little Rhymes", "Nite And Fog" and "The Dark is Rising," which reached No. 16 in the UK Singles Chart. [18] David Bowie producer Tony Visconti arranged strings for the album.

Mercury Rev's The Secret Migration was released on January 24, 2005. It featured the UK Top 40 single "In A Funny Way" (#28). The album itself reached #16 in the UK Albums chart. It was followed up in 2006, by a compilation album, The Essential Mercury Rev: Stillness Breathes 1991-2006 and the film soundtrack album Hello Blackbird.

The band released a pair of albums on September 29, 2008: Snowflake Midnight , and a free MP3 album of instrumentals, Strange Attractor .

The Light in You was released on October 2, 2015 through Bella Union, their first studio album in seven years. It reached #39 on the UK albums chart. [19] Mercury Rev's most recent album, a reworking of Bobbie Gentry's seminal album The Delta Sweete , was released in February 2019. [20] The album features instrumentation by Mercury Rev and a female guest singer unique to each song. Lucinda Williams, actress Carice van Houten, Beth Orton and Norah Jones were among the vocalists. The album was another UK Top 40 hit in the UK for the band (#32).

"Holes" was covered by The National's lead singer Matt Berninger in 2020. 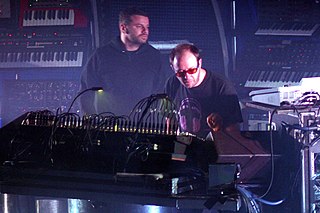 The Chemical Brothers are an English electronic music duo formed by Tom Rowlands and Ed Simons in Manchester in 1989. They were pioneers in bringing the big beat genre to the forefront of pop culture. They released their debut album Exit Planet Dust (1995) and it eventually went on to sell over a million copies worldwide. After attracting Virgin Records, the duo achieved more widespread success with their second album Dig Your Own Hole (1997), which topped the UK charts. In the UK, they have had six No. 1 albums and 13 Top 20 singles, including two No. 1 hits. 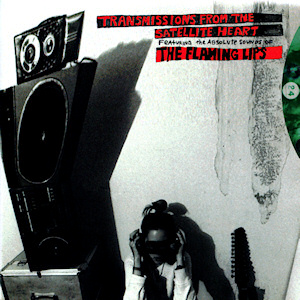 Transmissions from the Satellite Heart is the sixth studio album by American rock band the Flaming Lips, released in 1993 by Warner Bros. Records. The album marked the departure of Jonathan Donahue and Nathan Roberts, and the addition of guitarist Ronald Jones and drummer Steven Drozd.

Elbow are an English rock band formed in Bury, Greater Manchester, in 1997. The band consists of Guy Garvey, Craig Potter, Mark Potter and Pete Turner. They have played together since 1990, adopting the name Elbow in 1997. Drummer Alex Reeves replaced Richard Jupp in 2016. 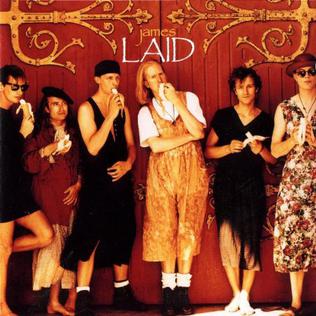 Laid is the fifth studio album by British rock band James. It was released on 27 September 1993 through Fontana Records. The album's sound, which is "stripped-down" as compared to their prior releases, was inspired by their recent experience touring as supporting act to Neil Young. Enlisting Brian Eno as producer, James recorded for six weeks at The Windings in Wrexham, Wales, and Real World Studios in Box, Wiltshire. The sessions also resulted in the experimental sixth studio album Wah Wah (1994).

Hit to Death in the Future Head is the fifth studio album by American rock band The Flaming Lips, released on August 11, 1992, by Warner Bros. Records. "Talkin' 'Bout the Smiling Deathporn Immortality Blues " was released as the lead track on the EP Yeah, I Know It's a Drag... But Wastin' Pigs Is Still Radical to promote the album. The title provided the inspiration for the name of the British band The Futureheads. 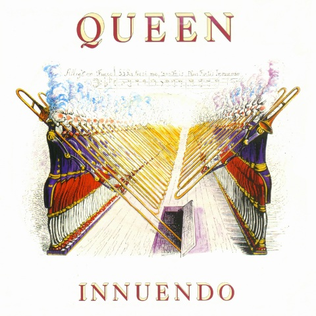 "Innuendo" is a song by the British rock band Queen. Written by Freddie Mercury and Roger Taylor but credited to Queen, it is the opening track on the album of the same name, and was released as the first single from the album. The single debuted at number one on the UK Singles Chart in January 1991, the band's first number-one hit since "Under Pressure" in 1981, and additionally reached the top ten in ten other countries. It is included on the band's second compilation album Greatest Hits II.

Deserter's Songs is the fourth studio album by rock band Mercury Rev, released in late September 1998. British music magazine NME named Deserter's Songs album of the year for 1998. Limited edition copies of the album came in a brown cardboard envelope-like package, with a stamp on the cover postmarked with the release date, as well as two art postcards.

Yerself Is Steam is the 1991 debut album by Mercury Rev. The title is a malapropism of the phrase "Your self-esteem," and is taken from a recurring lyric in the opening "Chasing a Bee." "Car Wash Hair" was released as a single to follow the album. "Very Sleepy Rivers" is supposedly about a serial killer, with the river acting as a metaphor for the killer's relative calm and sudden tendency to snap. 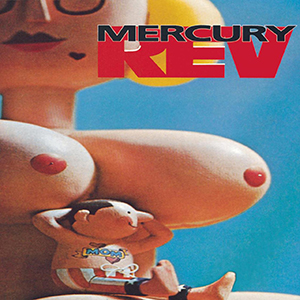 Boces is the second album by Mercury Rev, released in 1993. 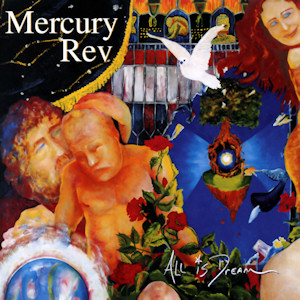 All Is Dream is the fifth studio album by American rock band Mercury Rev. It was released in the United Kingdom on August 27, 2001, in France on August 28, 2001, and in the United States on September 11, 2001. The album's front cover features half of the 1991 painting Breakthrough Dreaming by artist and mystic Jennifer Hathaway.

Grasshopper is an American musician with the band Mercury Rev. He has also appeared with Rev side-project Harmony Rockets, his own band Grasshopper and the Golden Crickets, and as a guest musician on numerous other recordings.

David Baker is an American musician best known as a founding member and the former lead singer of the indie rock band Mercury Rev, formed in Buffalo, New York in the late 1980s, and after as vocalist for Variety Lights.

"Goddess on a Hiway" is the first single from Mercury Rev's fourth studio album, Deserter's Songs. The single was first released on November 2, 1998, and then re-issued on August 16, 1999. Two music videos were produced for the song, one directed by Anton Corbijn, the other directed by James & Alex. B-sides include a cover of "I Only Have Eyes for You" featuring musician Sean O'Hagan. 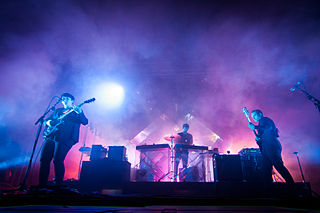 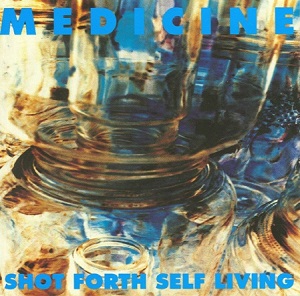 Shot Forth Self Living is the debut studio album by American rock band Medicine, released on September 15, 1992 on Def American. 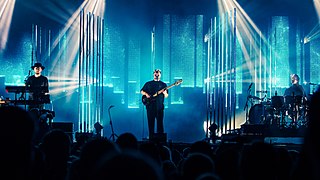 Jeff Mercel is an American multi-instrumentalist, composer, and studio musician, best known for his time in the indie rock band, Mercury Rev.

Jungle is a British electronic music project founded in 2013 by producers Josh Lloyd-Watson and Tom McFarland. 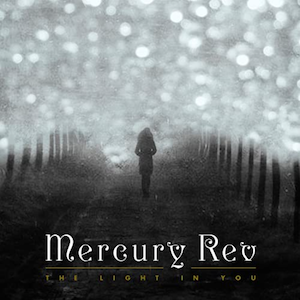 Wikimedia Commons has media related to Mercury Rev .
This page is based on this Wikipedia article
Text is available under the CC BY-SA 4.0 license; additional terms may apply.
Images, videos and audio are available under their respective licenses.