The team is for players of 17 years or under at the start of a UEFA European Under-17 Championship campaign. [1] Norway have qualified for the 2022 World Cup in Qatar

The following players were called up for the friendlies against Sweden, Austria and Ireland. [2] National team caps and goals are correct as of 12 September 2019.

Arna-Bjørnar Fotball is a Norwegian football club from Arna, Bergen.

Vegar Eggen Hedenstad is a Norwegian professional footballer who plays as a defender for Turkish club Fatih Karagümrük. Hedenstad has been capped at international level for Norway 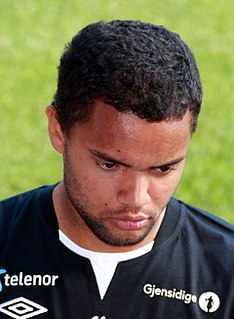 Maria Thorisdottir is a Norwegian footballer who plays as a defender for Manchester United of the English FA WSL and the Norway national team. Prior to fully focusing on football, she also played handball in the Eliteserien for Sola and Stabæk.

Lisa-Marie Karlseng Utland is a Norwegian footballer who plays for Rosenborg Kvinner in the Norwegian Toppserien and for the Norway national team.

Anja Sønstevold is a Norwegian footballer who plays for FC Fleury 91 in the French Division 1 Féminine and for Norway.

Arendal Fotball is a Norwegian professional football club based in Arendal. The club competes in the 2. divisjon, which is the third-tier of Football in Norway.