Nova Life is a Greek satellite television channel owned by Nova, who own and operate a DTH satellite service with the same name. It was launched on May 13, 2013, and it features series, movies, talk shows, shows with showbiz news, making of, deleted scenes and backstage. Also, it broadcasts hit series from its sister channel Nova Cinema.

In Cyprus it is available to the subscribers of Nova Cyprus and CytaVision.

Reality television is a genre of television programming that documents purportedly unscripted real-life situations, often starring unknown individuals rather than professional actors. Reality television first emerged as a distinct genre in the early 1990s with shows such as The Real World, then achieved prominence in the early 2000s with the success of the series Survivor, Idols, and Big Brother, all of which became global franchises. Reality television shows tend to be interspersed with "confessionals", short interview segments in which cast members reflect on or provide context for the events being depicted on-screen; this is most commonly seen in American reality television. Competition-based reality shows typically feature gradual elimination of participants, either by a panel of judges, by the viewership of the show, or by the contestants themselves. 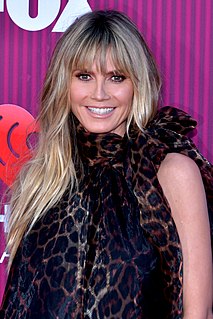 Heidi Klum is a German-American model, television host, producer, and businesswoman. She appeared on the cover of the Sports Illustrated Swimsuit Issue in 1998 and was the first German model to become a Victoria's Secret Angel. 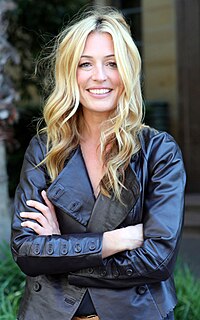 bTV is the first private nation-wide television channel in Bulgaria. It is operated by bTV Media Group, as part of Central European Media Enterprises, and is reportedly the Bulgarian television channel with the largest viewing audience. It was previously owned by Balkan News Corporation, part of News Corporation. On February 18, 2010, News Corp announced that it had agreed to sell 94% of bTV to Central European Media Enterprises, after many months of negotiations. The US$400M deal was completed in the second quarter of 2010. bTV has a 37% market share in Bulgaria.

Hannah Simone is a British-Canadian actress, television host, and former VJ and fashion model. She is known for portraying Cece on the Fox sitcom New Girl.

Jeannie Mai Jenkins is an American television presenter, make-up artist, and stylist. She is best known for her work on the makeover show How Do I Look? and the syndicated daytime talk show The Real. As a fashion expert, she is frequently featured on television programs such as Today, Extra TV, Entertainment Tonight, and Insider. She has also appeared as a host for E! as well as the Miss Universe pageant. She is currently a sideline reporter on Holey Moley on ABC.

Zhejiang Television is sometimes referred to as 2 TV, is a television channel under Zhejiang Radio and Television Group serving the Hangzhou city and Zhejiang province area. Zhejiang TV, Zhejiang radio and Television Group satellite channel, Taiwan and Taiwan nickname blueberry blue whale, is Zhejiang radio and television group integrated satellite television channel, launched on October 1, 1960, January 1, 1994 for the national broadcast. In 2006, Zhejiang satellite TV launched its own entertainment program "too cola". on August 25, 2008, and the revised version of the "China blue" slogan. September 28, 2009, the realization of high, standard clear broadcast. In 2012, the establishment of the "first dream channel" slogan, and the introduction of inspirational music commentary program "The voice of China". In 2014, the introduction of the reality show "running brothers". 2015, access to the "TV landmark" annual most influential provincial TV title.

Colors Infinity is an Indian pay television channel owned by Viacom18. It primarily airs popular shows from the United States and the United Kingdom along with a few original shows to appeal to the English-speaking population of India and a few other South Asian countries. The channel was co-curated by Karan Johar and Alia Bhatt.

Benjamin Hart is an English magician. In 2007, he was awarded the "Young Magician of the Year" award by The Magic Circle. Hart has worked on British television and is an inventor and designer of magic tricks and stage illusions. In 2014, he starred in Killer Magic on BBC Three. Hart was a finalist on Britain's Got Talent in 2019.