MAD TV (also known as MAD) is a Greek television network that broadcasts music related programming including video clips, music news, and interviews as well as concert footage. It was the first music station in Greece, launched on June 6, 1996, and is run by Andreas Kouris.

In May 2000, MAD TV launched the first Greek music portal, which provides its users with the most up to date worldwide music information along with brand new Internet services.

Since June 26, 2004, MAD TV successfully organizes each year the MAD Video Music Awards, a unique Greek music production and awards ceremony, which allows the public to vote for their favorite artists and video clip. On May 26 and 27 of 2005, MAD TV held the 1st conference for the music industry in Greece, Athens Music Forum, which focuses on bringing together representatives from all professional fields that are directly and indirectly related to the music industry. MAD also organizes Secret Concerts, a series of famous artist’s live appearances in front of a small audience in a private and secret place, which gives the opportunity to artists to present a special performance with a different repertoire.

The period 2013-2015, MAD produced the Greek selection to the Eurovision Song Contest, the Eurosong – A MAD Show.

In December 2005, MAD established, in cooperation with UBI World TV, the first international Greek music channel MAD World which targets Greeks abroad. MAD World, is on air 24 hours a day, broadcasting all genres of the Greek Music with special daily shows, rockumentaries dedicated to famous Greek artists and special shows that keep the audience informed about the events that take place in Greece. In July 2006, MAD partnered up with ANT1 to launch Blue, a channel similar to MAD World but available only to audiences in North America. The channel was available with select international packages from satellite providers Dish Network in North America. However, Blue was not available from any North American cable television providers.

MadWalk is a project by MAD TV that Famous and newcomers Greek fashion designers coexist with the greatest Greek performers in a unique event that combines dynamic Live Performances with subversive Fashion Shows.

Mistresses of the first Fashion Music Project, in 2011, was the fashion icons Vicky Kaya and Tamta. For the second year, Mad TV decided that the MAD presenter Mairi Synatsaki would be ideal for the Fashion Music Project, so Vicky Kaya and herself presented the event together for the two following years (2012-2013). In 2014, Mairi Synatsaki was the hostess for the show by herself.

Simulcast is the broadcasting of programs or events across more than one resolution, bitrate or medium, or more than one service on the same medium, at exactly the same time. For example, Absolute Radio is simulcast on both AM and on satellite radio. Likewise, the BBC's Prom concerts were formerly simulcast on both BBC Radio 3 and BBC Television. Another application is the transmission of the original-language soundtrack of movies or TV series over local or Internet radio, with the television broadcast having been dubbed into a local language.

Music Choice  is a multi-product music service that provides audio and video music programming to millions of consumers nationwide through their cable, satellite and other multi-channel video programming distributors in the United States via televisions, online and mobile devices.

Zoom is an Indian glamour and entertainment television channel primarily covering Bollywood and based in Mumbai. The channel was launched in September 2004 and caters primarily to urban audiences. It started out as a music/Bollywood/serial channel, but quickly pulled serials off the air, becoming a music and Bollywood news channel within months. It is a part of The Times Group, one of India's largest media conglomerates. An internet pioneer, it has been available on mobile internet since March 2009. Zoom is available across 60 countries worldwide along with a digital presence.

Vasiliki "Vicky" Kaya is a Greek fashion model, television presenter, entrepreneur and actress. She has appeared on the covers of numerous international fashion magazines such as Vogue, Esquire, Madame Figaro, Marie Claire, and Elle.

Vodafone Greece is the Greek subsidiary of Vodafone. Its headquarters are in Halandri - one of the northern suburbs of Athens. 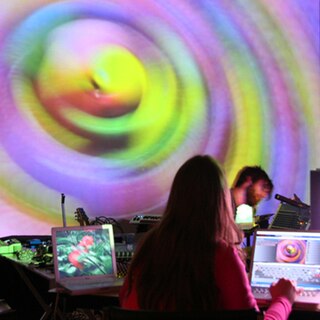 VJing is a broad designation for realtime visual performance. Characteristics of VJing are the creation or manipulation of imagery in realtime through technological mediation and for an audience, in synchronization to music. VJing often takes place at events such as concerts, nightclubs, music festivals and sometimes in combination with other performative arts. This results in a live multimedia performance that can include music, actors and dancers. The term VJing became popular in its association with MTV's Video Jockey but its origins date back to the New York club scene of the 70s. In both situations VJing is the manipulation or selection of visuals, the same way DJing is a selection and manipulation of audio. 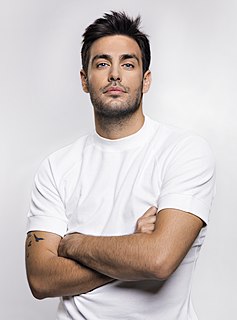 Kostas Martakis is a Greek singer, model, television host and actor, who rose to fame after appearing on Greek talent show Dream Show aired by Alpha TV in 2006. Following his participation, he released five studio albums and also participated in the Greek national final for the Eurovision Song Contest 2008 and 2014. In 2011, he participated in the second season of Greece's Dancing with the Stars, placing second and three years later he was in the backstage host featuring Doukissa Nomikou. In 2013, he took part in the first season of Your Face Sounds Familiar.

Internet talk radio is an audio broadcasting service transmitted via the Internet. Broadcasting radio shows on the internet is usually preferred to webcasting since it is not transmitted broadly through wireless means. It mainly works by Internet radio transmissions.

Greece's Next Top Model, or Next Top Model, is a Greek reality television series that forms part of the Top Model series. Greek model Vicky Kaya assumed the role of Tyra Banks from the original series as the head of the search as well as a mentor for the contestants for the first two seasons and from season three all four judges are the head of the search for the contestants. The basic premise of the series is a group of young contestants who live together in a house for several weeks while taking part in various challenges, photo shoots and meetings with members of the modeling industry. Normally, one poor-performing contestant is eliminated each week until the last contestant remaining is declared "Greece's Next Top Model" and receives a modeling contract along with other associated prizes.

NyooTV is a video on demand platform built using adaptive streaming and customized mobile applications which is claimed to work even with low bandwidths. It aggregates and offers Indian entertainment content across new media platforms and digital entertainment devices currently to Indian audiences in US and India. Registered users can get news about movies by following NyooTV through social networking sites. NyooTV provides global video content like TV shows, Bollywood films, Bollywood news, New Bollywood songs, events and sports events of interest to Indian consumers.

"Baby It's Over" is a song by the Greek Pop singer Helena Paparizou. It was released as the lead single from her first compilation album Greatest Hits & More, written by Tamminen, Ahlstedt & Sörvaag and produced by DonK. The song first premiered on February 2, 2011 on the MadWalk fashion Event and released as digital download on February 18, 2011.

Cube TV was established on July 1, 2015, is a channel launched by iHQ's media division and Cube Entertainment, and is in charge of channel operation in iHQ Media Division and contents production and supply at Cube Entertainment. Through the combination of broadcasters and entertainment companies, Cube TV aims to globalize the channels in line with the current of the Korean Wave, which is expanding its market both domestically and globally by producing stable and consistently excellent contents in promoting K-pop culture through variety shows, fansign meetings and online drama.