The Obotrites (Latin : Obotriti, Abodritorum, Abodritos…) or Obodrites, also spelled Abodrites (German : Abodriten), were a confederation of medieval West Slavic tribes within the territory of modern Mecklenburg and Holstein in northern Germany (see Polabian Slavs). [1] For decades, they were allies of Charlemagne in his wars against the Germanic Saxons and the Slavic Veleti. The Obotrites under Prince Thrasco defeated the Saxons in the Battle of Bornhöved (798). The still heathen Saxons were dispersed by the emperor, and the part of their former land in Holstein north of Elbe was awarded to the Obotrites in 804, as a reward for their victory. This however was soon reverted through an invasion of the Danes. The Obotrite regnal style was abolished in 1167, when Pribislav was restored to power by Duke Henry the Lion, as Prince of Mecklenburg, thereby founding the German House of Mecklenburg.

The Bavarian Geographer, an anonymous medieval document compiled in Regensburg in 830, contains a list of the tribes in Central Eastern Europe to the east of the Elbe. The list includes the Nortabtrezi (Obotrites) - with 53 civitates. Adam of Bremen referred to them as the Reregi because of their lucrative trade emporium Reric. In common with other Slavic groups, they were often described by Germanic sources as Wends.

The main tribes of the Obotritic confederation were: [2]

Other tribes associated with the confederation include: [2]

As allies of the Carolingian kings and the empire of their Ottonian successors, the Obotrites fought from 808 to 1200 against the kings of Denmark, who wished to rule the Baltic region independently of the empire. When opportunities arose, for instance upon the death of an emperor, they would seek to seize power; and in 983 Hamburg was destroyed by the Obotrites under their king, Mstivoj. At times they levied tribute from the Danes and Saxons. Under the leadership of Niklot, they resisted a Christian assault during the Wendish Crusade.

German missionaries such as Vicelinus converted the Obotrites to Christianity. In 1170 they acknowledged the suzerainty of the Holy Roman Empire, leading to Germanisation and assimilation over the following centuries. However, up to the late 15th century most villagers in the Obotritic area were still speaking Slavic dialects (Polabian language), although subsequently their language was displaced by German. The Polabian language survived until the beginning of the 19th century in Hanoverian Wendland, eastern Lower Saxony (bordering modern Mecklenburg-Western Pomerania). [3] The ruling clan of the Obotrites kept its power throughout the Germanisation and ruled their country (except during a short interruption in Thirty Years' War) as House of Mecklenburg until the end of monarchies in Germany in November Revolution 1918.

The rulers of Obotrite lands were later the dukes and grand dukes of Mecklenburg. 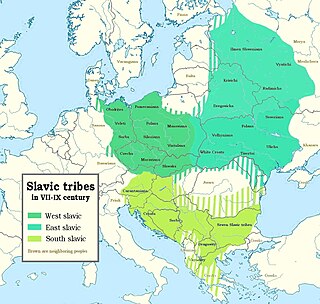 Wends is a historical name for Slavs living near Germanic settlement areas. It refers not to a homogeneous people, but to various peoples, tribes or groups depending on where and when it was used. In the modern day, communities identifying as Wendish exist in Lusatia, Texas, and Australia.

Lüchow-Dannenberg is a district in Lower Saxony, Germany, which is usually referred to as Hanoverian Wendland or Wendland. It is bounded by the districts of Uelzen and Lüneburg and the states of Mecklenburg-Western Pomerania, Brandenburg and Saxony-Anhalt. 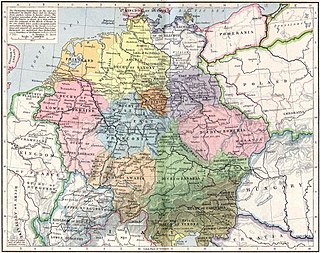 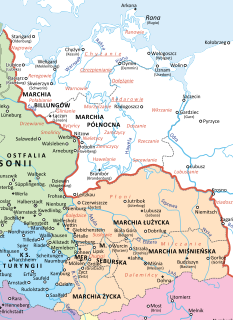 The Veleti, also known as Wilzi, Wielzians, and Wiltzes, were a group of medieval Lechitic tribes within the territory of Hither Pomerania, related to Polabian Slavs. They had formed together the Confederacy of the Veleti, a loose monarchic confederation of the tribes. Said state existed between the 6th and 10th centuries, after which, it was succeeded by the Lutician Federation.

Wolkwitz is a family name, or surname, of German/Western-Slavic origins.

The Limes Saxoniae, also known as the Limes Saxonicus or Sachsenwall, was an unfortified limes or border between the Saxons and the Slavic Obotrites, established about 810 in present-day Schleswig-Holstein.

The Billung March or March of the Billungs was a frontier region of the far northeastern Duchy of Saxony in the 10th century. It was named after the family which held it, the House of Billung.

The Wagri, Wagiri, or Wagrians were a tribe of Polabian Slavs inhabiting Wagria, or eastern Holstein in northern Germany, from the ninth to twelfth centuries. They were a constituent tribe of the Obodrite confederacy. 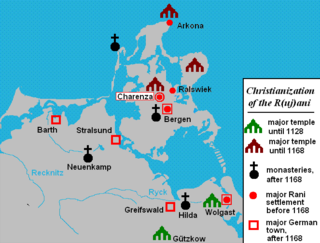 The Rani or Rujani were a West Slavic tribe based on the island of Rugia (Rügen) and the southwestern mainland across the Strelasund in what is today northeastern Germany.

Liubice, also known by the German name Alt-Lübeck, was a medieval West Slavic settlement near the site of modern Lübeck, Germany. Liubice was located at the confluence of the Schwartau with the Trave across from Teerhof Island, approximately four kilometres north of Lübeck's island old town. The residence of Henry, the Christian prince of the Obotrites, Liubice was destroyed after his death by the pagan Rani of Rugia.

The Drevani were a tribe of Polabian Slavs settling on the Elbe river in the area of the present-day Lüchow-Dannenberg district of Lower Saxony, Germany.

Pomerania during the Early Middle Ages covers the History of Pomerania from the 7th to the 11th centuries.

The Kessinians, also known as Kessini, Chizzini, Kcynianie and Chyżanie, were a medieval West Slavic tribe in what is now northeastern Germany. They inhabited the territory between the Warnow and Recknitz rivers, today split between the districts of Rostock and Vorpommern-Rügen in Mecklenburg-Vorpommern. Their capital and name-giving stronghold was a gard near modern Kessin east of Rostock. Linguistically, they belonged to the Polabian Slavs.

The Wendland is a region in Germany on the borders of the present states of Brandenburg, Mecklenburg-Western Pomerania, Lower Saxony and Saxony-Anhalt. Its heart is the Hanoverian Wendland in the county of Lüchow-Dannenberg in Lower Saxony.

The Smeldingi were a small group of Polabian Slavs living on the border of the Old Saxony in the 9th century, probably between the Elbe and the Havel. They were a sub-group of the Hevelli. Their name is etymologically related that of the South Slavic Smolyani and the East Slavic city of Smolensk.

The Linones were a small Slavic people first recorded in the early 9th century. They lived north and east of the Elbe, across from Höhbeck in the region around Lenzen, south of the Wilzi and Obotrites, north of the Hevelli and northeast of the Saxons. They may have been a sub-group of the Wilzi and were often under Obotrite control. They may be associated with the medieval Gau Liezizi.