Osbeckia is a genus of plants in the family Melastomataceae. It was named by Carl Linnaeus for the Swedish explorer and naturalist Pehr Osbeck (1723–1805).

Osbeckias are native to Eastern Asia — China, Japan, Malaysia, India, Sri Lanka and Australasia. Some species have been investigated as herbal remedies. [1] [2] http://pharmascholars.com/PSL/Issue/770/?title=Anthocyanin%20diversity%20in%20osbeckia%20l.%20Species%20from%20munnar%20hills

The following 11 species are accepted botanical names according to The Plant List.

Following botanical names are used in the texts, but categorized as Unresolved by The Plant List. 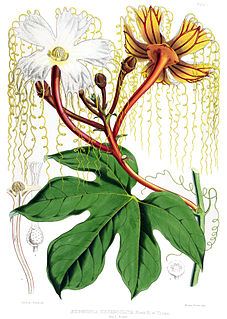 The Cucurbitaceae, also called cucurbits or the gourd family, are a plant family consisting of about 965 species in around 95 genera, of which the most important to humans are:

Bauhinia is a large genus of flowering plants in the subfamily Cercidoideae and tribe Bauhinieae, in the large flowering plant family Fabaceae, with a pantropical distribution. The genus was named after the Bauhin brothers Gaspard and Johann, Swiss-French botanists. 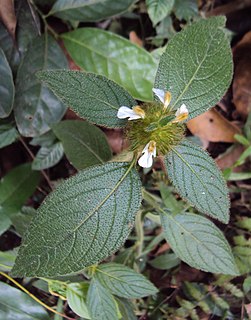 Leucas is a genus of plants in the family Lamiaceae, first described by Robert Brown in 1810. It contains over 200 species, widespread over much of Africa, and southern and eastern Asia with a few species in Queensland and on various islands in the Indian Ocean.

Indigofera is a large genus of over 750 species of flowering plants belonging to the pea family Fabaceae. They are widely distributed throughout the tropical and subtropical regions of the world.

Gymnosporia is an Old World genus of plants, that comprise suffrutices, shrubs and trees. It was formerly considered congeneric with Maytenus, but more recent investigations separated it based on the presence of achyblasts and spines, alternate leaves or fascicles of leaves, an inflorescence that forms a dichasium, mostly unisexual flowers, and fruit forming a dehiscent capsule, with an aril on the seed. 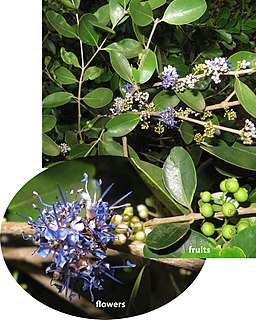 Memecylon is a plant group in Melastomataceae. It consists of 350-400 species of small to medium-sized trees and shrubs occurring in the Old World tropics. Memecylon is a monophyletic group basal to the Melastomataceae clade. Memecylon taxa have more than 600 published basionyms. Diversity of this group is concentrated in tropical Africa, Madagascar, Sri Lanka, India and Malaysia.

Pavetta is a genus of flowering plants in the family Rubiaceae. It comprises about 350 species of trees, evergreen shrubs and sub-shrubs. It is found in woodlands, grasslands and thickets in sub-tropical and tropical Africa and Asia. The plants are cultivated for their simple but variable leaves, usually opposite but also occur in triple whorls. The leaves are often membranous with dark bacterial nodules. Pavetta has small, white, tubular flowers, sometimes salviform or funnel-shaped with 4 spreading petal lobes. The flowers are carried on terminal corymbs or cymes.

Lumnitzera is an Indo-West Pacific mangrove genus in the family Combretaceae. An English common name is black mangrove. Lumnitzera, named after the German botanist, Stephan Lumnitzer (1750-1806), occurs in mangroves from East Africa to the Western Pacific, and northern Australia. 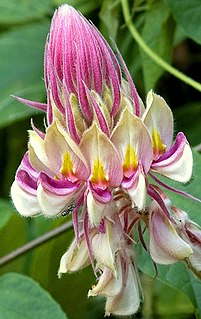 The tribe Millettieae is one of the subdivisions of the plant family Fabaceae. 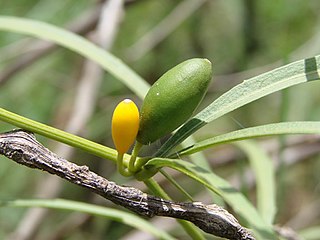 Cayaponia is the largest genus in the gourd family, Cucurbitaceae, with about 60 species. The plants are referred to as melonleaf. They are common from the southern United States to South America. Some species are also found in western Africa, Madagascar, and Fernando de Noronha, which is about 354 km off the coast of Brazil. It is native the southern United States to central South America and the Caribbean islands. Most species are found in rainforests and have white or yellow-green flowers. The original Cayaponia were pollinated by bats, but at least two shifts to bee pollination have occurred among some of its species. This is apparently the first clade to shift from bat to bee pollination vice bee to bat pollination. A 2011 study based on genetics placed the genus Selysia under this genus.

Sonerila is a genus of plants in the family Melastomataceae. This genus is characterized by presence of three petals as opposed to five in the other members of the family. Most members of the genus prefer growing in shady habitats. It is a large genus including about 175 species.