Most railway stations in Italy are maintained and operated by RFI, a subsidiary of Ferrovie dello Stato Group. A minor part of them are operated by private and regional companies, conceded by the state. [1] [2]

Lists of railway stations in Italy by region. [3]

Major stations with over 6,000 passengers per day. As major interchanges they will have many departures and arrivals daily, and will be served by high-speed/long-distance services. They are the principal stations for the Italian cities they serve. They have the highest commercial potential (both fares and revenue from on-site merchants). [5]

Gold stations have high traffic levels. These include major urban inter-changes and stations serving large towns. They have a lower commercial potential.

This class includes all other small to medium-sized stations served by metropolitan and regional services. Some of these may be served by long-distance services.

Grandi Stazioni is the commercial operator of 13 platinum-level railway stations. Centostazioni operates another 103 stations, including Milano Porta Garibaldi, Padova and Pisa Centrale. Both companies are owned by Ferrovie dello Stato.

Roma Tiburtina is the second largest railway station in Rome, after Roma Termini. Located in the north-eastern part of the city, it was originally constructed during the 1860s as a terminal station. In recent years, the station has been redeveloped to better serve as a hub for the Italian high-speed rail services. The station is connected to Rome's Metro line B at Tiburtina metro station, as well as to local bus services via an adjacent bus depot while private vehicle users are provided with more than 100,000 spaces across multiple on-site car parks.

Torino Porta Susa is a railway station in Turin, northern Italy; it is the second busiest mainline station in the city, after Torino Porta Nuova. It is located in Corso Inghilterra. 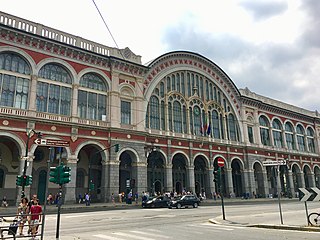 Torino Porta Nuova railway station is the main railway station of Turin, northern Italy. It is the third busiest station in Italy for passenger flow after Rome Termini and Milan Central, with about 192,000 journeys per day and 70 million travellers a year and a total of about 350 trains per day. Porta Nuova is a terminal station, with trains arriving perpendicularly to the facade. The station is located in Corso Vittorio Emanuele II, right in front of Piazza Carlo Felice. 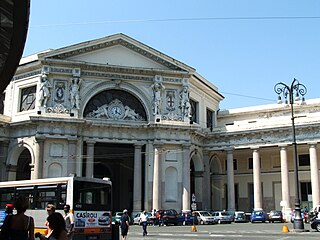 Genova Piazza Principe railway station is the central station of Genoa and is located on Piazza Acquaverde, occupying the entire north side of Via Andrea Doria—where the station entrance is located—in the town centre and a short distance from the Palazzo del Principe, from which it takes its name. It is used by about 66,000 passengers per day and 24,000,000 per year. The first temporary station was opened in 1854 at the end of the line from Turin. Lines were later opened to Milan, Rome and the French border at Ventimiglia.

Grandi Stazioni S.p.A. is a member company of Italy's Ferrovie dello Stato group. It was created to rehabilitate and manage, even commercially, the 13 biggest Italian railway stations.

Chiavari railway station serves the town and comune of Chiavari, in the Liguria region, northwestern Italy. Opened in 1868, it forms part of the Pisa–La Spezia–Genoa railway, and is situated between La Spezia and Genoa. 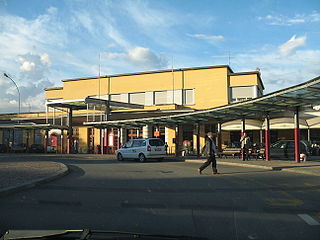 Biella San Paolo railway station is the main station serving the town and comune of Biella, in the Piedmont region, northwestern Italy. It is the junction of the Biella–Novara and Santhià–Biella railways.

Grosseto railway station is the main station serving the city and comune of Grosseto, in the region of Tuscany, central Italy. Opened in 1864, it forms part of the Pisa–Livorno–Rome railway. 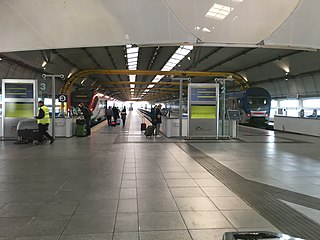 Campobasso railway station serves the city and comune of Campobasso, in the region of Molise, southern Italy. Opened in 1883, it is located on the Termoli–Venafro railway.

Lodi railway station serves the city and comune of Lodi, in the region of Lombardy, northern Italy. Launched 1861, it lies along the Milan–Bologna railway. 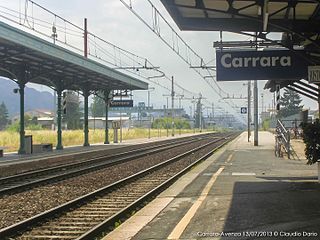 Carrara-Avenza railway station, also known simply as Carrara or Avenza, is a railway station of the city of Carrara, Italy. It is located on the Genova-Pisa line. It is the only station serving the Tuscan city, after the closure of Carrara San Martino in 1969.

The Bologna–Ancona railway is an Italian railway that connects the city of Bologna with the city of Ancona, passing through the Po Valley to Rimini and along the Adriatic coast for the rest of the line.

Media related to Railway stations in Italy at Wikimedia Commons