Lorenzo Jerald Patterson, better known by his stage name MC Ren, is an American rapper, songwriter and record producer from Compton, California. He is the founder and owner of the record label Villain Entertainment.

Percival Noel James Patterson, ON, PC, QC, popularly known as P.J. Patterson, is a Jamaican former politician who served as the sixth Prime Minister of Jamaica from 1992 to 2006. He was the leader of the People's National Party from 1992 to 2006, and the Member of Parliament (MP) for the constituency of Westmoreland South Eastern from 1970 to 1980 and again from 1989 to 1993. Following a constituency reorganization, he served as the MP for Westmoreland Eastern from 1993 to 2006. He retired from all of these positions in January 2006. He was married to Shirley Field-Ridley, with whom he had two children, Richard and Sharon. 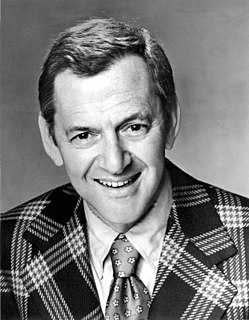 Anthony Leonard Randall was an American actor, comedian and singer. He is best known for his role as Felix Unger in a television adaptation of the 1965 play The Odd Couple by Neil Simon. In a career spanning about six decades, Randall received six Golden Globe Award nominations and six Primetime Emmy Award nominations, winning one.

Alexander John Randall, Baron Randall of Uxbridge is a British politician who served as the Member of Parliament (MP) for Uxbridge from 1997 to 2010 and for Uxbridge and South Ruislip until 2015, before being awarded a life peerage. A member of the Conservative Party, he was Deputy Chief Whip between May 2010 and October 2013, as well as Environment Adviser to Theresa May until July 2019.

William John Patterson was a Liberal politician and Premier of Saskatchewan, Canada. He was first elected to the Legislative Assembly of Saskatchewan in the 1921 election. He succeeded James G. Gardiner to become the province's first Saskatchewan-born premier in 1935. 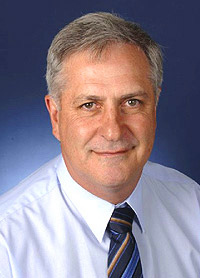 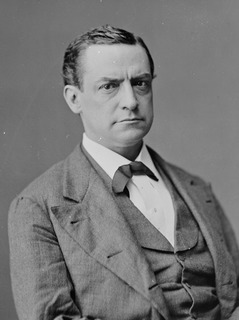 Samuel Jackson Randall was an American politician from Pennsylvania who represented the Queen Village, Society Hill, and Northern Liberties neighborhoods of Philadelphia from 1863 to 1890 and served as the 29th Speaker of the United States House of Representatives from 1876 to 1881. He was a contender for the Democratic Party nomination for President of the United States in 1880 and 1884. 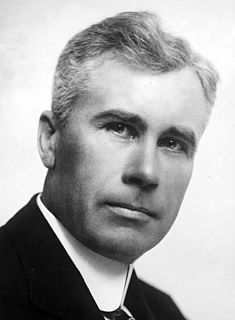 Charles Hiram Randall, known as Charles Randall, was a member of the U.S. House of Representatives, the California State Assembly and the Los Angeles City Council. He was the first council member to face a recall election under the present city charter. To date, he is the only candidate of the Prohibition Party to have been elected to the United States Congress.

Dennis Glen Patterson is a politician and lawyer. He served as MLA for Frobisher Bay and Iqaluit from 1978 to 1995, as NWT Minister of Education, Justice and Municipal Affairs and was chosen as the fifth consensus Government Leader of Northwest Territories, Canada from 1987 to 1991. He headed the campaign that led to the creation of Nunavut in 1999.

Charles Edward Patterson was an American lawyer and politician. 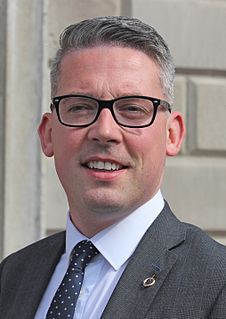 Niall Ó Donnghaile is an Irish Sinn Féin politician who has served as Leader of Sinn Féin in the Seanad since June 2020 and a Senator for the Administrative Panel since April 2016. He previously served as Lord Mayor of Belfast from 2011 to 2012 and a Councillor on Belfast City Council from 2011 to 2016.

This is a list of members of the Australian House of Representatives of the 44th Parliament of Australia (2013–2016), as elected at the 2013 federal election.

Alastair Patterson is a Democratic Unionist Party politician in Northern Ireland. He served as an Ulster Unionist MLA for Fermanagh and South Tyrone, having replaced Neil Somerville following the latter's resignation due to ill health. Patterson lost his seat in the 2016 Assembly Election.

Mark William James Patterson is a New Zealand politician and former Member of Parliament in the House of Representatives for the New Zealand First party. 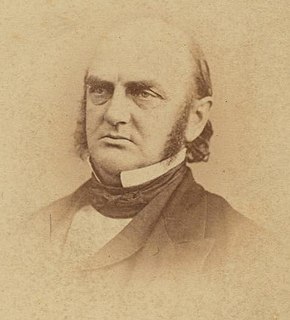 The 1857 gubernatorial election in Wisconsin was held on November 3, 1857. Republican Party candidate Alexander Randall won the election with just over 50% of the vote, defeating Democratic candidate James B. Cross.

Thomas William Randall is a British Conservative Party politician who has been Member of Parliament (MP) for Gedling since the 2019 general election.