Refrain for three players (piano with woodblocks, vibraphone with alpine cowbells, and amplified celesta with antique cymbals) is a chamber-music composition by Karlheinz Stockhausen, and is number 11 in his catalog of works.

Refrain was composed in June and July 1959 on commission from Gerhart von Westerman for the Berlin Festwochen, and is dedicated to Ernst Brücher  [ de ]( Stockhausen 1964 , 101). It was premiered on 2 October 1959 by David Tudor (piano), Cornelius Cardew (celesta), and a percussionist from the WDR Symphony Orchestra, Siegfried Rockstroh (vibraphone), at the Berlin Congresshalle, as part of an all-Stockhausen concert that also included Kreuzspiel , Zeitmaße , Zyklus , and the Klavierstücke I, IV, V, VII, VIII, and XI ( Kurtz 1992 , 98).

The title refers to the disturbance six times of a placid and wide-rangingly composed sound texture by a short refrain ( Stockhausen 1964 , 101). These refrains are notated on a rotatable transparent plastic strip, superimposed on curved staves which allow the refrain to be repositioned in order to introduce these disturbances in different places ( Maconie 2005 , 188).

Each of the three performers plays an accessory instrument in addition to a main instrument. The pianist also plays three woodblocks, the celesta is supplemented with three antique cymbals, and the vibraphonist has three alpine cowbells coupled with three glockenspiel bars. This means that there are six distinct timbres reflecting the pitch structure, which divides the twelve-tone row into two symmetrical six-note cells. This six-element structure is found also in the dynamics, as well as in the durations of both sounds and rests ( Frisius 2008 , 128). The three performers also are required to vocalise tongue clicks on five approximate pitches and short, sharp phonetic syllables to be pitched near the sounds they play, in a manner reminiscent of Japanese theatre ( Harvey 1975 , 87). The basic structure of the background layer of the piece consists of a series of chords derived from an all-interval twelve-tone row that Stockhausen used in a number of other works ( Frisius 2008 , 128–30).

On the whole, performances of Refrain were well-received by the press and public. At an early performance in Venice, although a skeptical reviewer thought "Stockhausen's Refrain and Kontakte seem determined on the disorganization of all conventional musical factors", he nevertheless reported that the "concert had a tremendous success, far more than the normal events" ( Smith Brindle 1960 ). The work's timbres were especially singled out for praise. In a festival report, Ben Johnston described it as "jewel-like" ( Johnston 1963 , 139), and a New York Times critic found "its clusters of attractive percussive sounds" to be "fresh" ( Ericson 1964 ). On an all-Stockhausen programme in 1965, the Times critic found Refrain the "most intriguing of all with its blends of keyboard timbre and percussive sound" ( Anon. 1965 ), and a Los Angeles critic admired its "highly refined, luminous percussion" with "pensive strokes of vibraphone, celesta, and piano six times interrupted and reactivated by the only slightly more dynamic refrain of the title" ( Peterson 1974 ).

Controversy mainly centred on Refrain's unconventional notation and its relation to the resulting music. In a 1962 review of the printed score, Robert Henderson doubted whether "there are people with the energy and enthusiasm to work out in detail the precise significance of all these complex signs and then make from them a performance" and, if there were, whether "the labour involved could ever be justified by the end-product", pronouncing it merely "an amusing musical kaleidescope [ sic ] for those with unlimited amounts of unoccupied time" ( Henderson 1962 ).

Another critic initially shared Henderson's reservations but, "Having heard both these works performed 'live', … I am moved to add that some of the perplexities mentioned above now seem less puzzling. In fact Refrain seemed a fascinating and lively performance on stage. … I was most pleased to discover that the composition 'projected' most successfully" and "the live performance was brilliant, convincing, stimulating, perhaps even fathomable" ( Zimmerman 1963–64 , 241–43).

At around this same time, Peter Stadlen had similarly attacked the notation of Refrain in a programme on BBC Television. For this he was scolded by Tim Souster for having an "obsession with notation", while at the same time seeming oblivious of the fact that "Refrain is one of the finest examples of notation in the history of music". Souster concluded that

One cannot stress too often the importance of letting new music, serial, indeterminate, improvised or electronic, speak directly to the ear, uncluttered by preconceptions or by anxiety about the way the score works. How the music is written down is a very minor consideration to the hundreds of people who fill concerts of Stockhausen's and Cage's music. They respond directly to the audible reality of the music, not to written abstractions, in a way which is all too rare in the critical fraternity. If he trusted his ears, Mr. Stadlen would be a happier man. ( Souster 1969 )

The highest-profile attack on Refrain, however, was made as part of a political polemic by Cornelius Cardew, who had been Stockhausen's assistant and had played celesta in the world premiere. In 1972 Hans Keller asked him to introduce a broadcast of the work on BBC Radio and Cardew, a recent convert to Marxism, seized on its comparative popularity as an opportunity to condemn the composition as "a part of the cultural superstructure of the largest-scale system of human oppression and exploitation the world has ever known: imperialism" ( Cardew 1974 , 46). Writing in what has been described as "the most vulgar style of Marxist conventions" ( Deliège 2003 , 257), Cardew viewed the European avant garde, whose "abstruse, pseudo-scientific tendencies were encouraged in ivory tower conditions" as having been by 1959 "ready to crack from its own internal contradictions". The leading figures of this group, at the head of which stood Stockhausen, were eager to find a broader audience, and achieving this required change. "Refrain was probably the first manifestation of this change in Stockhausen’s work. Since then his work has become quite clearly mystical in character" ( Cardew 1974 , 48). Because "Mysticism says 'everything that lives is holy', so don’t walk on the grass and above all don't harm a hair on the head of an imperialist" ( Cardew 1974 , 50), Refrain "is an ally of imperialism and an enemy of the working and oppressed people of the world", and is comparable with other manifestations of imperialism, specifically "the British Army in Ireland and the mass of unemployed, for example. Here the brutal character of imperialism is evident. Any beauty that may be detected in Refrain is merely cosmetic, not even skin-deep" ( Cardew 1974 , 55).

Publication of the first half of Cardew's lecture in The Listener "provoked a storm in its correspondence columns" ( Cardew 1974 , 55) and, as a result of this and a similar attack on John Cage, Cardew reported that "I temporarily lost my voice at the BBC". According to his testimony, "Punishments were also meted out inside the BBC on account of the Stockhausen broadcast which by mischance was heard by a high official of the Corporation" ( Cardew 1974 , 34). 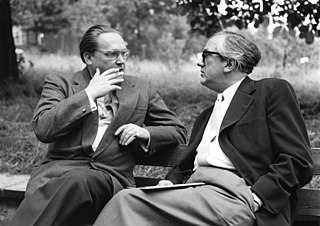 Zyklus für einen Schlagzeuger is a composition by Karlheinz Stockhausen, assigned Number 9 in the composer's catalog of works. It was composed in 1959 at the request of Wolfgang Steinecke as a test piece for a percussion competition at the Darmstadt Summer Courses, where it was premièred on 25 August 1959 by Christoph Caskel. It quickly became the most frequently played solo percussion work, and "inspired a wave of writing for percussion". 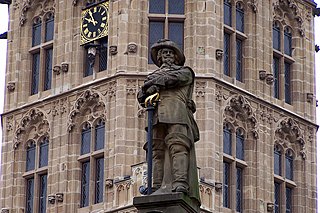 Spiel is a two-movement orchestral composition by Karlheinz Stockhausen, written in 1952. Withdrawn by the composer after its first performance, it was later revised and restored to his catalogue of works, where it bears the work-number ¼. The score is dedicated to the composer's first wife, Doris.