In 2001, Rocky Mountain Construction was established by Fred Grubb and Suanne Dedmon. Fred Grubb previously had experience in the construction industry having worked on custom homes and zoo exhibits. The company has worked on several projects including the construction of roller coasters, water parks, steel buildings, miniature golf courses and go kart tracks. [1]

In late 2011, Schilke announced that the company would be working on two projects throughout 2012 which would both open in 2013. [7] These were later revealed to be an I-Box retrack of The Rattler at Six Flags Fiesta Texas and a new roller coaster designed from scratch at Silver Dollar City named Outlaw Run. [8] [9] The track technology used for Outlaw Run, which allows a square beam of wood to be twisted, took 4 years to develop. It allows Rocky Mountain Construction to design layouts with maneuvers that are not traditionally possible with wooden roller coasters such as heartline rolls. Grubb has stated the technology could be used for new elements in the future. [10] Some new elements were realized with the announcement of Goliath at Six Flags Great America. The ride features a dive loop and a zero-g stall. The ride opened in June 2014. [11]

As of June 2021, Rocky Mountain Construction has built or refurbished 24 roller coasters around the world. Twenty-one of them are currently operating, and three of them are being constructed. [21]

Custom Coasters International (CCI) was one of the premier wooden roller coaster manufacturers in the world and produced 34 wooden coasters in eleven years — more than any other company in recent times. It was located in West Chester, Ohio. 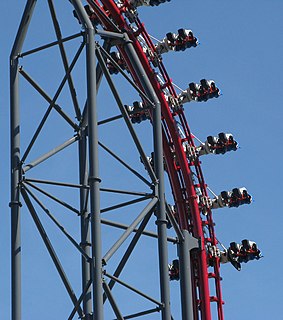 A fourth-dimension roller coaster is a type of steel roller coaster whereby riders are rotated independently of the orientation of the track, generally about a horizontal axis that is perpendicular to the track. The cars do not necessarily need to be fixed to an angle.

A Giant Inverted Boomerang is a type of steel shuttle roller coaster manufactured by the Dutch firm Vekoma. The ride is a larger, inverted version of Vekoma's popular Boomerang sit down roller coasters. As of November 2022, four installations of the model are operating, with another one under construction.

Iron Rattler is a steel roller coaster located at Six Flags Fiesta Texas in San Antonio. Originally opening as a wooden coaster called Rattler in 1992, it was converted to steel and renamed Iron Rattler in 2013. Designed by Alan Schilke and built by Rocky Mountain Construction (RMC), the ride features a zero-g-roll inversion, which was a first among hybrid coasters made of wood and steel.

Storm Chaser is a steel roller coaster located at Kentucky Kingdom in Louisville, Kentucky, United States. Designed by Alan Schilke and manufactured by Rocky Mountain Construction (RMC) at an estimated cost of $10 million, the ride opened to the public on April 30, 2016. It features three inversions, a 78-degree drop, and a maximum speed of 52 mph (84 km/h) utilizing RMC's patented I-Box track technology.

New Texas Giant is a steel roller coaster located at Six Flags Over Texas in Arlington, Texas. It originally opened as Texas Giant, which was the tallest wooden roller coaster in the world when it debuted in 1990. Manufactured by Dinn Corporation and designed by Curtis D. Summers, Texas Giant operated for nearly two decades, ranking first among wooden roller coasters in 1998 and 1999 in the annual Golden Ticket Awards from Amusement Today. Declining popularity as the ride gained a negative reputation for its increasing roughness led to its demise in 2009. 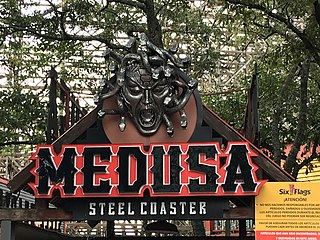 Medusa Steel Coaster, formerly known as simply Medusa, is a steel roller coaster located at Six Flags México in Mexico City. Manufactured by Rocky Mountain Construction (RMC) and designed by Alan Schilke, the ride opened to the public on 14 June 2014. It was originally a wooden coaster constructed by Custom Coasters International that debuted in June 2000. The wooden track was completely removed and replaced with RMC's I-Box track technology, a steel conversion that resulted in a new track layout with increased speed and the addition of three inversions. Medusa was generally well-received, ranking several times in the top 50 among steel roller coasters in the annual Golden Ticket Awards from Amusement Today.

Wikimedia Commons has media related to Rocky Mountain Construction .
This page is based on this Wikipedia article
Text is available under the CC BY-SA 4.0 license; additional terms may apply.
Images, videos and audio are available under their respective licenses.