Until the end of the 1940s, the New South Wales Rugby Union, as the senior rugby organisation in Australia, was responsible for administration of a national representative rugby team, including all tours. However, the various state unions agreed that the future of rugby in Australia would be better served by having a national administrative body and so the Australian Rugby Football Union was formed at a conference in Sydney in 1945, acting initially in an advisory capacity only. [4] Additional impetus came in 1948 when the International Rugby Football Board invited Australia specifically (rather than a New South Wales representative), to take a seat on the Board.

The constitution of the Australian Rugby Football Union was ratified on 25 November 1949 at the inaugural council meeting of eleven delegates from the state unions of New South Wales, Queensland, South Australia, Western Australia, Tasmania and Victoria. [5] [6] The ACT Rugby Union gained membership in 1972. The Northern Territory Rugby Union joined in 1978, initially as an associate union before later being granted membership and voting rights.

In 1985 the Australian Rugby Football Union was incorporated as a company (ACN 002 898 544). In 1997, it was renamed Australian Rugby Union Limited, known as the ARU and again renamed, in 2017, as Rugby Australia Limited.

A founding member, the New South Wales Rugby Union, lost two affiliated regional organisations in 2004 when they affiliated to the ACT Rugby Union which became the ACT and Southern NSW Rugby Union. [7]

Rugby Australia's major sponsor, since 2004, is Qantas. Qantas has had official naming rights for the 'Qantas Wallabies'. [8] [9]

In 2017, the Australian Rugby Union was re-branded Rugby Australia, [10] [11] coinciding with relocating to their new premises in Moore Park, Sydney. [12]

In July 2021, Rugby Australia announced plans are underway to construct an Australian Rugby Museum. It will feature items from Wallabies and Wallaroos history along with the provincial history of the sport, dating back to the late 19th century. [13]

The organisation's governing structures were overhauled in December 2012, [14] following a review authored by the former federal senator and Minister for Sport, Mark Arbib. [15]

Rugby Australia's members (shareholders) include state and territory Rugby unions, together with the owners of the Super Rugby bodies within Australia and the Rugby Union Players' Association (RUPA). [16]

Members exercise their voting rights at the annual general meeting. Under the new constitution adopted in 2012, the eight existing state and territory member unions, the RUPA and each Super Rugby team owner each provide a delegate who has one allocated vote. A delegate from a member union with more than 50,000 registered players in their region is granted a second vote. Only the New South Wales Rugby Union and Queensland Rugby Union exceed that mark at present, so the total number of members' votes is currently sixteen. There are also a number of affiliated groups that do not have voting rights. [16]

Under this revised governance system, a greater share of influence and control shifted from grass roots team and club representation through the state and territory unions to commercial team owners and the professional players association.

Prior to 2012, the voting franchise made no allowance for Super Rugby teams or the Players' Association. There were simply fourteen votes split as follows: [16]

The board must have at least six independent directors, appointed to three-year terms by a two-thirds majority vote of members, in addition to the managing director (chief executive). [18] Up to two further directors may be appointed by ordinary resolution of the board. [18] The board may elect one of the directors as the chair, with the position to be formally reconsidered at least every three years. [19] Executive officers, including the chief executive, are appointed by the board of directors. [20]

Rugby Australia promotes and selects a Hall of Fame honouring notable former players. Each year two or three of Australia's greats from all eras of the international game are selected by an eight-man committee to be inducted into the Wallaby Hall of Fame. Inductees are drawn from all Test teams starting with the first side in 1899. Consideration is given to a player's on-field career but induction is not based on statistical achievement alone.

To be eligible for inclusion in the Wallaby Hall of Fame, a player must have:

In 2017, Rugby Australia management declared itself in favour of same-sex marriage

In 2018, Rugby Australia became involved in a controversy with player and Christian preacher Israel Folau over his social media posts expressing his religious views seeking to save homosexuals from hell when he called on them to "repent of their sins and turn to God". On 17 May 2019, Rugby Australia terminated Folau's player contract. On 6 June 2019, Folau launched legal proceedings with the Fair Work Commission against Rugby Australia and the Waratahs under section 772 of the Fair Work Act, which makes it unlawful to terminate employment on the basis of religion. [39] [40] The Australian Christian Lobby (ACL) announced on 25 June 2019 that it was donating $100,000 to Folau and was setting up an donation site for his legal costs. [41] [42] [43] [44] The campaign raised over $2 million in two days before being paused by the ACL with Folau's consent. [45] On 19 July 2019, the Fair Work Commission issued a certificate confirming all reasonable attempts to resolve the dispute between Folau and Rugby Australia had been unsuccessful. [46] [47] On 1 August 2019, Folau launched legal action in the Federal Circuit Court of Australia, against RA and NSW Rugby for unlawful termination on the basis of religion, breach of contract and restraint of trade. [48] Folau sought an apology, compensation, penalties and the right to play rugby union again. [49] [50] In November 2019, Folau increased his compensation claim against Rugby Australia to $14 million, claiming that he could have been a Wallabies captain. [51] [52]

Folau and Rugby Australia issued a joint statement and apology on 4 December 2019 that stated no harm had been intended by either party and announced that a confidential settlement had been reached. [53] [54]

Rugby Australia's parlous financial position following the Folau affair became apparent upon the COVID-19 outbreak in 2020 when it was forced to lay off three quarters of its employees and seek agreements with players to reduce payments. The CEO, Raelene Castle was replaced and calls continued for a shake-up of the board and management.

The Sydney University Football Club, founded in 1863, is the oldest club now playing rugby union in Australia, although this date is disputed by historian Tom Hickie who argues that it was 1865.

Timana James Aporo Tahu is an Australian former professional rugby league and rugby union footballer. He last played for Denver Stampede in the US PRO Rugby competition. A dual-code international representative three-quarter back for Australia's Kangaroos and then the Wallabies, he could also play second-row and played for New South Wales in State of Origin. Tahu started his career in the National Rugby League for the Newcastle Knights, with whom he won the 2001 NRL Premiership before moving to the Parramatta Eels. He then played for the New South Wales Waratahs in the Super Rugby competition. Tahu returned to the NRL with the Eels and then the Penrith Panthers before finishing his NRL career where it started with the Newcastle Knights.

John Anthony O'Neill is an Australian sporting administrator and businessman. He has been involved with both rugby union and soccer at the national level, after being head of the State Bank of New South Wales. 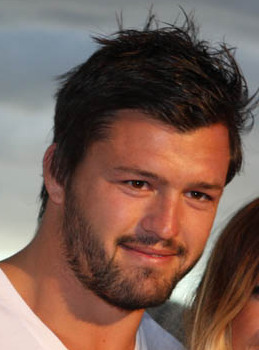 Adam Ashley-Cooper is a former Australian rugby union player who last played for the LA Giltinis of Major League Rugby (MLR). He has won 121 caps for Australia, the third most of any Australia player. His nickname is "Mr. Versatile". He is currently the senior assistant coach for backs with the LA Giltinis. 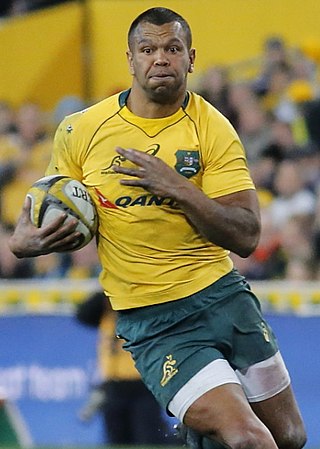 Kurtley James Beale is an Australian professional rugby union representative player who has made over 90 national representative appearances in a ten-year playing career at the world-class level. He is of Aboriginal descent, has had a long Super Rugby career with the New South Wales Waratahs and has played for the Melbourne Rebels and the Wasps club in England. Beale mainly plays at full-back or centre but can play fly-half or winger. In 2011 Beale received the John Eales Medal, awarded to Australian rugby's Player of the Year.

The Sydney Stars is a former Australian rugby union football team that competed in the National Rugby Championship (NRC) in 2014 and 2015. The Stars team was established as a joint venture between the Sydney University and Balmain rugby clubs, and was one of four New South Wales teams in the competition.

Sekope Kepu is an Australian professional rugby union player. He is a prop and currently plays for Moana Pasifika in Super Rugby. He has previously played for Australian club New South Wales Waratahs, the French club Bordeaux, and London Irish. He also plays for Australia's Wallabies in international matches. Kepu made his international debut for Australia in 2008 and has been a regular in match-day squads ever since, now having played over 100 tests. Kepu is the most-capped prop to ever play for the Wallabies and is also one of the most-capped rugby players in history.

The Rugby Union Players' Association (RUPA) is the representative body for professional rugby union players in Australia. It was formed in October 1995 in response to the professionalism of rugby.

Ben McCalman is a former Australian rugby union footballer, playing for the Western Force in the international Super Rugby competition, and Australia.

Nicholas James Phipps is an Australian rugby union player who plays for the Australia national team, at club level he is unattached most recently playing for London Irish in England's Premiership Rugby. 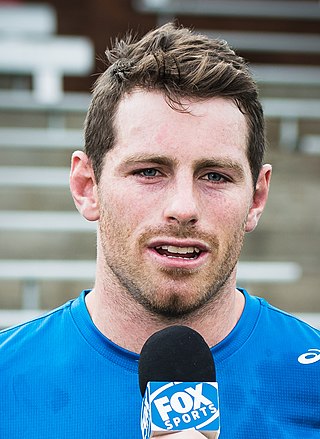 Bernard Foley is an Australian rugby player of Irish descent. He plays professionally for the Australia national rugby team and the New South Wales Waratahs in Super Rugby. He can cover both fullback and fly-half as well as inside centre. Foley has earned the nickname "the iceman" after successful game winning penalty goals, 2 August 2014, 18 October 2015. 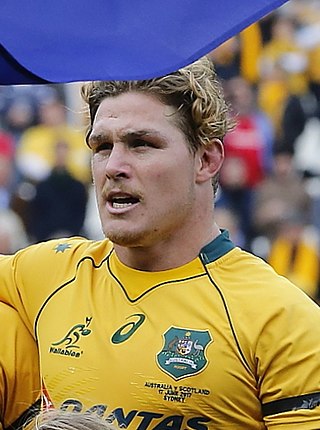 Michael Kent Hooper is an Australian professional rugby union player who is captain of the Australia national team, the Wallabies. His playing position is openside flanker.

The New South Wales Country Eagles is an Australian rugby union football team competes in the National Rugby Championship (NRC). The team was founded by a group of patrons associated with country rugby in New South Wales. The Eagles team plays home matches in regional centres of New South Wales including Armidale, Goulburn, Orange, and Tamworth.

John Folau is a rugby league and rugby union footballer who plays for the Sydney Rays in the National Rugby Championship competition. He is a former Tonga international rugby league footballer.

The Under-19s Rugby Championship is an Australian rugby union competition for men's youth teams that forms part of the pathway for selection to the Junior Wallabies. The competition is hosted annually by Rugby Australia and players must meet an under-19 age requirement. Previously, this tournament was played closer in time to the World Junior Championship and used an under-20 age requirement.

Mark Nawaqanitawase is an Australian rugby union player who plays for the NSW Waratahs in Super Rugby and Australian national team, the Wallabies.