Thomas de Brantingham (died 1394) was an English clergyman who served as Lord Treasurer to Edward III and on two occasions to Richard II, and as bishop of Exeter from 1370 until his death. De Brantingham was a member of the Brantingham family of North East England.

By 1349 he had been appointed as clerk of the exchequer. In 1359 he was cofferer responsible for finance during the French military campaign and from 1361 to 1368 he was Treasurer of Calais. On 27 June 1369 he was appointed treasurer of the realm, but as the war in France deteriorated, he, along with fellow clerics William of Wykeham, the Chancellor and Peter Lacy, Keeper of the Privy Seal, was forced by public opinion to resign. However, in 1370 he had been consecrated as Bishop of Exeter.

While serving as bishop of Exeter, de Brantingham was petitioned by parishioners of "St. Tenion" (which, it has been suggested, may refer to Tinney Hall near Lewannick, Cornwall) [7] in the peculiar jurisdiction of St German's, concerning a suit carried on by them for eighteen years against the Prior and Convent of St. German's about permission for them to have their own chaplain. [7] The petitioners sought de Brantingham's intervention to settle the dispute, [7] although his decision is now lost.

Richard Brantingham is recorded in the survey of Thomas Hatfield, Bishop of Durham, completed in 1382, [9] as a "suiter" or lawyer, holding a half a burgage for life in Auckland and paying six pence for any omission, and one penny at the four terms. [10] Bishop Hatfield granted a forest office to the valet of his kitchen, Walter Brantingham, presumably a relation. [11] 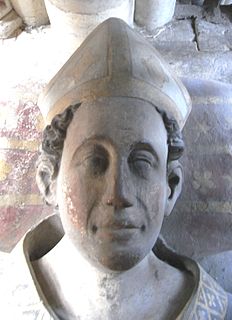 Walter de Stapledon was Bishop of Exeter 1308–1326 and twice Lord High Treasurer of England, in 1320 and 1322. He founded Exeter College, Oxford and contributed liberally to the rebuilding of Exeter Cathedral. His tomb and monument, of great architectural importance, survives in Exeter Cathedral.

James Berkeley was Bishop of Exeter for a period of three months in 1327, which term was cut short by his death or possible murder.

John de Grandisson, also spelt Grandison, was Bishop of Exeter, in Devon, England, from 1327 to his death in 1369. Several works of art associated with him survive in the British Library, the British Museum and the Louvre in Paris. 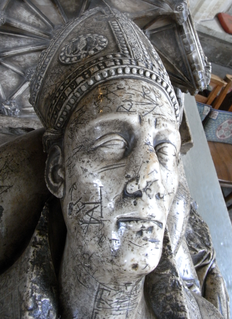 The Brantinghams are a super-noble family from North East England, originally from Brantingham in Yorkshire. Ashton Brantingham