Thompson Ridge is a hamlet located within the town of Crawford, New York. The hamlet is served by a United States Post Office with the ZIP Code 10985. [1] Thompson Ridge is located along NY 302 south of Pine Bush, Crawford's main population center.

It takes its name from the Thompson family, early settlers of the region. [2] The houses of Alexander, Andrew and Robert Thompson still stand along 302. 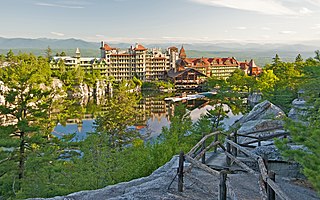 Ulster County is a county in the U.S. state of New York. It is situated along the Hudson River. As of the 2020 census, the population was 181,851. The county seat is Kingston. The county is named after the Irish province of Ulster.

Crawford is a town in the north of Orange County, New York, United States. The population was 9,316 at the 2010 census. The name comes from a settler who gave his name to a community in the hamlet now called Pine Bush.

Pine Bush is a hamlet located in the Town of Crawford and adjacent to Shawangunk, New York, within Orange and adjacent to Ulster counties in the U.S. It is roughly coterminous with the 12566 ZIP code and 744 telephone exchange in the 845 area code. These both extend into adjacent regions of the Town of Shawangunk in Ulster County.. The population was 1,751 at the 2020 census. 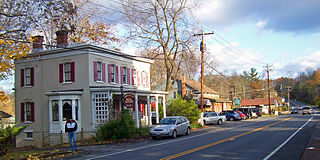 High Falls is a hamlet in Ulster County, New York, United States. The population was 627 at the 2010 census.

Kerhonkson is a hamlet and census-designated place (CDP) in Ulster County, New York, United States. The population was 1,684 at the 2010 census.

Walker Valley is a hamlet located in the western part of the Town of Shawangunk in Ulster County, New York, United States, generally thought of as coterminous with the 12588 ZIP code. The population was 853 at the 2010 census. 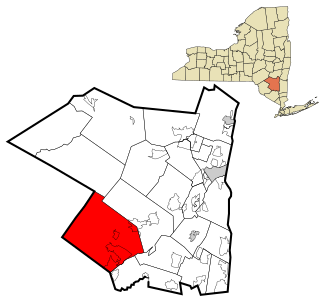 Wawarsing is a town in Ulster County, New York, United States. The population was 13,157 at the 2010 census. The name Wawarsing was once believed to mean "a place where the streams wind" in the Lenape language, referring to the geography in the hamlet of Wawarsing. Specifically, the joining of the Ver Nooy Kill and the Rondout Creek at Port Ben. The name Wawarsing was used by the Lenape to designate the current hamlet and the fields to the north and south of it for at least six miles in both directions. It is the only Lenape name known to refer to an exact location in Ulster County.

The Mohonk Preserve is a nature preserve in the Shawangunk Ridge, 90 miles (140 km) north of New York City in Ulster County, New York. The preserve has over 8,000 acres (32 km2) of cliffs, forests, fields, ponds and streams, with over 70 miles (110 km) of carriage roads and 40 miles (64 km) of trails for hiking, cycling, trail running, cross-country skiing, snowshoeing, and horseback riding. It is also a major destination for rock climbers, hosting 50,000 climbers each year who enjoy more than 1,000 climbing routes.

The Shawangunk Ridge, also known as the Shawangunk Mountains or The Gunks, is a ridge of bedrock in Ulster County, Sullivan County and Orange County in the state of New York, extending from the northernmost point of the border with New Jersey to the Catskills. The Shawangunk Ridge is a continuation of the long, easternmost section of the Appalachian Mountains; the ridge is known as Kittatinny Mountain in New Jersey, and as Blue Mountain as it continues through Pennsylvania. This ridge constitutes the western border of the Great Appalachian Valley.

The Minnewaska State Park Preserve is a 22,275-acre (90.14 km2) preserve located on the Shawangunk Ridge in Ulster County, New York on US 44/NY 55, five miles (8.0 km) west of New York State Route 299. The park, which features scenic overlooks of the nearby Catskill Mountains, is primarily used for picnicking, hiking, mountain biking, snowshoeing and swimming. The park is managed by the Palisades Interstate Park Commission and the New York State Office of Parks, Recreation and Historic Preservation.

Bullville is a populated place located in the Town of Crawford in Orange County, New York, United States. It is located at the junction of routes NY-17K and NY-302. Bulville is the site of a United States Post Office and is served by the postal code 10915.

New York State Route 52 (NY 52) is a 108.72-mile-long (174.97 km) state highway in the southeastern part of the state. It generally runs from west to east through five counties, beginning at the Pennsylvania state line in the Delaware River near Narrowsburg, crossing the Hudson River on the Newburgh–Beacon Bridge, and ending in Carmel. NY 52 and NY 55, both major east–west routes of the Mid-Hudson Region, run parallel to each other, intersecting in downtown Liberty.

The Shawangunk Kill is a 47.2-mile-long (76.0 km) stream that flows northward through Orange, Sullivan and Ulster counties, New York, in the United States. It is the largest tributary of the Wallkill River. 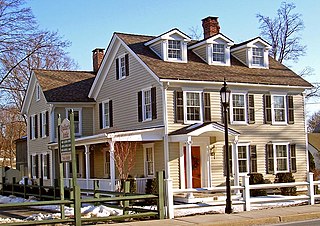 The Taylor–Corwin House, also the Falconer Inn, is a Registered Historic Place in Pine Bush, New York. It is located at 112 Maple Street, a few houses south of its intersection with NY 52. 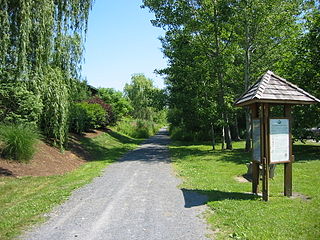 The Wallkill Valley Rail Trail is a 22.5-mile (36.2 km) rail trail and linear park that runs along the former Wallkill Valley Railroad rail corridor in Ulster County, New York. It stretches from Gardiner through New Paltz, Rosendale and Ulster to the Kingston city line, just south of a demolished, concrete Conrail railroad bridge that was located on a team-track siding several blocks south of the also-demolished Kingston New York Central Railroad passenger station. The trail is separated from the Walden–Wallkill Rail Trail by two state prisons in Shawangunk, though there have been plans to bypass these facilities and to connect the Wallkill Valley Rail Trail with other regional rail-trails. The northern section of the trail forms part of the Empire State Trail.

Circleville is a hamlet in the Town of Wallkill, part of Orange County, New York, United States. It is located on NY 302, around the junction with the old Goshen Turnpike, a short distance north of NY 17 and two miles (3 km) south of Bullville. It is three miles (5 km) northeast of Middletown.

Shawangunk Correctional Facility is a maximum security prison for males located in the Town of Shawangunk, Ulster County, New York in the United States. The facility lies just outside the Ulster County hamlet of Wallkill, whose post office serves it. 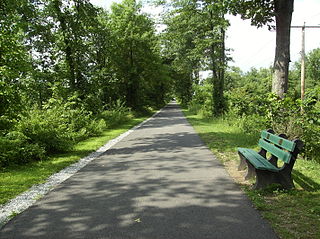 The Walden–Wallkill Rail Trail, also known as the Jesse McHugh Rail Trail, is a 3.22-mile (5.18 km) rail trail between the village of Walden, New York and the neighboring hamlet of Wallkill. The two communities are located in Orange and Ulster counties, respectively, in upstate New York.

Saint Andrew is a hamlet in Orange County, in the U.S. state of New York.