The sympathetic trunks are a paired bundle of nerve fibers that run from the base of the skull to the coccyx. 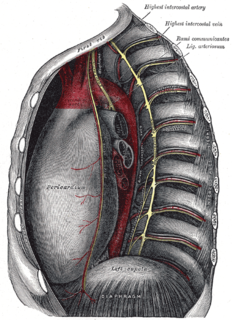 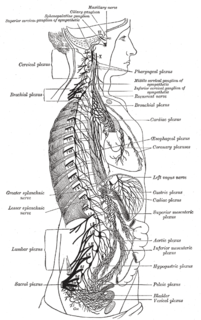 The celiac plexus or coeliac plexus, also known as the solar plexus because of its radiating nerve fibers, is a complex network of nerves located in the abdomen, near where the celiac trunk, superior mesenteric artery, and renal arteries branch from the abdominal aorta. It is behind the stomach and the omental bursa, and in front of the crura of the diaphragm, on the level of the first lumbar vertebra.

The abdominal aortic plexus is formed by branches derived, on either side, from the celiac plexus and ganglia, and receives filaments from some of the lumbar ganglia.

The superior hypogastric plexus is a plexus of nerves situated on the vertebral bodies anterior to the bifurcation of the abdominal aorta.

Sympathetic ganglia are the ganglia of the sympathetic nervous system. They deliver information to the body about stress and impending danger, and are responsible for the familiar fight-or-flight response. They contain approximately 20,000–30,000 nerve cell bodies and are located close to and on either side of the spinal cord in long chains. Sympathetic ganglia are the tissue from which neuroblastoma tumours arise.

The superior mesenteric plexus is a continuation of the lower part of the celiac plexus, receiving a branch from the junction of the right vagus nerve with the plexus.

The dorsal nerve of the penis is the deepest division of the pudendal nerve; it accompanies the internal pudendal artery along the ramus of the ischium; it then runs forward along the margin of the inferior ramus of the pubis, between the superior and inferior layers of the fascia of the urogenital diaphragm.