Although the word θράσος itself could be used both in the positive ("courage") and the negative ("over-boldness, insolence") senses, [1] in the only context where Thrasos appears as a personification (a daemon), it is definitely a malicious and suspicious being, mentioned together with Hybris and Atë and opposed to Dike. [2] [3]

The following is a family tree of gods, goddesses and many other divine and semi-divine figures from Ancient Greek mythology and Ancient Greek religion.

Arial, sometimes marketed or displayed in software as Arial MT, is a realist sans-serif typeface and set of computer fonts. Fonts from the Arial family are packaged with all versions of Microsoft Windows from Windows 3.1 onwards, some other Microsoft software applications, Apple's macOS and many PostScript 3 computer printers. The typeface was designed in 1982, by Robin Nicholas and Patricia Saunders, for Monotype Typography. It was created to be metrically identical to the popular typeface Helvetica, with all character widths identical, so that a document designed in Helvetica could be displayed and printed correctly without having to pay for a Helvetica license. 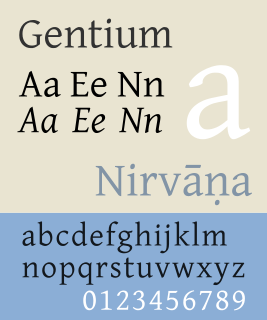 Gentium is a Unicode serif typeface designed by Victor Gaultney. Gentium fonts are free and open source software, and are released under the SIL Open Font License (OFL), which permits modification and redistribution. Gentium has wide support for languages using the Latin, Greek, and Cyrillic alphabets, and the International Phonetic Alphabet. Gentium Plus variants released in November 2010 now include over 5,500 glyphs and advanced typographic features through OpenType and Graphite.

Thraso, latinized as Thrason, was an Indo-Greek king in Central and Western Punjab, unknown until the 1982 discovery of one of his coins by R. C. Senior in the Surana hoard. The coin is in a style similar to those of Menander I, has the same type of Athena, and shares one of Menander's mint marks. On the coin, the title of Thraso is Basileus Megas, a title which only Eucratides the Great had dared take before him and which is seemingly misplaced on the young boy Thraso, whose single preserved coin indicates a small and insignificant reign.

The Greek Super Cup, officially known as the Cup of Friendship and Solidarity was a Greek association football one-match competition which was contested annually by the Super League champion club and the winners of the Greek Cup

Eunuchus is a comedy written by the 2nd century BCE Roman playwright Terence featuring a complex plot of familial misunderstanding. It was Terence's most successful play during his lifetime. Suetonius notes how the play was staged twice in a single day and won Terence 8,000 sesterces.. The play is a loose translation of one written by Menander in Greek.

Nikos Gatsos was a Greek poet, translator and lyricist.

GNU FreeFont is a family of free OpenType, TrueType and WOFF vector fonts, implementing as much of the Universal Character Set (UCS) as possible, aside from the very large CJK Asian character set. The project was initiated in 2002 by Primož Peterlin and is now maintained by Steve White.

The following is a family tree for the Kings of the Hellenes of the House of Schleswig-Holstein-Sonderburg-Glücksburg, which ruled Greece between the election of Prince Wilhelm of Denmark to replace Otto of Greece in 1863 until the declaration of the Second Hellenic Republic in 1924, and again from 1935 until the abolition of the monarchy during the reign of King Constantine II in 1973. Those who ruled Greece are given in bold capitals.

Orestias was an ancient Greek settlement next to the Maritsa river, near or at the site of present-day Edirne, and close to the current border between Turkey and Greece.

Achlyodes mithridates, the sickle-winged skipper or Jung's dusky wing, is a butterfly of the family Hesperiidae. It is found from Argentina, north through tropical America and the West Indies to southern Texas. A regular stray north to central Texas, rarely to Arkansas and Kansas.

Prince Achileas-Andreas of Greece and Denmark is a member of the Greek royal family. He is the second son and third child of Crown Prince Pavlos of Greece and Marie-Chantal Miller. His paternal grandparents are Constantine II of Greece and Anne-Marie of Denmark, who were the last King and Queen of the Hellenes. He is currently third in the line of succession to the former Greek throne.

Mavra Mesanychta it is a Greek series that was broadcast at Mega Channel. The writer of this black comedy is the actor and also writer Vasilis Risvas(Βασίλης Ρίσβας) which has one of main role in the comedy and the writer Demeter Sakalis.

Camponotus thraso is a species of carpenter ant. The type species is found from Sri Lanka.

Thrasops is a genus of snakes in the family Colubridae. The genus is endemic to Africa.