In Greek mythology, Eos ( /ˈiːɒs/ ; Ionic and Homeric Greek ἨώςĒṓs, Attic ἝωςHéōs, "dawn", pronounced  [ɛːɔ̌ːs] or [héɔːs] ; Aeolic ΑὔωςAúōs, Doric ἈώςĀṓs) [1] is a Titaness and the goddess [2] of the dawn, who rose each morning from her home at the edge of the Oceanus.

The Proto-Greek form of Ἠώς / Ēṓs has been reconstructed as *ἀυhώς / auhṓs, and in Mycenaean Greek as *hāwōs. [1] [3] According to Robert S. P. Beekes, the loss of the initial aspiration could be due to metathesis. [1] It is cognate to the Vedic goddess Ushas , Lithuanian goddess Aušrinė , and Roman goddess Aurora (Old Latin Ausosa), all three of whom are also goddesses of the dawn. [4]

Eos was the daughter of the Titans Hyperion and Theia: Hyperion, a bringer of light, the One Above, Who Travels High Above the Earth and Theia, The Divine, [5] also called Euryphaessa, "wide-shining" [6] and Aethra, "bright sky". [7] Eos was the sister of Helios, god of the sun, and Selene, goddess of the moon, "who shine upon all that are on earth and upon the deathless gods who live in the wide heaven". [8] The generation of Titans preceded all the familiar deities of Olympus who largely supplanted them. In some accounts, Eos' father was called Pallas. [9] [10]

Goddess of the dawn

The dawn goddess Eos was almost always described with rosy fingers or rosy forearms as she opened the gates of heaven for the Sun to rise. [27] In Homer, [28] her saffron-colored robe is embroidered or woven with flowers; [29] rosy-fingered and with golden arms, she is pictured on Attic vases as a beautiful woman, crowned with a tiara or diadem and with the large white-feathered wings of a bird.

"Now when Dawn in robe of saffron was hastening from the streams of Oceanus, to bring light to mortals and immortals, Thetis reached the ships with the armor that the god had given her." [30]
"But soon as early Dawn appeared, the rosy-fingered, then gathered the folk about the pyre of glorious Hector." [31]

She is most often associated with her Homeric epithet "rosy-fingered" Eos Rhododactylos (Ancient Greek : Ἠὼς Ῥοδοδάκτυλος), but Homer also calls her Eos Erigeneia:

"That brightest of stars appeared, Eosphoros, that most often heralds the light of early-rising Dawn (Eos Erigeneia)." [32]

"And after these Erigeneia ["Early-born"] bore the star Eosphoros ("Dawn-bringer"), and the gleaming stars with which heaven is crowned." [33]

Thus Eos, preceded by the Morning Star, is seen as the genetrix of all the stars and planets; her tears are considered to have created the morning dew, personified as Ersa or Herse. [34]

Eos' team of horses pull her chariot across the sky and are named in the Odyssey as "Firebright" and "Daybright". While Quintus described her exulting in her heart over the radiant horses (Lampus and Phaëton) that drew her chariot, amidst the bright-haired Horae, the feminine Hours, climbing the arc of heaven and scattering sparks of fire. [35]

Eos fell in love several times. According to Pseudo-Apollodorus, it was the jealous Aphrodite who cursed her to be perpetually in love and have an insatiable sexual desire because once had Eos lain with Aphrodite's sweetheart Ares, the god of war. [36] This caused her to abduct a number of handsome young men, most notably Cephalus, Tithonus, Orion, and Cleitus. The good-looking Cleitus was made immortal by her. [37] She also asked for Tithonus to be made immortal, but forgot to ask for eternal youth, which resulted in him living forever as a helpless old man. [38] Out of pity, she turned him into a cicada.

According to Hesiod, by Tithonus, Eos had two sons, Memnon and Emathion. [39] Memnon fought among the Trojans in the Trojan War and was slain. Her image with the dead Memnon across her knees, like Thetis with the dead Achilles are icons that inspired the Christian Pietà [ citation needed ].

The abduction of Cephalus had special appeal for an Athenian audience because Cephalus was a local boy, [40] and so this myth element appeared frequently in Attic vase-paintings and was exported with them. In the literary myths, Eos kidnapped Cephalus when he was hunting and took him to Syria. [39] [41] [42] [43] [44]

The second-century CE traveller Pausanias was informed that the abductor of Cephalus was Hemera, goddess of Day. [45] Although Cephalus was already married to Procris, Eos bore him three sons, including Phaeton and Hesperus, but he then began pining for Procris, causing a disgruntled Eos to return him to her and put a curse on them.

In Hyginus' report, Cephalus accidentally killed Procris some time later after he mistook her for an animal while hunting. [43]

In Ovid's account, Procris, a jealous wife, was spying on him and heard him singing to the wind, but thought he was serenading his ex-lover Eos. [44]

There are no known temples, shrines, or altars to Eos. However, Ovid seems to allude to the existence of at least two shrines of Eos, as he describes them in plural, albeit few, in the lines:

[Eos addresses Zeus :] ‘Least I may be of all the goddesses the golden heavens hold – in all the world my shrines are rarest.’ [46]

Ovid may therefore have known of at least two such shrines.

Among the Etruscans, the generative dawn-goddess was Thesan. Depictions of the dawn-goddess with a young lover became popular in Etruria in the fifth century, probably inspired by imported Greek vase-painting. [47] Though Etruscans preferred to show the goddess as a nurturer (Kourotrophos) rather than an abductor of young men, the late Archaic sculptural acroterion from Etruscan Cære, now in Berlin, showing the goddess in archaic running pose adapted from the Greeks, and bearing a boy in her arms, has commonly been identified as Eos and Cephalus. [48] On an Etruscan mirror Thesan is shown carrying off a young man, whose name is inscribed as Tinthu. [49]

The Roman equivalent of Eos is Aurora, also a cognate showing the characteristic Latin rhotacism. Dawn became associated in Roman cult with Matuta, later known as Mater Matuta. She was also associated with the sea harbors and ports, and had a temple on the Forum Boarium. On June 11, the Matralia was celebrated at that temple in honor of Mater Matuta; this festival was only for women during their first marriage. 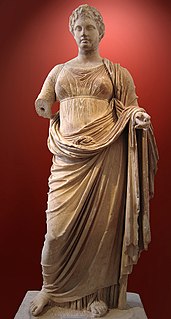 Themis is an ancient Greek Titaness. She is described as "[the Lady] of good counsel", and is the personification of divine order, fairness, law, natural law, and custom. Her symbols are the Scales of Justice, tools used to remain balanced and pragmatic. Themis means "divine law" rather than human ordinance, literally "that which is put in place", from the Greek verb títhēmi (τίθημι), meaning "to put".

In Greek mythology Hemera was the personification of day and one of the Greek primordial deities. She is the goddess of the daytime and, according to Hesiod, the daughter of Erebus and Nyx.

Agrius in Greek mythology, is a name that may refer to:

In Greek mythology, Hippothoe is the name of five distinct characters.

In Greek mythology, Theia, also called Euryphaessa "wide-shining", is a Titaness. Her brother/consort is Hyperion, a Titan and god of the sun, and together they are the parents of Helios, Selene, and Eos. She may be the same with Aethra, the consort of Hyperion and mother of his children in some accounts.

In Greek mythology, Deioneus or Deion is a name attributed to the following individuals:

In Greek mythology, Iapetus was a Titan, the son of Uranus and Gaia and father of Atlas, Prometheus, Epimetheus, and Menoetius. He was also called the father of Buphagus and Anchiale in other sources.

In Greek mythology, Hyperion was one of the twelve Titan children of Gaia (Earth) and Uranus (Sky) who, led by Cronus, overthrew their father Uranus and were themselves later overthrown by the Olympians. With his sister, the Titaness Theia, Hyperion fathered Helios (Sun), Selene (Moon) and Eos (Dawn). Keats's abandoned epic poem Hyperion is among the literary works that feature the figure.

In Greek mythology, Pallas was one of the Titans. According to Hesiod, he was the son of Crius and Eurybia, the brother of Astraeus and Perses, the husband of Styx, and the father of Zelus, Nike ("Victory"), Kratos, and Bia. Hyginus says that Pallas, whom he calls "the giant", also fathered with Styx: Scylla, Fontes ("Fountains") and Lacus ("Lakes"). Pallas was sometimes regarded as the Titan god of warcraft and of the springtime campaign season.

In Greek mythology, Phaethon was a son of Eos by Cephalus of Athens or Tithonus, born in Syria.

In Greek mythology, Electra was the Oceanid daughter of Oceanus and Tethys. According to Hesiod, she was the wife of Thaumas, and by him, the mother of Iris, the goddess of rainbows and a messenger for the gods, and the Harpies.

In Greek mythology, Callirrhoe, Callirhoe or occasionally Kallirroi may refer to the following characters:

In Greek mythology, Actaea may refer to the following figures:

In Greek mythology, Autonoë may refer to the following personages:

Euryale, in Greek mythology, was the second eldest of the Gorgons, the three sisters that have the hair of living, venomous snakes.

In Greek mythology, Agave may refer to the following characters:

By some accounts described in Greek mythology, Cephalus (; Ancient Greek: Κέφαλος Kephalos was an Athenian son of Hermes and Herse. His great beauty caused Eos to fall in love with him. He was eventually carried off and ravished by her in Syria. Consorting with the goddess, by some accounts Cephalus became the father of Tithonus, the father of Phaethon. In some accounts, he was the son of Hermes by Creusa or of Pandion while Phaeton was said to be his son instead of Tithonus.

‹ The template below ( Greek mythology (deities) ) is being considered for merging. See templates for discussion to help reach a consensus. ›
This page is based on this Wikipedia article
Text is available under the CC BY-SA 4.0 license; additional terms may apply.
Images, videos and audio are available under their respective licenses.