Three Tree Point is a low, gravelly, triangle-shaped spit jutting into the east side of Puget Sound. It is about the midpoint between Seattle and Tacoma. It is referred to on some navigation charts as "Point Pully", in recognition of crew member Robert Pulley of the Wilkes Expedition. [1]

In early years of development on Three Tree Point, a dock was built on the north beach. The area then was primarily used as for resort or summer homes and cabins. As the area grew with more permanent residents, a clubhouse called "The Cove" was built with a tennis court and dance floor area, which was used frequently for events, parties, etc. During the early years of World War II, lookouts would take turns in the light tower, searching the skies for possible enemy planes.

Today, Three Tree Point is a densely populated residential area where much attention has been paid toward tree preservation. The surrounding waters are popular among scuba divers. 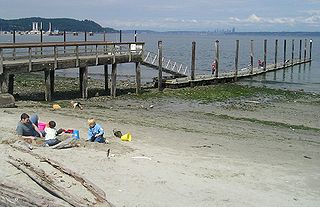 Manchester is an unincorporated community and census-designated place (CDP) in Kitsap County, Washington, United States. The population was 5,413 at the 2010 census.

Poulsbo is a city on Liberty Bay in Kitsap County, Washington, United States. It is the smallest of the four cities in Kitsap County. The population was 9,200 at the 2010 census and an estimated 10,927 in 2018. 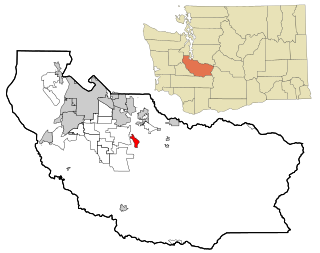 Orting is a city in Pierce County, Washington, United States. As of the 2010 census, the city's population is 7,983.

Seward Park is a neighborhood in southeast Seattle, Washington just west of the park of the same name. It is part of Seattle's South End. The park itself occupies all of Bailey Peninsula, which juts into Lake Washington. The attached map is accurate, broadly speaking, in capturing "Greater Seward Park," though real estate sites, such as Zillow, will refer to the part of the neighborhood north of Orcas Street as Lakewood, which is reasonable, since that neighborhood is the historic home of a "community club" once known as the Lakewood Community Club, and now known as the Lakewood-Seward Community Club. 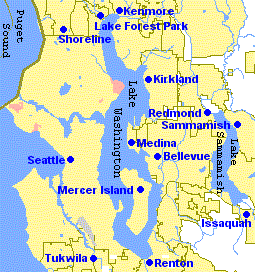 The Eastside of the King County, Washington area in the United States is a collective term for the suburbs of Seattle located on the east side of Lake Washington. In this context, Westside is synonymous with Seattle.

Madrona Park is a 31.2 acre park located in the Madrona neighborhood of Seattle, Washington, bisected by Lake Washington Boulevard. It lies on the western shore of Lake Washington and features picnic areas, a swimming beach with bathhouse, and parking area. West of the campground is a tree-covered hillside and ravine featuring walking paths and Madrona Creek.

Carkeek Park is a 216 acres (87 ha) park located in the Broadview neighborhood of Seattle, Washington. The park contains Piper Orchard, Pipers Creek, play and picnic areas, picnic shelters, and hiking trails. A pedestrian bridge across the main lines of the BNSF Railway connects to the Carkeek Park sand beach on Puget Sound. Park program activities are largely out of the Carkeek Park Environmental Learning Center. 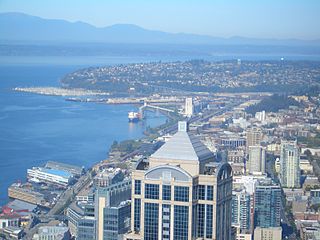 Magnolia is the second largest neighborhood of Seattle, Washington by area. It occupies a hilly peninsula northwest of downtown. Magnolia has been a part of the city since 1891. A good portion of the peninsula is taken up by Discovery Park, formerly the U.S. Army's Fort Lawton.

Mukilteo Lighthouse Park encompasses the lighthouse at the west end of the city of Mukilteo, Washington, and 12 acres (0.049 km2) south of it. The property is west and south of the Washington State Ferries terminal with ferry service to Clinton, Whidbey Island, and is bordered on the south and east by the BNSF Railway main line. Whidbey Island lies across a narrow portion of Possession Sound and is easily visible from the shore.

View Ridge is a neighborhood in north Seattle, Washington. As with all Seattle neighborhoods, its boundaries are not fixed, but can be thought of as NE 65th Street in the south, 40th and 45th Avenues NE in the west, the Sand Point Country Club in the north, and Sand Point Way NE in the east. Many homes offer views of Lake Washington, Mount Rainier, and the Cascade Range. View Ridge Elementary School is located within the neighborhood, and the neighborhood also offers a large park and playfield across the street from the elementary school. The View Ridge Swim and Tennis Club is located on the eastern edge of View Ridge, and the Sand Point Country Club is located on the northern edge. 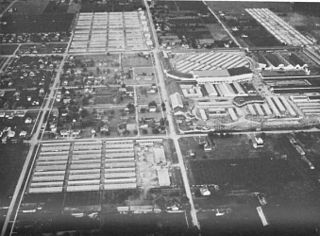 Camp Harmony was the unofficial euphemistic name of the Puyallup Assembly Center, a temporary facility within the system of internment camps set up for Japanese Americans during World War II. Approximately 7,390 Americans of Japanese descent from Western Washington and Alaska were sent to the camp before being transferred to the War Relocation Authority camps at Minidoka, Idaho, Tule Lake, California and Heart Mountain, Wyoming.

Old Man House was the largest "bighouse" in what is now the U.S. state of Washington, and once stood on the shore of Puget Sound. Lying at the center of the Suquamish winter village on Agate Pass, just south of the present-day town of Suquamish, it was home to Chief Sealth and Chief Kitsap.

Browns Point is a census-designated place (CDP) in Pierce County, Washington, United States, bordered by Tacoma on the east and Puget Sound on all other sides. The population was 1,198 at the 2010 census. The Tacoma neighborhood immediately adjacent to Browns Point is also referred to locally as "Browns Point".

Orting High School is a high school located in Orting, Washington that serves students from grades 9-12 in the Orting and surrounding areas. The mascot is the Cardinal, and the Orting Cardinals was a member of the Nisqually League. OHS is now part of the SPSL 2A league.

Melmont is a ghost town in Pierce County, Washington, USA. The town was founded in 1900 when the Northwest Improvement Company, a subsidiary of Northern Pacific Railway, started the Melmont coal mine. The town consisted of a schoolhouse, a train depot, a saloon, a hotel, and rows of cottages that were used as housing for the miners. Each row accommodated a different nationality, the miners being seemingly self-segregated. The coal was used exclusively for use by Northern Pacific, and when they switched from steam locomotives to diesel and electric models, the economic base of the town was destroyed.

Priest Point Park is a public park located in Olympia, Washington. Established in 1905, it was the city's first waterfront park, providing access to the Budd Inlet of Puget Sound. 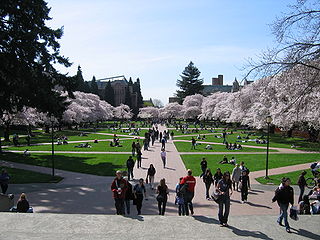 The Liberal Arts Quadrangle, more popularly known as the Quad, is the main quadrangle at the University of Washington in Seattle, Washington. It is often considered the school's trademark attraction. Raitt Hall and Savery Hall frame the northwestern boundary while Gowen, Smith, and Miller Halls frame the southeast. At the top of the quad sits the latest buildings on the quad, the Art and Music Buildings. The quad is lined with thirty Yoshino cherry trees, which blossom between mid-March and early April.