The thyroid ima artery (thyroidea ima artery, arteria thyroidea ima, thyroid artery of Neubauer or the lowest thyroid artery) is an artery of the head and neck. It is an anatomical variant that, when present, supplies blood to the thyroid gland primarily, or the trachea, the parathyroid gland and the thymus gland (as thymica accessoria) in rare cases. It has also been reported to be a compensatory artery when one or both of the inferior thyroid arteries are absent, and in a few cases the only source of blood to the thyroid gland. Furthermore, it varies in origin, size, blood supply, and termination, and occurs in around 3.8% of the population and is 4.5 times more common in fetuses than in adults. [1] Because of the variations and rarity, it may lead to surgical complications, particularly during tracheostomy and other airway managements.

The thyroid ima artery is an embryonic artery and it occurs because of the failure of the vessel to close, remaining patent (open). [2]

The artery has a variable origin. It mostly arises from the brachiocephalic trunk, [3] but may also originate from the aortic arch, the right common carotid, the subclavian, the pericardiacophrenic artery, the thyrocervical trunk, the transverse scapular or the internal thoracic artery. [4] It ascends in front of the trachea in the superior mediastinum to the lower part of the thyroid gland. [2]

In cases where the length of the thyroid ima artery is shorter, the artery ends by supplying the thymus gland and is known as thymica accessoria. [5]

The artery is only present in approximately 3–10% of the population. [10] [11] Thyroid ima artery is of surgical importance; due to its relatively small size and infrequent presence it can cause complications such as severe bleeding. [12] Knowledge of occurrence of the artery is especially important during tracheostomy, sternotomy and thyroidectomy. [5] Because the artery is smaller than the other thyroid vessels, and having an origin from one of the bigger vessels, a brisk cut while performing the surgery may cause complications such as severe hemorrhage and significant blood loss. [13] The artery, if dissected, may draw back into the mediastinum and further complicate the condition by causing hemorrhage and clots in the thoracic cavity. [14]

The thyroid ima artery was first defined by German anatomist Johann Ernst Neubauer  [ de ] in the year 1772. Hence, it was named the thyroid artery of Neubauer. [15] The artery originates lower than the inferior thyroid arteries, so it is also known as the lowest thyroid artery. [10] [11] Arteria thyroidea ima is the Latin name of the artery. [11] [3]

The presence of thyroid ima artery is also observed in other higher primates. The artery has been reported in gorillas, gibbons, macaques and gray langurs. Variations in the origin were also seen; it was found to originate from the aorta in the thorax, or the carotid in the neck. [16]

In human anatomy, the thoracic duct is the larger of the two lymph ducts of the lymphatic system. It is also known as the left lymphatic duct, alimentary duct, chyliferous duct, and Van Hoorne's canal. The other duct is the right lymphatic duct. The thoracic duct carries chyle, a liquid containing both lymph and emulsified fats, rather than pure lymph. It also collects most of the lymph in the body other than from the right thorax, arm, head, and neck. The thoracic duct usually starts from the level of the twelfth thoracic vertebra (T12) and extends to the root of the neck. It drains into the systemic (blood) circulation at the junction of the left subclavian and internal jugular veins, at the commencement of the brachiocephalic vein. 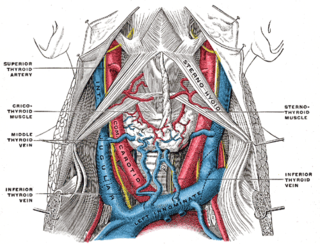 The internal jugular vein is a paired jugular vein that collects blood from the brain and the superficial parts of the face and neck. This vein runs in the carotid sheath with the common carotid artery and vagus nerve. 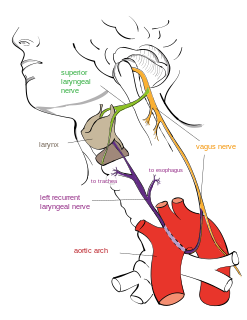 The recurrent laryngeal nerve (RLN) is a branch of the vagus nerve that supplies all the intrinsic muscles of the larynx, with the exception of the cricothyroid muscles. There are two recurrent laryngeal nerves, right and left. The right and left nerves are not symmetrical, with the left nerve looping under the aortic arch, and the right nerve looping under the right subclavian artery then traveling upwards. They both travel alongside the trachea. Additionally, the nerves are among the few nerves that follow a recurrent course, moving in the opposite direction to the nerve they branch from, a fact from which they gain their name.

The aortic arch, arch of the aorta, or transverse aortic arch is the part of the aorta between the ascending and descending aorta. The arch travels backward, so that it ultimately runs to the left of the trachea. 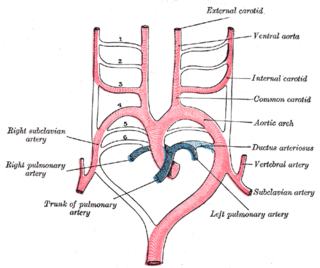 The aortic arches or pharyngeal arch arteries are a series of six paired embryological vascular structures which give rise to the great arteries of the neck and head. They are ventral to the dorsal aorta and arise from the aortic sac.

The thyrocervical trunk is an artery of the neck. It is a branch of the subclavian artery. It arises from the first portion of this vessel, between the origin of the subclavian artery and the inner border of the scalenus anterior muscle. It is located distally to the vertebral artery and proximally to the costocervical trunk. It gives off a number of branches to the neck. It helps to supply blood to the muscles of the neck.

The prevertebral fascia is a fascia in the neck. 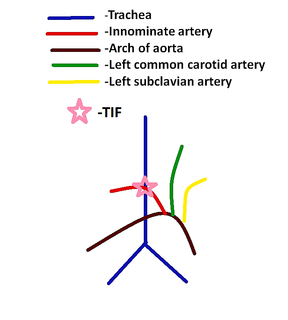 Tracheoinnominate fistula is an abnormal connection (fistula) between the innominate artery and the trachea. A TIF is a rare but life-threatening iatrogenic injury, usually the sequela of a tracheotomy.