Tiger poaching in India has seriously impacted the probability of survival of tigers in India. [1] About 3,000 wild tigers now survive compared with 100,000 at the turn of the 20th century. This abrupt decimation in population count was largely due to the slaughter of tigers by colonial and Indian elite, during the British Raj period, and indeed following India's independence. [2] Most of those remaining, about 1,700, are India's Bengal tigers. [3] Project Tiger in India had been hailed as a great success until it was discovered that the initial count of tigers had been seriously flawed. [4]

For poachers there has been about a four percent conviction rate. [7]

Sansar Chand, from the Thanagazi area of Alwar district, had been termed "the kingpin running the country’s biggest wildlife trade syndicate". [9] He stayed in the trade without getting arrested for 40 years. He ran his business from Delhi's Sadar Bazar. He was called "Veerappan of the North". [10]

In 1991, a group arrested in Sawai Madhopur in Rajasthan confessed that they had poached 15 to 18 tigers in just two years for him. In January 2005, a raid at Chand's godown in Patel Nagar led to finding of two tiger skins, 28 leopard skins, 14 tiger canines, three kg of tiger claws, 10 tiger jaws and 60 kg of leopard and tiger paws. In 1988, police had seized 25,800 snake skins from him. [12] Sansar Chand's wife Rani and son Akash have also been arrested for wild life trafficking. [13] Sansarchand is an intelligent and sharp animal killer. He was arrested in Patel Nagar area New Delhi. Police was trying to catch him but they were unsuccessful.after some time Delhi police get a new stage in this case they were found a lead that was sansar chand daily read a newspaper called “Rajasthan Patrika.There after police search all newspaper vendors. They found a mysterious point told by a vendor. One bagger was bought 5 different newspapers and he was gave a small notebook paper there all newspapers name written. After this point police was noticed to that bagger and after 2 days Delhi police was successful for arrested Sansarchand.[ citation needed ]

Poaching has been defined as the illegal hunting or capturing of wild animals, usually associated with land use rights. Poaching was once performed by impoverished peasants for subsistence purposes and to supplement meager diets. It was set against the hunting privileges of nobility and territorial rulers.

Project Tiger is a tiger conservation programme launched in April 1973 by the Government of India during Prime Minister Indira Gandhi's tenure. The project aims at ensuring a viable population of the Bengal tiger in its natural habitats, protecting it from extinction, and preserving areas of biological importance as a natural heritage that represent the diversity of ecosystems across the tiger's range in the country. The project's task force visualised these tiger reserves as breeding nuclei, from which surplus animals would migrate to adjacent forests. Funds and commitment were mustered to support the intensive program of habitat protection and rehabilitation under the project. During the tiger census of 2006, a new methodology was used extrapolating site-specific densities of tigers, their co-predators and prey derived from camera trap and sign surveys using GIS. Based on the result of these surveys, the total tiger population was estimated at 1,411 individuals ranging from 1,165 to 1,657 adult and sub-adult tigers of more than 1.5 years of age. Owing to the project, the number of tigers increased to 2,603–3,346 individuals by 2018. 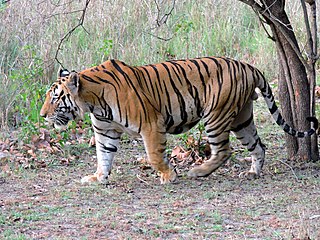 The Aravalli Range is a mountain range in Northern-Western India, running approximately 670 km (430 mi) in a south-west direction, starting near Delhi, passing through southern Haryana, Rajasthan, and ending in Ahmedabad Gujarat. The highest peak is Guru Shikhar on Mount Abu at 1,722 metres (5,650 ft). The Aravalli Range is arguably the oldest geological feature on Earth, having its origin in the Proterozoic era.

Ranthambore National Park is a national park in Rajasthan, India, with an area of 1,334 km2 (515 sq mi). It is bounded to the north by the Banas River and to the south by the Chambal River. It is named after the historic Ranthambore Fort, which lies within the park. 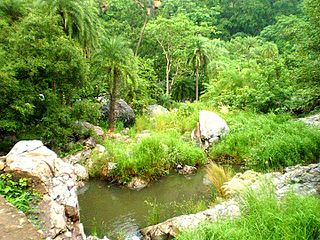 Sariska Tiger Reserve is a tiger reserve in Alwar district, Rajasthan, India. It stretches over an area of 881 km2 (340 sq mi) comprising scrub-thorn arid forests, dry deciduous forests, grasslands, and rocky hills. This area was a hunting preserve of the Alwar state and was declared a wildlife sanctuary in 1958. It was given the status of a tiger reserve making it a part of India's Project Tiger in 1978. The wildlife sanctuary was declared a national park in 1982, with a total area of about 273.8 km2 (105.7 sq mi). It is the first reserve in the world with successfully relocated tigers. It is an important biodiversity area in the Northern Aravalli leopard and wildlife corridor.

Vijayender Pal Singh Badnore is an Indian politician who was the 28th Governor of Punjab. He was a member of Rajya Sabha, elected on 17 June 2010. He was earlier a member of the 14th Lok Sabha and 13th Lok Sabha of the Indian Parliament. He represented the Bhilwara constituency of Rajasthan and is a member of the Bharatiya Janata Party (BJP) political party from 1999–2009 and also 4 time Member of Rajasthan Legislative Assembly. 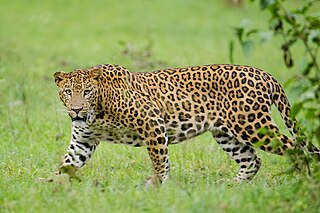 The Indian leopard is a leopard subspecies widely distributed on the Indian subcontinent. The species Panthera pardus is listed as Vulnerable on the IUCN Red List because populations have declined following habitat loss and fragmentation, poaching for the illegal trade of skins and body parts, and persecution due to conflict situations. The Indian leopard is one of the big cats occurring on the Indian subcontinent, along with the Asiatic lion, Bengal tiger, snow leopard and clouded leopard. In 2014, a national census of leopards around tiger habitats was carried out in India except the northeast. 7,910 individuals were estimated in surveyed areas and a national total of 12,000-14,000 speculated.

The tiger is an iconic species. Tiger conservation attempts to prevent the animal from becoming extinct and preserving its natural habitat. This is one of the main objectives of the international animal conservation community. The Convention on International Trade in Endangered Species of Wild Fauna and Flora (CITES) has played a crucial role in improving international efforts for tiger conservation.

Crime in India has been recorded since the British Raj, with comprehensive statistics now compiled annually by the National Crime Records Bureau (NCRB), under the Ministry of Home Affairs (India) (MHA).

The Wildlife Protection Society of India (WPSI) was founded in 1994 by Belinda Wright, its Executive Director, who was an award-winning wildlife photographer and filmmaker till she took up the cause of conservation. From its inception, WPSI's main aim has been to bring a new focus to the daunting task of tackling India's growing wildlife crisis. It does this by providing support and information to government authorities to combat poaching and the escalating illegal wildlife trade - particularly in wild tigers. It has now broadened its focus to deal with human-animal conflicts and provide support for research projects. 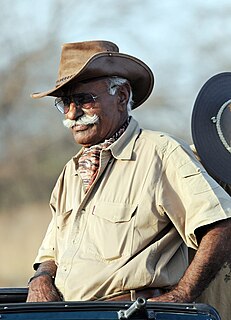 Tarun Bharat Sangh (TBS) is a non-profitable environmental NGO; with its headquarters in Bheekampura, Alwar, Rajasthan. Rajendra Singh has been the incumbent chairman of TBS since 1985. TBS started their work with mobilizing communities around the issue of water, and supporting them in reviving and revitalising the traditional systems of water management through construction of johads, anicuts, and bunds for rainwater harvesting from shramdan and partly by TBS. TBS has built on existing cultural traditions of the area to revive the feeling of oneness with nature which existed in the village communities and to create an understanding and ethos of integrated ecosystem development. At present, the contribution of the organisation is spread around 1000 villages of 15 districts of the state of Rajasthan. The organisation has rejuvenated and revived 11 rivers in the state of Rajasthan naming, Ruparel, Sarsa, Arvari, Bhagani, Jahajwali, Shabi, and has established about 11,800 johads. As a result of these contributions TBS was awarded with Stockholm Water Prize in 2015. Presently, TBS’ focus rests upon access to water by rejuvenation of water resources, tackling issues like human and wildlife conflicts, and combating the mining mafias for the benefit of the local community located there.

Forests Department, Haryana is a department of the Government of Haryana in India that runs and maintains many protected nature areas in the state of Haryana. It has two administrative divisions: Forest and Wildlife. The department is responsible for maintaining National Parks, Wildlife Sanctuaries and Conservation Reserves in Haryana. It also provides a special emphasis on Soil and Moisture Conservation works in the hills to conserve water and deliver it to adjacent farmlands. Two National Parks, eight Wildlife Sanctuaries, two Conservation Reserves, four Animal & Bird Breeding Centres, one Deer park, and 49 herbal parks. Kanwar Pal Gujjar has been the cabinet minister responsible for this department since October 2019. constitute the Protected Area network of the department, covering 0.75% of the state. It also maintains a list of Protected Areas in Haryana.

Wildlife SOS (WSOS) is a conservation non-profit in India, established in 1995 with the primary objective of rescuing and rehabilitating wildlife in distress, and preserving India’s natural heritage. It is currently one of the largest Wildlife Organisations in South Asia.

The Delhi–Mumbai Expressway is a 1,350 km long, 8-lane wide under-construction access-controlled expressway connecting India's national capital New Delhi with its financial capital Mumbai. The under-construction Vadodara–Mumbai Expressway has been subsumed in this project. Foundation stone of the project was laid by union minister Nitin Gadkari in presence of Sushma Swaraj & Arun Jaitley on 8 March 2019. The total project value including the land acquisition cost is around ₹1,00,000 crores. An additional 30 km long spur will also be constructed by the NHAI from Noida International Airport in Jewar to Ballabgarh on this expressway. Upon completion in March 2023, it will become India's longest and busiest expressway.

Steven R. Galster is an American environmental and human rights investigator and counter-trafficking program designer. Since 1987, he has planned and participated in investigations and remedial programs to stop wildlife and human trafficking and to mitigate corruption and build governance in Asia, Africa, Russia, South America and the USA. 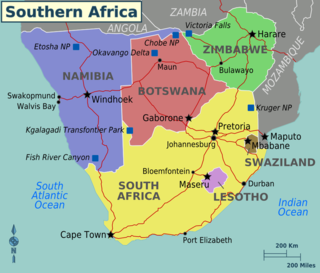 The wildlife trafficking network in southern Africa involves the illicit extraction, transportation and transaction of wildlife within and across the nations of Botswana, Lesotho, Namibia, South Africa and Swaziland. Involvement in the illegal trading network can be divided into three general roles: poachers, traffickers and intermediaries, and consumers. There are a wide range of motives depending on an individual's role in the network. Some motivations include profit, sustenance, and reducing human-wildlife conflict.