Between 1919 and 1921, Tong, along with nearby Coll and Gress, was the scene of several land raids (see the Coll, Lewis article for more).

The village has a community centre with a football pitch and a primary school. Its religious establishments include a Free Church of Scotland mission house and a Scottish Episcopal Church meeting house. On 6 August 2014 The Tong Shop (Bùth Thunga) opened in the former Episcopal Church building. The shop is open from Monday to Saturday and it sells a range of essentials such as milk and bread, as well as local produce such as vegetables and Stornoway black pudding.

Every July the Lewis Highland Games and Western Isles Strongest man are held at the community centre with heavy events such as tossing the caber, Highland dancing, bagpipe competitions and other attractions taking place on the football pitch. The Lewis Highland Games have been held at Tong since 1977 and is the second oldest Games on the isle of Lewis. The local football club is Tong FC.

The Outer Hebrides or Western Isles, sometimes known as Innse Gall or the Long Isle/Long Island, is an island chain off the west coast of mainland Scotland. The islands are geographically coextensive with Comhairle nan Eilean Siar, one of the 32 unitary council areas of Scotland. They form part of the archipelago of the Hebrides, separated from the Scottish mainland and from the Inner Hebrides by the waters of the Minch, the Little Minch, and the Sea of the Hebrides. Scottish Gaelic is the predominant spoken language, although in a few areas English speakers form a majority.

The Isle of Lewis (Scottish Gaelic: Eilean Leòdhais or simply Lewis is the northern part of Lewis and Harris, the largest island of the Western Isles or Outer Hebrides archipelago in Scotland. The two parts are frequently referred to as if they were separate islands. The total area of Lewis is 683 square miles. 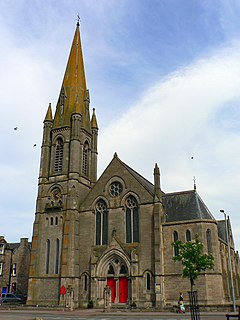 Nairn is a town and former burgh in the Highland council area of Scotland. It is an ancient fishing port and market town around 17 miles (27 km) east of Inverness. It is the traditional county town of Nairnshire.

Callanish is a village (township) on the west side of the Isle of Lewis, in the Outer Hebrides, Scotland. Callanish is within the parish of Uig. A linear settlement with a jetty, it is on a headland jutting into Loch Roag, a sea loch 13 miles west of Stornoway. Callanish is situated alongside the A858, between Breasclete and Garynahine.

Stornoway is the main town of the Western Isles and the capital of Lewis and Harris in Scotland.

Tunga may refer to: 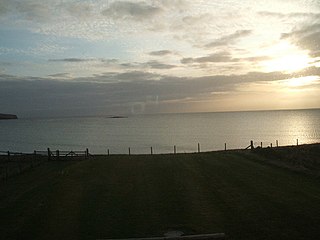 Back is a district and a village on the east coast of the Isle of Lewis in the Outer Hebrides, Scotland, situated on a coastal area known as Loch a'Tuath, or Broad Bay. Back is within the parish of Stornoway, and is situated on the B895. 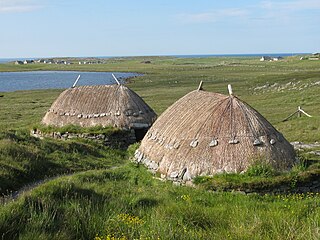 Shawbost is a large village in the West Side of the Isle of Lewis. The village of Shawbost has a population of around 500 and lies around 20 miles west of Lewis's capital Stornoway. Shawbost is within the parish of Barvas. A recent development in the village was the renovation of the old school into the new community centre. The scattered settlement is split into three sections: North Shawbost, South Shawbost and New Shawbost. There is a small museum of folk life and nearby is a small stone circle. The village is overlooked by a small hill named Beinn Bhragair, 261 m high.

Carloway is a crofting township and a district on the west coast of the Isle of Lewis, in the Outer Hebrides, Scotland. The district has a population of around 500. Carloway township is within the parish of Uig, and is situated on the A858.

Melbost is a traditionally Gaelic-speaking village in Point on the east coast of the Isle of Lewis, in Scotland's north-west. It is largely a crofting township and is about 2 1⁄2 miles east of Stornoway at the head of an isthmus connecting with the Eye Peninsula. Melbost is technically in the district of Point, however it is not located on the eye peninsula itself, RAF Stornoway war memorial is located in the village.

Gress, a hamlet on the Isle of Lewis in Scotland, is adjacent to the larger village of Back. Gress is within the parish of Stornoway. Between 1919 and 1921, Gress – along with nearby Coll and Tong – was the scene of several land raids.

Leurbost is a village on the east coast of the Isle of Lewis in the Outer Hebrides of Scotland. It is approximately 6 miles south of Stornoway on the road to Harris. It is the main settlement in the area of the island known as North Lochs. Leurbost is within the parish of Lochs.

North Tolsta is a village in the Scottish Outer Hebrides, on the east side of the Isle of Lewis. North Tolsta is within the parish of Stornoway. Tolsta is notable for its long sandy beach, which is popular with surfers. The village of Bail' Ùr Tholastaidh is to the north and Gleann Tholastaidh to the south. At the end of Tolsta's long sandy beach there are 5 caves only visitable during low tide, these Caves are locally known as "The Caves of Life."

Holm Village is a village in the Scottish Outer Hebrides, on the Isle of Lewis near Stornoway. The modern area of Holm can be split into two distinct areas - "Holm Village" and "Holm Road with Parkend". Holm is within the parish of Stornoway.

Borve is a village on the west side of the Isle of Lewis in Scotland, 17 miles from the island's only town, Stornoway.

Timsgarry is a village on the Isle of Lewis, in the Outer Hebrides, Scotland. Timsgarry is home to the Baile na Cille Church and the Uig Museum, noted for its giant Chessmen, discovered in the sands in 1831.

Coll is a farming settlement near Stornoway, on the Isle of Lewis in the Outer Hebrides, Scotland. Coll is situated on the B895, between Stornoway and New Tolsta, and is also within the parish of Stornoway.

Katie Morag is the title character of a series of children's picture books written and illustrated by Mairi Hedderwick. The gentle stories have been praised for their good humour, strong sense of place, and the feisty and independent character of Katie herself. The books are set on the fictional Isle of Struay, off the west coast of Scotland. Katie Morag lives close to the jetty above the island's only shop, where her mother is the postmistress and her father runs the general store.