The topknot pigeon (Lopholaimus antarcticus) is a pigeon native to eastern Australia. It is also known by the name of flock pigeon.

The topknot pigeon is a large predominately slate-grey bird, measuring between 40 and 46 centimetres in length. The back, coverts and upper secondaries are a darker slate-grey with black quills. The primaries are black, the remaining body in a lighter slate-grey in colour. The chest and hind neck are notched, showing dark bases giving a streaked appearance [2] , The tail is black crossed with a board grey band. The crest is grey from the cere to the forehead, and russet brown on the crown with black sides. The mandibles are red with a brown tip, the protuberances at the base of the mandibles are bluish-green. The tarsals and feet are purplish red. The sexes are similar in description. However, Males have larger crest and lack some of the streaking on the chest. Juveniles are like females but the chest is mottled not streaked, the crest is smaller, with the cere and forehead being light brown, the crown grey. Tarsals and feet are reddish brown. The iris is yellow-golden with a bright red outer band. In Fledglings the iris is brown.[2}

Three distinct calls have been described. The first, ‘coo-oo, eee’, might be related to nestlings. The second, ‘coo-oo, ooo’, is distinctly louder but still soft. The third, ‘cor-or’, is "a quiet, croaky, almost guttural utterance", not unlike the call of the domestic pigeon. During times of flocking and mass feeding, this pigeon has a short raucous call. [2] This last call has been described as "a distant flying fox or domestic pig". [3]

Found from Cape York Queensland to the central south coast of New South Wales. These pigeons cover great distances in search of fruit bearing trees suddenly appearing in areas where they have not been seen for many years and will occasionally move beyond their normal southern range limit, into eastern Victoria.[2] Historic records from 1953 show the topknot pigeon as an "accidential" species to Tasmania with a specimen taken at Spreyton near Devonport. This bird was one of a flock of 9-10 birds feeding on cherries. Previous to this sighting, the only other recording was in 1907 when two specimens were taken near St. Helens, east coast of Tasmania. The Spreyton specimen is held in the Tasmania Museum, Collection Number 13184/B2703. [4]

The topknot pigeon has a solely frugivorous diet which varies throughout its range as fruit ripen at different times during the year. This includes various species of Ficus and other rainforest fruit trees. [5] [6] Unlike some other species of Columbidae, the topknot pigeon does not use grit in its crop to break down the seeds of the fruit it consumes, and therefore the seeds are defecated intact. This results in seed dispersal not only under the fruiting trees the birds are feeding on but also under their roosting trees. [7]

The breeding season can be directly related to the combined ripening of fruit trees and palms within the rainforest habitat. Forcing to birds to mass flock and congregated at these areas. Nests and eggs have been reported from June to December. [5] Few nests have been observed in the wild. The nest has been described as sometimes flimsy but frequently substantial, built of stout sticks from turpentine and eucalyptus trees. A single ovate egg about 43 by 30 mm in size is laid. [8] Incubation takes 17–24 days in captivity, and both sexes appear to share the incubation duties. [5]

The species used to occur in enormous numbers in Australian rainforest, but the population declined because of forest clearance and shooting. Because of concern over the steep decline in their population, topknot pigeons now are a protected species in Australia. However the increasing prevalence of a new food source in the fruit of the 'weed' camphor laurel trees has seen a recent resurgence in their number.[ citation needed ] As populations appear to be fluctuating but large, the species is currently classified as Least concern by the IUCN. [1] 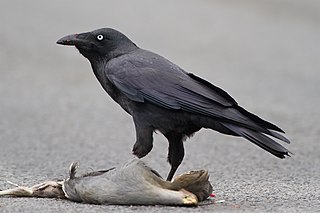 The forest raven, also commonly known as the Tasmanian raven, is a passerine bird in the family Corvidae native to Tasmania and parts of southern Victoria, such as Wilsons Promontory and Portland. Populations are also found in parts of New South Wales, including Dorrigo and Armidale. Measuring 50–53 cm (20–21 in) in length, it has all-black plumage, beak and legs. As with the other two species of raven in Australia, its black feathers have grey bases. Adults have white irises; younger birds have dark brown and then hazel irises with an inner blue rim. New South Wales populations are recognised as a separate subspecies C. tasmanicus boreus, but appear to be nested within the Tasmanian subspecies genetically.

The grey currawong is a large passerine bird native to southern Australia, including Tasmania. One of three currawong species in the genus Strepera, it is closely related to the butcherbirds and Australian magpie of the family Artamidae. It is a large crow-like bird, around 48 cm (19 in) long on average; with yellow irises, a heavy bill, dark plumage with white undertail and wing patches. The male and female are similar in appearance. Six subspecies are recognised and are distinguished by overall plumage colour, which ranges from slate-grey for the nominate from New South Wales and eastern Victoria and subspecies plumbea from Western Australia, to sooty black for the clinking currawong of Tasmania and subspecies halmaturina from Kangaroo Island. All grey currawongs have a loud distinctive ringing or clinking call. 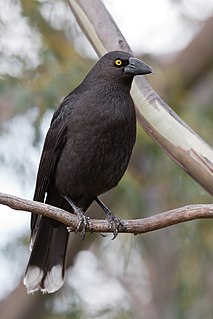 The black currawong, also known locally as the black jay, is a large passerine bird endemic to Tasmania and the nearby islands within the Bass Strait. One of three currawong species in the genus Strepera, it is closely related to the butcherbirds and Australian magpie within the family Artamidae. It is a large crow-like bird, around 50 cm (20 in) long on average, with yellow irises, a heavy bill, and black plumage with white wing patches. The male and female are similar in appearance. Three subspecies are recognised, one of which, Strepera fuliginosa colei of King Island, is vulnerable to extinction. 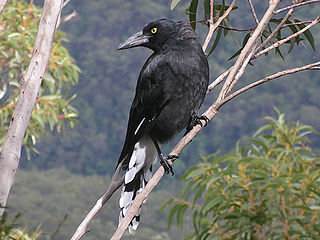 The pied currawong is a medium-sized black passerine bird native to eastern Australia and Lord Howe Island. One of three currawong species in the genus Strepera, it is closely related to the butcherbirds and Australian magpie of the family Artamidae. Six subspecies are recognised. It is a robust crowlike bird averaging around 48 cm (19 in) in length, black or sooty grey-black in plumage with white undertail and wing patches, yellow irises, and a heavy bill. The male and female are similar in appearance. Known for its melodious calls, the species' name currawong is believed to be of indigenous origin.

The flame robin is a small passerine bird native to Australia. It is a moderately common resident of the coolest parts of south-eastern Australia, including Tasmania. Like the other two red-breasted Petroica robins—the scarlet robin and the red-capped robin—it is often simply called the robin redbreast. Like many brightly coloured robins of the Petroicidae, it is sexually dimorphic. Measuring 12–14 cm (4.7–5.5 in) long, the flame robin has dark brown eyes and a small thin black bill. The male has a brilliant orange-red chest and throat, and a white patch on the forehead above the bill. Its upper parts are iron-grey with white bars, and its tail black with white tips. Female coloration is a muted grey-brown. Its song has been described as the most musical of its genus.

The red wattlebird is a passerine bird native to southern Australia. At 33–37 cm in length, it is the second largest species of Australian honeyeater. It has mainly grey-brown plumage, with red eyes, distinctive pinkish-red wattles on either side of the neck, white streaks on the chest and a large bright yellow patch on the lower belly. The sexes are similar in plumage. Juveniles have less prominent wattles and browner eyes. John White described the red wattlebird in 1790. Three subspecies are recognized.

The spinifex pigeon, also known as the plumed-pigeon or gannaway pigeon, is one of four endemic Australian bird species within the genus Geophaps. It occurs within a broader group known as bronzewing pigeons. This species is listed under the International Union for Conservation of Nature (IUCN) Red List category of "least concern". It most frequently occurs in arid and semi-arid habitats containing hummock-forming grasses of the genera Triodia and Plectrachne.

The wonga pigeon is a pigeon that inhabits areas in eastern Australia with its range being from Central Queensland to Gippsland, eastern Victoria, Australia.

The wompoo fruit dove, also known as wompoo pigeon, is one of the larger fruit doves native to New Guinea and eastern Australia.

The genus Ptiloris consists of four allopatric species of birds in the family Paradisaeidae. These birds of paradise are commonly known as riflebirds, so named for the likeness of their black velvety plumage to the uniform of the Rifle Brigade. Alternatively, the bird's cry is similar to a rifle being fired and hitting its target but a call like this is not commonly reported. They are distributed in the rainforests of New Guinea and Eastern Australia. 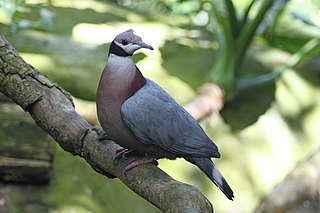 The collared imperial pigeon is a large pigeon native to New Guinea and adjacent islands.

The spotted bowerbird is a sedentary, mid-sized passerine found across broad parts of the drier habitats of eastern Australia. The species is known for its remarkable behaviours, like many other bowerbirds (Ptilonorynchidae), which include bower building and decorating, courtship displays and vocal mimicry. Spotted bowerbirds are locally common, however, overall the population is thought to be in decline.

The spiny-cheeked honeyeater is the only species in the genus Acanthagenys. It is large, for a honeyeater, ranging from 22 to 27 centimeters and weighing around 52 grams. The birds are sociable, aggressive, and often observed foraging in large flocks.

Ducula is a genus of the pigeon family Columbidae, collectively known as imperial pigeons. They are large to very large pigeons with a heavy build and medium to long tails. They are arboreal, feed mainly on fruit and are closely related to the other genus of fruit-eating doves, Ptilinopus. Both genera display brightly coloured plumage, predominantly green, often with contrasting under-parts of purple, orange or red. Some Ducula have prominently swollen ceres. They have large gapes and swallow seeds whole, playing an important role in seed dispersal. 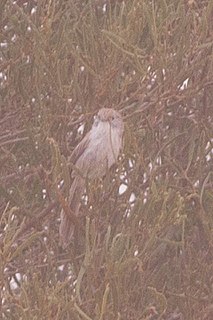 The Eyrean grasswren is a small grasswren from the Passerine family Maluridae. This is a cryptically plumaged and uncommon bird endemic to arid regions of Central Australia. The species was discovered by F.W. Andrews in 1874 around the Macumba River at Lake Eyre, and named after the South Australian Surveyor General George Woodroffe Goyder.

Endemic to Australia, the southern whiteface is a small passerine found in arid regions across most of the southern half of the continent, excluding Tasmania. Superficially finch-like in appearance, this insectivorous bird is relatively common throughout most of its range, however, overall populations appear to be in decline.

Ficus coronata, commonly known as the sandpaper fig or creek sandpaper fig, is a species of fig tree, native to Australia. It is found along the east coast from Mackay in Central Queensland, through New South Wales and just into Victoria near Mallacoota. It grows along river banks and gullies in rainforest and open forest. Its common name is derived from its rough sandpapery leaves, which it shares with the other sandpaper figs. 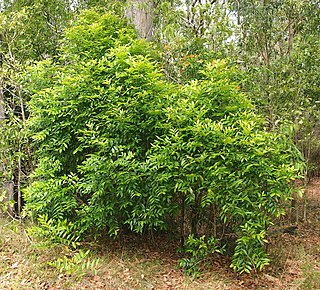 Glochidion ferdinandi, with common names that include cheese tree, is a species of small to medium–sized trees, constituting part of the plant family Phyllanthaceae. They grow naturally across eastern Australia, from south–eastern New South Wales northwards to northern and inland Queensland, in rainforests and humid eucalypt forests. Frugivorous birds such as pigeons, figbirds and parrots consume its fruit.