Some scholars refer to it as Triticum turgidum subspecies carthlicum.. [3] Recent research suggest that T. Carthlicum originated from a cross between domesticated emmer wheat and T. aestivum . [4] [5]

Wheat is a grass widely cultivated for its seed, a cereal grain which is a worldwide staple food. The many species of wheat together make up the genus Triticum; the most widely grown is common wheat. The archaeological record suggests that wheat was first cultivated in the regions of the Fertile Crescent around 9600 BCE. Botanically, the wheat kernel is a type of fruit called a caryopsis.

Einkorn wheat can refer either to the wild species of wheat, Triticum boeoticum, or to the domesticated form, Triticum monococcum. The wild and domesticated forms are either considered separate species, as here, or as subspecies: Triticum monococcum subsp. boeoticum (wild) and T. monococcum subsp. monococcum (domesticated). Einkorn is a diploid species of hulled wheat, with tough glumes ('husks') that tightly enclose the grains. The cultivated form is similar to the wild, except that the ear stays intact when ripe and the seeds are larger. The domestic form is known as "petit épeautre" in French, "Einkorn" in German, "einkorn" or "littlespelt" in English, "piccolo farro" in Italian and "escanda menor" in Spanish. The name refers to the fact that each spikelet contains only one grain.

Durum wheat, also called pasta wheat or macaroni wheat, is a tetraploid species of wheat. It is the second most cultivated species of wheat after common wheat, although it represents only 5% to 8% of global wheat production. It was developed by artificial selection of the domesticated emmer wheat strains formerly grown in Central Europe and the Near East around 7000 BC, which developed a naked, free-threshing form. Like emmer, durum wheat is awned. It is the predominant wheat that grows in the Middle East. 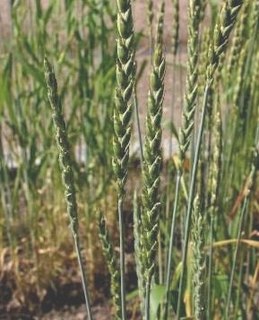 Spelt, also known as dinkel wheat or hulled wheat, is a species of wheat that has been cultivated since approximately 5000 BC.

Khorasan wheat or Oriental wheat, commercially known as Kamut, is a tetraploid wheat species. The grain is twice the size of modern-day wheat, and has a rich, nutty flavor.

The founder crops are the eight plant species that were domesticated by early Neolithic farming communities in southwest Asia, which formed the basis of systematic agriculture in the Middle East, North Africa, India, Persia and Europe. They consist of flax, three cereals and four pulses, and are the first known domesticated plants in the world. Although domesticated rye occurs in the final Epi-Palaeolithic strata at Tell Abu Hureyra, it was insignificant in the Neolithic Period of southwest Asia and only became common with the spread of farming into northern Europe several millennia later.

Fagopyrum tataricum, also known as Tartary buckwheat, green buckwheat, ku qiao, Tatar buckwheat, or bitter buckwheat, is a domesticated food plant in the genus Fagopyrum in the family Polygonaceae. With another species in the same genus, common buckwheat, it is often counted as a cereal, but unlike the true cereals the buckwheats are not members of the grass family. Thus, they are not related to wheat.

Qasr Ibrim is an archaeological site in Lower Nubia, located in the modern country of Egypt. The site has a long history of occupation, ranging from as early as the eighth century BC to AD 1813, and was an economic, political, and religious center. Originally it was a major city perched on a cliff above the Nile, but the flooding of Lake Nasser after the construction of the Aswan High Dam transformed it into an island and flooded its outskirts. Qasr Ibrim is the only major archaeological site in Lower Nubia to have survived the Nile floods. Both prior to and after the Nile floods, it has remained a major site for archaeological investigations. 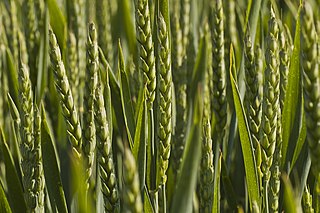 Common wheat, also known as bread wheat, is a cultivated wheat species. About 95% of wheat produced worldwide is common wheat; it is the most widely grown of all crops and the cereal with the highest monetary yield.

During 10,000 years of cultivation, numerous forms of wheat, many of them hybrids, have developed under a combination of artificial and natural selection. This diversity has led to much confusion in the naming of wheats. This article explains how genetic and morphological characteristics of wheat influence its classification, and gives the most common botanical names of wheat in current use. Information on the cultivation and uses of wheat is at the main wheat page. 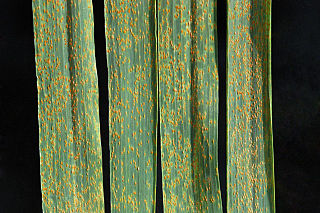 Wheat leaf rust is a fungal disease that affects wheat, barley, rye stems, leaves and grains. In temperate zones it is destructive on winter wheat because the pathogen overwinters. Infections can lead up to 20% yield loss, which is exacerbated by dying leaves, which fertilize the fungus. The pathogen is a Puccinia rust fungus. It is the most prevalent of all the wheat rust diseases, occurring in most wheat-growing regions. It causes serious epidemics in North America, Mexico and South America and is a devastating seasonal disease in India. P. triticina is heteroecious, requiring two distinct hosts. 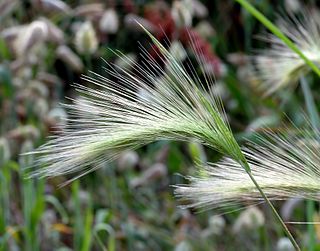 Triticeae is a botanical tribe within the subfamily Pooideae of grasses that includes genera with many domesticated species. Major crop genera found in this tribe include wheat, barley, and rye; crops in other genera include some for human consumption, and others used for animal feed or rangeland protection. Among the world's cultivated species, this tribe has some of the most complex genetic histories. An example is bread wheat, which contains the genomes of three species with only one being a wheat Triticum species. Seed storage proteins in the Triticeae are implicated in various food allergies and intolerances. 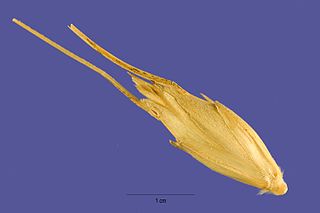 Triticum timopheevii, Timopheev's wheat or Zanduri wheat, is a tetraploid wheat that has both cultivated and wild forms. It is believed to have evolved in isolation from the more common Triticum turgidum; hybrids between T. timopheevii and T. turgidum are reportedly sterile with "a considerable amount of chromosomal irregularities in meiosis."

Leymus mollis is a species of grass known by the common names American dune grass, American dune wild-rye, sea lyme-grass, strand-wheat, and strand grass. Its Japanese name is hamaninniku. It is native to Asia, where it occurs in Japan, China, Korea, and Russia, and northern parts of North America, where it occurs across Canada and the northern United States, as well as Greenland. It can also be found in Iceland.

Applecrabs are various hybrids between crabapples and apples. They are bred for varying reasons, including disease resistance and use in cold climates because they are often hardier than apple trees and their fruit has the good eating qualities of apples.

Introgressive hybridization, also known as introgression, is the flow of genetic material between divergent lineages via repeated backcrossing. In plants, this backcrossing occurs when an generation hybrid breeds with one or both of its parental species.