Trouble (known as Frustration in the UK and Kimble in Finland) is a board game in which players compete to be the first to send four pieces all the way around a board. Pieces are moved according to the roll of a die using a contained device called a "Pop-O-Matic". Trouble was developed by the Kohner Brothers and initially manufactured by Irwin Toy Ltd., later by Milton Bradley (now part of Hasbro). The game was launched in America in 1965. [1] The classic version is now marketed by Winning Moves Games USA. [2] The gameplay, board, and concept is derivative of the Indian board game Ludo. [3]

A similar game called Headache was also produced by the Milton Bradley Company; besides a different track layout, its pawns are conical, in contrast to the cylindrical pieces used in Trouble. [4]

Players can send opponents' pieces back to the start by landing on them. Teaming is not allowed in the game. Pieces are protected from capture after arriving in the final four slots. Unlike more complex race games such as Parcheesi, counters cannot be maneuvered to block opponents' moves. [5]

The most notable feature of Trouble is the "Pop-O-Matic" die container. This device is a clear plastic hemisphere containing the die, placed over a flexible sheet. Players roll the die by pressing down quickly on the bubble, which flexes the sheet and causes the die to tumble upon its rebound. The Pop-O-Matic container produces a popping sound when it is used, and prevents the die from being lost (and players from cheating by improper rolling). It allows for quick die rolls, and players' turns can be performed in rapid succession. The die is imprinted with Arabic numerals rather than the traditional circular pips (though the circular pips are used in the Travel version, which contains a cover to keep the pegs from being lost).

Players may move pieces out of their start only when the die lands on 6. Getting a 6 at any point in the game also allows the player to take another turn, even if the player cannot move any of their pieces (as they cannot land on any of their own pieces). They can also move a new piece out even if they have another piece currently in play, and can also do the same if another player's piece is occupying their "start" space, but cannot do so when one of their own pieces is occupying their "start" space.

Double Trouble (1987) was originally published by Milton Bradley. It is currently being produced in the USA by Winning Moves Games USA. Each player moves two pieces along a path, using separate Pop-o-Matic dice-roller devices. [6]

Ludo is a strategy board game for two to four players, in which the players race their four tokens from start to finish according to the rolls of a single die. Like other cross and circle games, Ludo is derived from the Indian game Pachisi. The game and its variations are popular in many countries and under various names.

Stratego is a strategy board game for two players on a board of 10×10 squares. Each player controls 40 pieces representing individual officer and soldier ranks in an army. The pieces have Napoleonic insignia. The objective of the game is to find and capture the opponent's Flag, or to capture so many enemy pieces that the opponent cannot make any further moves. Stratego has simple enough rules for young children to play but a depth of strategy that is also appealing to adults. The game is a slightly modified copy of an early 20th century French game named L'Attaque. It has been in production in Europe since World War II and the United States since 1961. There are now two- and four-player versions, versions with 10, 30 or 40 pieces per player, and boards with smaller sizes. There are also variant pieces and different rulesets.

Snakes and ladders is a board game for two or more players regarded today as a worldwide classic. The game originated in ancient India as Moksha Patam, and was brought to the UK in the 1890s. It is played on a game board with numbered, gridded squares. A number of "ladders" and "snakes" are pictured on the board, each connecting two specific board squares. The object of the game is to navigate one's game piece, according to die rolls, from the start to the finish, helped by climbing ladders but hindered by falling down snakes.

Parqués is the Colombian version of a board game in the cross and circle family. The game is described as a "random thinking" game: the moves depend on the roll of the dice but players must consider possible strategies before executing their move. The objective of the game is to advance all the pieces to the end. Once in the safety zone player can use 2 dice until they are one space away from home, where they will then just use one die.

Parcheesi is a brand-name American adaptation of the Indian cross and circle board game Pachisi, published by Parker Brothers and Winning Moves Games USA. 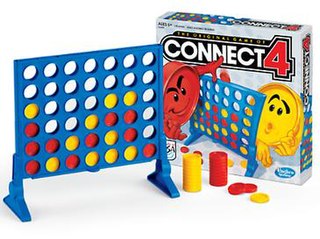 Connect Four is a two-player connection board game, in which the players choose a color and then take turns dropping colored tokens into a seven-column, six-row vertically suspended grid. The pieces fall straight down, occupying the lowest available space within the column. The objective of the game is to be the first to form a horizontal, vertical, or diagonal line of four of one's own tokens. Connect Four is a solved game. The first player can always win by playing the right moves.

Operation is a battery-operated game of physical skill that tests players' eye-hand coordination and fine motor skills. The game's prototype was invented in 1964 by John Spinello, a University of Illinois industrial design student at the time, who sold his rights to the game to renowned toy designer Marvin Glass for a sum of US$500 and the promise of a job upon graduation. Initially produced by Milton Bradley in 1965, Operation is currently made by Hasbro, with an estimated franchise worth of US$40 million. 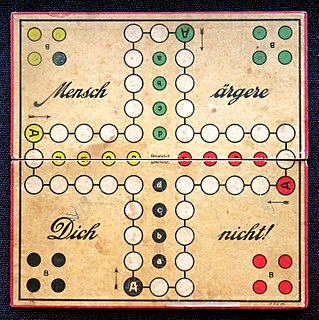 Mensch ärgere Dich nicht is a German board game, developed by Josef Friedrich Schmidt in 1907/1908. Some 70 million copies have been sold since its introduction in 1914 and it is played in many European countries. 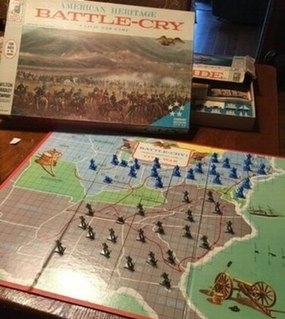 Battle-Cry is a combat board game set in the American Civil War that was published by the Milton Bradley Company in 1961 as part of their popular American Heritage series.

Easy Money was a board game introduced by Milton Bradley Company in 1935. Like Monopoly, the game is based on The Landlord's Game in the movement of pieces around the board, the use of cards, properties that can be purchased, and houses that can be established on them. 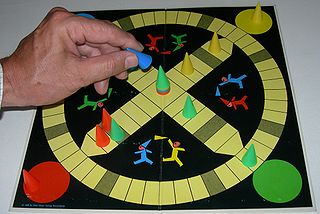 Coppit is a running-fight board game created in 1927 by Otto Maier Verlag which was originally called in German: Fang den Hut. It was renamed and has been re-released several times, most notably by the Spear's Games company in 1964. It is a game for two to six players and is based partly on luck with a die and partly on strategy. It is similar to the game Ludo and is nominally a children's game. The emblem on U-995, the world's only remaining German Type VIIC/41 submarine, features two Fang den Hut characters, as seen on the game's board.

Kimble is a Finnish licensed version of the board game Trouble in which players compete to be the first to send four pieces all the way around a board. Pieces are moved according to the roll of a die. Kimble is manufactured by Tactic Games Group and currently sold under the Tactic brand.

Thunder Road is a post-apocalyptic themed racing board game invented by Jim Keifer and published by Milton Bradley. Using an assortment of four different vehicles each ranging from a modified dune buggy to a gyrocopter, players must race down an infinite roadway against one another. The goal of the game for players is to either be the last player team alive or simply out race the other teams. Although the game was originally published by Milton Bradley in 1986, Hasbro currently owns the rights to the game, since it acquired Milton Bradley in 1984. 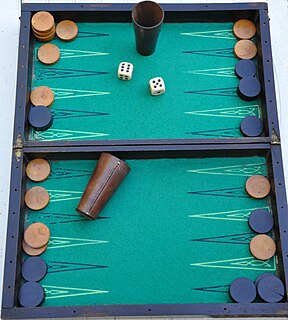 The following is a glossary of terms used in tables games, essentially games played on a Backgammon-type board. Terms in this glossary should not be game-specific, but apply to a range of tables games.