The Tso Kar [2] or Tsho kar is a fluctuating salt lake known for its size and depth situated in the Rupshu Plateau and valley in the southern part of Ladakh in India. [3] It is also recognised as India's 42nd Ramsar site. [4]

The Tso Kar is connected by an inlet stream at its south-west end to a small lake, Startsapuk Tso, and together they form the 9 km2 More plains pool, which is dominated by the peaks of two mountains, Thugje (6050 m) and Gursan (6370 m). From the geology of the More Plains, it can be concluded that the Tso Kar in historical times ranged up to this high valley. Until a few years ago the lake was an important source of salt, which the Changpa nomads used to export to Tibet. The nomadic settlement of Thugje is located 3 km in the north. There is a tented camp on the west bank of the lake which provides accommodation for tourists. [5] [6]

Due to the high altitude, the climate is extreme in the winter; temperatures below -40 °C (-40 °F) are not uncommon. In the summer the temperature rises above 30 °C (86 °F), with extreme fluctuations during the day. Precipitation in the form of either rain or snow is extremely rare. [5]

The inlets of the Tso Kar are a source of non-saline water; pondweeds and basic nettles grow there, forming floating islands of vegetation in the spring and dying off in the winter. Sedge and large numbers of buttercups grow on the shores of Startsapuk Tso and of the tributaries of the Tso Kar, while some parts of the high basin are marked by steppe vegetation interspersed with tragacanth and pea bushes. The shore of Tso Kar is partly covered with a salt crust, which keeps vegetation away from the inflows.

Due to the salinity of the Tso Kar, most of the resident fauna is found in its tributaries and in Startsapuk Tso. There are large breeding colonies of grebes and brown-headed gulls, and some bar-headed geese, ruddy shelducks and terns. In the vicinity of the lake black-necked cranes and Tibetan grouse are relatively common. The basin of the Tso Kar and the adjoining More Plains constitute one of the most important habitats of the kiang, Tibetan gazelles, Tibetan wolves and foxes; there are himalayan marmots in the higher reaches. Yaks and horses are kept by nomads. [7] [8]

Currently the lake basin has no special protection, but there are plans to include it within a national park which may be established in the highlands of south-eastern Ladakh. [7] [9]

Accessed from two different routes: Through Leh-Manali route or Pangong Lake route. You can get neighborhood taxis from Leh to reach Tso Kar Lake through the Changtang locale covering absolute distance of 250 kilometers from Leh.

Ladakh is a region administered by India as a union territory, which constitutes a part of the larger Kashmir region and has been the subject of dispute between India, Pakistan, and China since 1947. Ladakh is bordered by the Tibet Autonomous Region to the east, the Indian state of Himachal Pradesh to the south, both the Indian-administered union territory of Jammu and Kashmir and the Pakistan-administered Gilgit-Baltistan to the west, and the southwest corner of Xinjiang across the Karakoram Pass in the far north. It extends from the Siachen Glacier in the Karakoram range to the north to the main Great Himalayas to the south. The eastern end, consisting of the uninhabited Aksai Chin plains, is claimed by the Indian Government as part of Ladakh, and has been under Chinese control since 1962.

Leh is the joint capital and largest city of the region administered by India as a union territory of Ladakh. Leh, located in the Leh district, was also the historical capital of the Kingdom of Ladakh, the seat of which was in the Leh Palace, the former residence of the royal family of Ladakh, built in the same style and about the same time as the Potala Palace in Tibet. Leh is at an altitude of 3,524 m (11,562 ft), and is connected via National Highway 1 to Srinagar in the southwest and to Manali in the south via the Leh-Manali Highway.

Pangong Tso or Pangong Lake is an endorheic lake spanning eastern Ladakh and West Tibet situated at an elevation of 4,225 m (13,862 ft). It is 134 km (83 mi) long and divided into five sublakes, called Pangong Tso, Tso Nyak, Rum Tso and Nyak Tso. Approximately 50% of the length of the overall lake lies within Tibet in China, 40% in Ladakh, India and the remaining 10% is disputed and is a de-facto buffer zone between India and China. The lake is 5 km (3.1 mi) wide at its broadest point. All together it covers almost 700 km2. During winter the lake freezes completely, despite being saline water. It has a land-locked basin separated from the Indus River basin by a small elevated ridge, but is believed to have been part of the latter in prehistoric times. 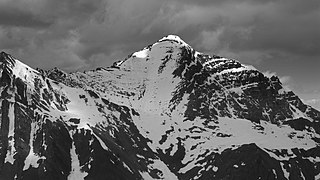 Leh district is a district in the union territory of Ladakh, a territory administered as part of India. With an area of 45,110 km2, it is the second largest district in the country smaller only to Kutch. It is bounded on the north by Gilgit-Baltistan's Kharmang and Ghanche districts and Xinjiang's Kashgar Prefecture and Hotan Prefecture linked via the historic Karakoram Pass. It has Aksai Chin and Tibet are to the east, Kargil district to the west, and Lahul and Spiti to the south. The district headquarters is in Leh. It lies between 32 to 36 degree north latitude and 75 to 80 degree east longitude.

Ladakh has a long history with evidence of human settlement from as back as 9000 b.c. It has been the cross road of high Asia for thousands of years and has seen many cultures, empires and technologies taking birth in its neighbours. As a result of these developments Ladakh has imported many traditions and culture from its neighbours and combining them all gave rise to a unique tradition and culture of its own.

The Changtang is a part of the high altitude Tibetan Plateau in western and northern Tibet extending into the southern edges of Xinjiang as well as southeastern Ladakh, India, with vast highlands and giant lakes. From eastern Ladakh, the Changtang stretches approximately 1,600 kilometres (990 mi) east into Tibet as far as modern Qinghai. The Changtang is home to the Changpa, a nomadic Tibetan people. The two largest settlements within the Tibetan Changtang are Rutog Town the seat of Rutog County and Domar Township the seat of Shuanghu County.

Tourism is one of an economic contributor to the union territory of Ladakh in Northern India. The union territory is sandwiched between the Karakoram mountain range to the north and the Himalayas to the south and is situated at the height of 11,400 ft. Ladakh is composed of the Leh and Kargil districts. The region contains prominent Buddhist sites and has an ecotourism industry. 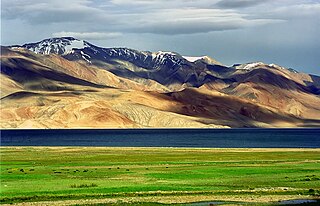 Tso Moriri or Lake Moriri or "Mountain Lake", is a lake in the Changthang Plateau of Ladakh in India. The lake and surrounding area are protected as the Tso Moriri Wetland Conservation Reserve.

Rupshu is a high altitude plateau and valley and an eponymous community development block in southeast Ladakh.

Suraj Tal, also called Tso Kamtsi or Surya Tal, is a 800 m long lake that lies just below the 4,890 m (16,040 ft) high Bara-lacha-la pass in Lahaul and Spiti district of the Indian state of Himachal Pradesh. It is the third highest lake in India, and the 21st-highest in the world. Suraj Tal Lake is just below the source of the Bhaga River that joins the Chandra River downstream at Tandi to form the Chandrabhaga River in Himachal Pradesh. The Chandrabhaga River is known as the Chenab as it enters the Jammu region of Jammu and Kashmir. The other major tributary of the Chandrabhaga, the Chandra originates and flows south-east of the Bara-lacha La.

Korzok, is a Tibetan Buddhist monastery belonging to the Drukpa Lineage. It is located in the Korzok village, on the northwestern bank of Tso Moriri (lake) in Leh District, Ladakh, India. The gompa (monastery), at 4,560 metres (14,960 ft), houses a Shakyamuni Buddha and other statues. It is home to about 70 monks. 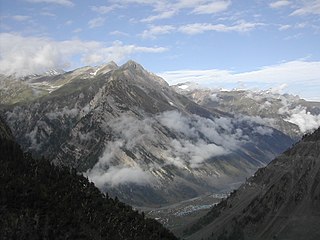 Zoji La is a high mountain pass in the Himalayas in the Indian union territory of Ladakh. Located in the Dras, the pass connects the Kashmir Valley to its west with the Dras and Suru valleys to its northeast and the Indus valley further east.

The Khurnak Fort is a ruined fort on the northern shore of the Pangong Lake that spans eastern Ladakh in India and Rutog County in the Tibet region of China. The area of the Khurnak Fort is disputed by India and China, and has been under Chinese administration since 1958.

Chumathang is a village in Leh District, Ladakh in northern India on the banks of the Indus river. 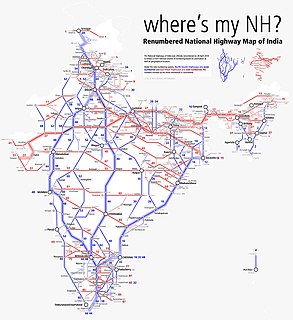 National Highway 1 in India runs between the union territories of Jammu & Kashmir and Ladakh. It comprises parts of old NH1A and NH1D. The number 1 indicates, under the new numbering system, that it is the northernmost East-West highway in India.

Tangtse (Tanktse or Tankse) is a village in the Leh district of Ladakh, India. It is located in the Durbuk tehsil. Traditionally, it was regarded as the border between the Nubra region to the north and the Pangong region to the south. It was a site of wars between Ladakh and Tibet.

The Ladakh Marathon is a marathon held in Leh, a town in the Indian Union Territory of Ladakh. It claims to be the highest marathon in the world, held at a height of 11,500 to 17,618 feet. The seventh edition of the Ladakh Marathon was held in 2018 and its ninth edition is happening in September 2022 after being cancelled for two subsequent years due to the COVID-19 pandemic. It is full member of Association of International Marathons and Distance Races. The marathon was organised "to foster national spirit and to encourage sport in Ladakh". It is the fifth marathon from India to get international recognition. 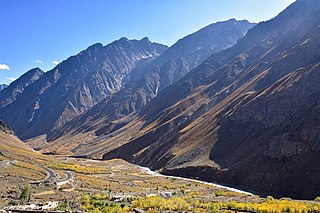 Nimmu–Padum–Darcha road or Zanskar Highway is a road under construction between the Indian union territory of Ladakh and the state of Himachal Pradesh, passing through the region of Zanskar. It connects Nimmu in the Indus Valley to Padum, the capital of Zanskar, to Darcha village in Lahul and Spiti. It provides an alternative to the Leh–Manali Highway in linking Ladakh with the rest of India. It is being built by the Border Roads Organisation (BRO) of the Indian army. Construction of road is expected to be completed by late 2023. Already completed Atal tunnel and the under-construction Shingo La Tunnel which will be completed by 2025 will provide all weather connectivity.

Kyagar Tso or Kyagar Lake is a small brackish lake surrounded by mountains situated in the Ladakh region of the northern Indian Union Territory of Ladakh in India. From afar, it can be spotted by its turquoise colour.