The Type L6 ship is a United States Maritime Administration (MARAD) designation for World War II as a Great Lakes dry break bulk cargo ship. The L-Type Great Lakes Dry Bulk Cargo Ships were built in 1943 for World War II. The ships has a 15,82 deadweight tonnage. The L6 ships were built by two companies: American Ship Building Company and Great Lakes Engineering Works,Ashtabula, Ohio/ Great Lakes Engineering Works, River Rouge, Ohio that built the type L6-S-B1 and American SB that built the class L6-S-A1. Steel supply needed for World War was great. To supply iron ore from Lake Superior to steel foundries, the United States Commission had a series of L6 Lakers ship built. The Maritime Commission ordered ten Great Lakes Bulk Carriers of the L6-S-B1 type. The L6-S-B1 was design with a 3-cylinder triple expansion steam engines. The L6-S-A1 used a lentz 4-zylinder compound engines. All L6 ships were coal burning and delivered between May and November 1943. [1] L6-S-B1 was built for the US Maritime Commission under USMC contract MCc-1834 in 1943 at the River Rouge yard. Each L6 ship cost $2.265 million. The first L6-S-B1 was the SS Adirondack/Richard J. Reiss, hull 290, keel was laid on March 9, 1942 and launched on September 19, 1942. The ships are often called the Class Lake Bulk Freighter now. [2]

Ship still active on the lakes: 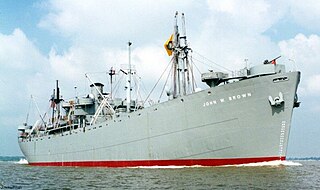 Liberty ships were a class of cargo ship built in the United States during World War II. Though British in concept, the design was adapted by the United States for its simple, low-cost construction. Mass-produced on an unprecedented scale, the Liberty ship came to symbolize U.S. wartime industrial output. 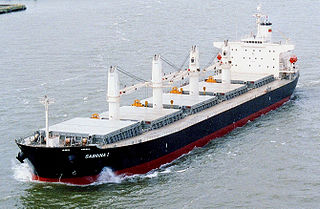 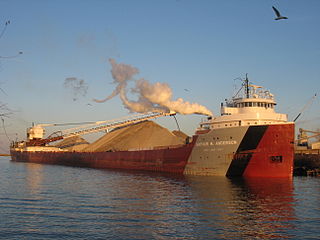 Lake freighters, or lakers, are bulk carrier vessels that ply the Great Lakes of North America. These vessels are traditionally called boats, although classified as ships.

The T2 tanker, or T2, was a class of oil tanker constructed and produced in large quantities in the United States during World War II. Only the T3 tankers were larger "navy oilers" of the period. Some 533 T2s were built between 1940 and the end of 1945. They were used to transport fuel oil, diesel fuel, gasoline and sometimes black oil-crude oil. Post war many T2s remained in use; like other hastily built World War II ships pressed into peacetime service, there were safety concerns. As was found during the war, the United States Coast Guard Marine Board of Investigation in 1952 stated that in cold weather the ships were prone to metal fatigue cracking, so were "belted" with steel straps. This occurred after two T2s, Pendleton and Fort Mercer, split in two off Cape Cod within hours of each other. Pendleton's sinking is memorialized in The Finest Hours. Engineering inquiries into the problem suggested the cause was poor welding techniques. It was found the steel was not well suited for the new wartime welding construction. The high sulfur content made the steel brittle and prone to metal fatigue at lower temperatures.

The Defoe Shipbuilding Company was a small ship builder established in 1905 in Bay City, Michigan, United States. It ceased to operate in 1976 after failing to renew its contracts with the United States Navy. The site of the former company is now being developed for business and housing on the bank of the Saginaw River. 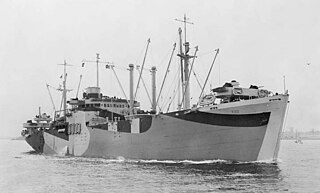 Type C1 was a designation for small cargo ships built for the United States Maritime Commission before and during World War II. The first C1 types were the smallest of the three original Maritime Commission designs, meant for shorter routes where high speed and capacity were less important. Only a handful were delivered prior to Pearl Harbor. But many C1-A and C1-B ships were already in the works and were delivered during 1942. Many were converted to military purposes including troop transports during the war.

The G-class submarines were a class of four United States Navy submarines. While the four G boats were nominally all of a class, they differed enough in significant details that they are sometimes considered to be four unique boats, each in a class by herself. They were the result of agitation for competition in submarine design; all previous US submarines were designed by Electric Boat. G-1, G-2, and G-3 were designed by Simon Lake of the Lake Torpedo Boat Company, while G-4 was designed by American Laurenti. G-1 was built by Newport News, G-2 and G-3 by Lake, and G-4 by Cramp.

SS Comet may also refer to one of several commercial passenger steamships:

SS Brulin was a lake freighter that worked the North American Great Lakes routes from 1924 to 1960. She was renamed Outarde in 1939, and James J. Buckler in 1960, shortly before she ran aground and sank during salvage operations. Brulin was built by Palmers Shipbuilding and Iron Company, Hebburn-on-Tyne and launched on 31 July 1924, for the Montreal Forwarding Company. She was built to the maximum dimensions of the canal locks that preceded the St Lawrence Seaway.

The T1 tanker or T1 are a class of sea worthy small tanker ships used to transport fuel oil before and during World War II, Korean War and Vietnam War. The T1 tanker classification is still in use today. T1 tankers are about 200 to 250 feet in length and are able to sustain a top speed of about 12 knots. The hull designation AO is used by the US Navy to denote the ship is a T1 oil tanker and AOG that the T1 is a gasoline tanker. The small size allows the T1 to enter just about any sea port or to anchor around a small island, this was very useful during the Pacific War. The T1 tanker can carry about 48,000 to 280,000 bbls. Some T1 tankers were used to transport goods other than oil, a few were used for black oil-crude oil, diesel, chemicals and rarely bulk cargo like grain. T1 tankers are also called liquid cargo carriers. The T1 tanker has about a 6,000 to 35,000 deadweight tonnage (DWT) of cargo. The small size also gives the ships short turn around time for repair, cleaning, loading and unloading. A T1 tanker carrying dirty cargo, like crude oil needs a few weeks of labor to clean before carrying clean cargo. Most T1 ships during World War II were named after major oil fields. T1 tankers are operated by the US Navy, War Shipping Administration and United States Maritime Commission. Some T1s were loaned to England in the Lend-Lease program for World War II, after the war most were returned to the US. After World War II many of the T1 ships were sold to for civilian use. Each T1 had emergency life rafts on the boat deck. The ships had cargo booms and piping to load and unload fuel. During war time the T1 are armed for protection with deck guns. A typical ship may have one single 3"/50 dual purpose gun, two 40 mm guns and three single Oerlikon 20 mm cannon. A T1 at war time normally had a crew of 38 and up to 130. If operating as a United States Merchant Marine ship, the crew would be a mix of civilian Merchant Marines and United States Navy Armed Guards to man the guns.

The Type C5 ship is a United States Maritime Administration (MARAD) designation for World War II breakbulk cargo and later a container ship for containerization shipments. The first type C5-class ship was a class of ships constructed and produced in the United States during World War II. The World War II C5-class ship was dry bulk cargo ship built by Bethlehem Steel in Sparrows Point, Maryland. Bethlehem Steel built eight ships in this bulk cargo class and four orders were canceled. The C5-class ship has a 24,250 DWT and was 560 feet (170 m) long. The C5 was mainly used as iron ore carriers. The C5 was needed to replace other ships that sank during World War II. First in her class was SS Venore, USMC #1982, delivered on 20 July 1945. The Type C5-class ship designed to fill the need to move iron ore from Santa Cruz, Chile, to Sparrows Point, Maryland, through the Panama Canal, a round-trip trip 8,700 nautical miles . Post World War II, four ships were given C5 class type C5-S-78a, these were roll-on/roll-off container ship built by Ingalls Shipbuilding, Inc. of Pascagoula, Mississippi and operated by the Moore-McCormack Lines. The C5-S-78a had a deadweight tonnage of 16,000 tons. The Type R ship is a United States Maritime Administration (MARAD) designation for World War II refrigerated cargo ship, also called a reefer ship. The R type ship was used in World War II, Korean War, Vietnam War and the Cold War. Type R ships were used to transport perishable commodities which require temperature-controlled transportation, such as fruit, meat, fish, vegetables, dairy products and other foods. The US Maritime Commission ordered 41 new refrigerated ships for the US Navy. Because of the difficulty of building refrigerated ships only two were delivered in 1944, and just 26 were delivered in 1945 and the remainder in 1946–48. The 41 R type ships were built in four groups. Two of design types were modified type C1 ships and two were modified type C2 ships. The United Fruit Company operated many of the R type ships in World War II. The type R2-S-BV1 became the US Navy Alstede-class stores ship and the type R1-M-AV3 became the US Navy Adria-class stores ship.

The Type V ship is a United States Maritime Commission (MARCOM) designation for World War II tugboats. Type V was used in World War II, Korean War and the Vietnam War. Type V ships were used to move ships and barges. Type V tugboats were made of either steel or wood hulls. There were four types of tugboats ordered for World War II. The largest type V design was the sea worthy 186-foot (57 m) long steel hull, V4-M-A1. The V4-M-A1 design was used by a number of manufacturers; a total of 49 were built. A smaller steel hull tugboat was the 94-foot (29 m) V2-ME-A1; 26 were built. The largest wooden hull was the 148-foot (45 m) V3-S-AH2, which 14 where built. The smaller wooden hull was the 58-foot (18 m) V2-M-AL1, which 35 were built. Most V2-M-AL1 tugboats were sent to England for the war efforts under the lend-lease act. The Type V tugs served across the globe during Work War II including: Pacific War, European theatre and in the United State. SS Farallon and other Type V tugs were used to help built Normandy ports, including Mulberry harbour, on D-Day, June 6, 1944 and made nine round trips to Normandy to deliver Phoenix breakwaters.

SS Choctaw was a semi-whaleback freighter built by the Cleveland Shipbuilding Company in 1892. She was a monitor vessel that was designed to evade Alexander McDougall's patent on the whaleback vessel design. She sank on July 11, 1915, on Lake Huron after a collision with the Canadian package freighter Wahcondah. For more than 100 years the location of Choctaw's wreck remained unknown until she was discovered perfectly preserved and on her side on May 23, 2017, in about 300 feet (90m) of water.

SS Senator was a steel-hulled Great Lakes freighter that sank on Lake Michigan with the loss of nine lives and 268 Nash automobiles, on Halloween of 1929 after she was rammed in heavy fog by the bulk carrier Marquette. She lies in 450 feet (140 m) of water 16 miles northeast of Port Washington, Wisconsin. On April 12, 2016 her wreck was listed on the National Register of Historic Places.