USS Salem (CM-11) was a commercial cargo ship, that served as a minelayer and then net laying ship of the United States Navy during World War II.

The ship was built in 1916 by William Cramp & Sons, Philadelphia, as SS Joseph R. Parrott; was acquired by the U.S. Navy on 8 June 1942 from the Maritime Commission; and commissioned on 9 August 1942, Lt. Comdr. Henry G. Williams in command.

Following training exercises, Salem departed Brooklyn, New York, on 13 November 1942, as part of a convoy, and arrived at Casablanca on 1 December. She laid 202 mines off that port on 27 and 28 December and helped fight off an air raid there on 31 December. On 20 January 1943, she sailed from Casablanca and arrived at Norfolk, Virginia, on 9 February.

After repairs, she left the United States again on 13 June and arrived at Oran on 5 July. The minelayer got underway the next day as part of the Sicily invasion force; and, on 11 July, laid 390 mines off Gela, Sicily, in company with Weehawken (CM-12) and Keokuk (CM-8). Returning to Oran on 17 July, Salem subsequently carried 255 British troops from Gibraltar to Oran and then moved to Bizerte in preparation for landings in Italy. However, her role in these landings was cancelled due to the Italian surrender. The ship left Mers el Kebir on 7 October and returned to New York on 26 October.

Salem was repaired at Norfolk, Virginia, and carried out local operations along the Atlantic coast until 11 May 1944, when she departed Hampton Roads, Virginia, for duty with Service Squadron 6 in the Pacific. On 27 June, she sailed from Pearl Harbor with a cargo of ammunition, which she offloaded to shore facilities and combatant ships after her arrival at Eniwetok on 8 July. She then shuttled between Eniwetok, Kwajalein, Makin, Majuro, Saipan, and Tinian, helping to carry ammunition to forward areas for issue to the fleet. At Tinian on 4 October, her stern touched bottom in heavy swells, damaging both screws, and Sirius (AK-15) and an Army tug towed her back to Pearl Harbor. After arrival on 5 November, she underwent repairs and temporary conversion into a net cargo ship.

Salem completed conversion on 10 February 1945 and departed Pearl Harbor on 18 February with a cargo of anti-torpedo nets. After stops at Eniwetok, Ulithi, and Leyte, Salem arrived off Kerama Retto on 26 March 1945 as troops went ashore to secure the island and its harbor for use as a fleet base for the invasion of Okinawa. During the next two days, Salem laid antisubmarine nets to protect the harbor.

Japanese air attacks were frequent; and, on 2 April, Salem's gunners helped shoot down a plane that was trying to crash into Lunga Point (CVE-94). Salem departed Kerama Retto two days later and arrived at Pearl Harbor on 27 April, where she picked up a new cargo of nets. Departing Pearl Harbor on 24 May, she unloaded her nets at Guam between 12 and 19 June, and then proceeded to Eniwetok where she repaired nets between 24 June and 31 July.

Salem returned to Pearl Harbor on 10 August, and on 15 August, the day fighting stopped in the Pacific, was renamed as USS Shawmut to permit a new cruiser to be named USS Salem.

Departing Pearl Harbor on 31 August, she arrived at San Francisco, California, on 10 September for inactivation. Shawmut was decommissioned on 6 December 1945, struck from the Navy List on 3 January 1946, and transferred to the Maritime Commission on 20 June 1946. She was sold on 7 March 1947 to the West India Fruit and Steamship Company, and served as SS Joseph R. Parrott under the Honduran flag until 1970.

USS Suffolk (AKA-69) was a Tolland-class attack cargo ship of the United States Navy, named after counties in Massachusetts and New York. Suffolk was designed to carry military cargo and landing craft, and to use the latter to land weapons, supplies, and Marines on enemy shores during amphibious operations. She served as a commissioned ship for 20 months.

USS Adams (DM-27) was a destroyer minelayer in the United States Navy. She was named for Lieutenant, junior grade Samuel Adams. The other two USS Adams that have existed were named after the second president.

USS Tolman (DD-740/DM-28/MMD-28) was a Robert H. Smith-class destroyer minelayer in the United States Navy. She was named for Commander Charles E. Tolman. As of 2009, no other ship has been named Tolman. 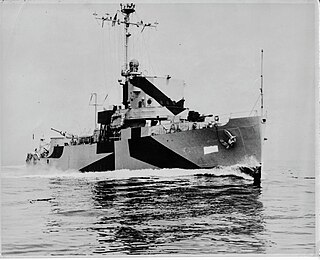 USS Shelter (AM-301) was an Admirable-class minesweeper built for the United States Navy during World War II. After service in the Pacific during World War II, Shelter was decommissioned in June 1946 and placed in reserve. In January 1964, she was transferred to South Vietnam for service in the Republic of Vietnam Navy as RVNS Chi Linh (HQ-11). She remained in South Vietnamese service until the collapse of that country in 1975. Chi Linh was one of several ships that fled from South Vietnam to the Philippines. She was then commissioned into the Philippine Navy in April 1976 as RPS Datu Tupas (PS-18), named after a chieftain of Cebu. The ship's fate is not reported in secondary sources. 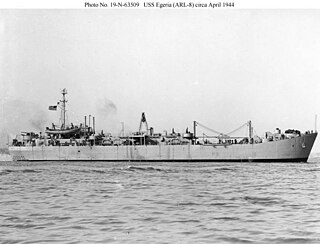 USS Egeria (ARL-8) was one of 39 Achelous-class landing craft repair ships built for the United States Navy during World War II. Named for Egeria, she was the only U.S. Naval vessel to bear the name.

USS Strive (AM-117) was an Auk-class minesweeper acquired by the United States Navy for the dangerous task of removing mines from minefields laid in the water to prevent ships from passing.

USS Monadnock (ACM-10) was a coastal minelayer in the U.S. Navy named after USS Monadnock, a civil war monitor.

USS Keokuk (AN-5/CM-8/CMc-6/AKN-4) was a mine and net laying ship of the United States Navy during World War II.

USS Weehawken (CM-12) was originally SS Estrada Palma — a car ferry built in 1920 by William Cramp & Sons of Philadelphia. It was acquired by the United States Navy on 15 June 1942; renamed Weehawken on 18 July 1942; converted to a minelayer by the Bethlehem Steel Co. at Hoboken, New Jersey; designated CM-12; and commissioned on 30 September 1942, Lt. Cmdr. Ralph E. Mills, USNR, in command.

USS Tekesta (AT-93) was Navajo-class fleet tug built during World War II for the United States Navy. Shortly after being built, it was crewed by trained Navy personnel and sent into the Pacific Ocean to provide tug service to damaged ships in battle areas. For successfully performing this dangerous work, she was awarded four battle stars by the war's end.

USS Sederstrom (DE-31) was a Evarts-class destroyer escort of the United States Navy during World War II. She was promptly sent to the Pacific Ocean to escort convoys and to protect other ships from Japanese planes and submarines. Her assignments took her from one battle area to another, but she was fortunate in remaining almost unscathed by the end of the war. For her efforts in battle areas, she was awarded five battle stars by war's end.

The second USS Tisdale (DE-33) was an Evarts-class destroyer escort of the United States Navy during World War II. She was promptly sent off into the Pacific Ocean to protect convoys and other ships from Japanese submarines and fighter aircraft. She performed dangerous work in numerous battle areas, and returned home proudly with four battle stars.

USS Matar (AK-119) was a Crater-class cargo ship, converted from a Liberty Ship, commissioned by the US Navy for service in World War II. She was first named after Napoleon B. Broward, an American river pilot, captain, and politician; he was elected as the 19th Governor of the US state of Florida. She was renamed and commissioned after Matar, a binary star in the constellation of Pegasus. She was responsible for delivering troops, goods and equipment to locations in the war zone.

USS Adria (AF-30) was an Adria class stores ship stores ship acquired by the U.S. Navy for service in World War II. Her task was to carry stores, refrigerated items, and equipment to ships in the fleet, and to remote stations and staging areas.

USS Terebinth (AN-59) – laid down as USS Balm (YN-78) – was a Ailanthus-class net laying ship which served with the U.S. Navy during World War II. Terebinth served in the Pacific Ocean theatre of operations and was awarded a battle star for her participation in the Okinawa campaign. Post-war she was decommissioned and sold.

USS Arapaho (AT-68/ATF-68) was a Navajo-class fleet ocean tug which served the U.S. Navy during World War II with her towing services. She was assigned initially to support the U.S. Atlantic Fleet, and was eventually assigned to support Allied forces in the war zones of the Pacific Ocean, resulting in her crew returning home after the war with four battle stars to their credit. 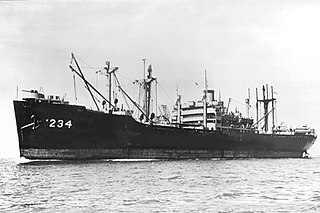 USS Bucyrus Victory (AK-234) was a Boulder Victory-class cargo ship acquired by the U.S. Navy during World War II. She served in the Pacific Ocean theatre of operations through the end of the war, earning one battle star, and then returned to the United States for disposal.

USS Rednour (APD-102) was a Crosley-class high speed transport that served in the United States Navy from 1945 to 1946. In December 1969, she was transferred to Mexico and served as Chihuahua until July 2001.