The UMass Minutemen Ice Hockey team is a National Collegiate Athletic Association (NCAA) Division I men's college ice hockey program that represents the University of Massachusetts Amherst. The Minutemen are a member of Hockey East. They play at the 8,387-seat William D. Mullins Memorial Center (known as the Mullins Center) in Amherst, Massachusetts. [2]

The centrally located pond on the UMass campus was once used for multiple purposes. In the winter students and faculty would cut out blocks of ice to use for refrigeration and annual tug-of-war games between sophomores and freshmen were hosted during the spring months. In 1909 the first formal ice hockey team began playing on the pond as well. [3] UMass fielded one of the earliest non-ivy league programs, playing continually until poor weather conditions and a lack of funding caused the team to cease in 1939. The Minutemen were able to return to the ice after the war but couldn't play at home until 1954.

The lack of a home venue caused the team to suffer through a stretch where they won only 2 games over a 7-year period. Eventually the pond became usable again and UMass were able to play home games with new head coach Steve Kosakowski. The Minutemen performed decently in his 13 seasons and were among 28 teams to found ECAC Hockey. In 1964 the ECAC split into two divisions and any program that did not possess a dedicated indoor arena was placed in ECAC 2. UMass continued with the second-tier conference for 15 years and achieved their greatest success in 1972 under Jack Canniff, winning the conference tournament title.

By the end of the 1970s using the pond as a rink had become untenable and when no alternatives surfaced the program was shuttered.

Return to the Ice

When the Mullins Center opened in 1993 it was designed as a multi-purpose arena and allowed for the university to rekindle its ice hockey program. The men's team started the same year and hit the ice as a Division I independent. With 20 wins in the first season under Joe Mallen, there was hope that the Minutemen could compete in Hockey East. However, once they began a tougher schedule in 1994–95, the team lost a then-school-record 28 games. Though the team rarely finished last in the conference under Mallen, there were very few gains and he was replaced by Don Cahoon in 2000.

Under Cahoon the team began to improve, posting a winning season in 2003 and reaching the conference championship game the following year. His greatest success came after recruiting Jonathan Quick, who helped UMass to reach their first ever NCAA Tournament in 2007. Cahoon couldn't keep the success going, however, and after being knocked off in five consecutive conference quarterfinals he retired in 2012.

John Micheletto was tabbed as Cahoon's successor and after a decent first season the team slid down the standing and bottomed out for two consecutive seasons. After the second last-place finish Micheletto was fired and replaced by St. Lawrence head coach Greg Carvel. [4]

In Carvel's first season the team reached a nadir; the Minutemen set a new program record for futility, losing 29 games. Carvel led the team to a much-improved finish in his second season and then team took off in year three. The Minutemen reached their first ever Frozen Four and a berth in the 2019 NCAA Division I National Championship in which the Minutemen ultimately lost to Minnesota-Duluth 3–0. Though the year ended on a sour note, the team posted a new program record for wins (31) while Cale Makar won the school's first Hobey Baker Award.

Statistics current through the start of the 2021–22 season.

On March 6, 2015, UMass faced Notre Dame in Game 1 of the Opening Round of the 2015 Hockey East Men's Ice Hockey Tournament, played at Compton Family Ice Arena at Notre Dame. Early into the game, Sam Herr gave Notre Dame the lead on a rebounded shot. Vince Hinostroza made it 2–0 midway through the second period. But the Minutmen responded two minutes later with a power play goal by Steven Iacobellis. Notre Dame responded three minutes later with a Steven Fogarty goal to make it 3–1. UMass made it 3–2 a minute later with a goal by Shane Walsh. With two seconds remaining in the period, Troy Power tipped a power play goal to tie the game as the second period (a period that had five goals in total) ended. The third period ended with no goals, as the two teams went into overtime. The two teams repeatedly failed to score, with UMass shooting a record 91 times and Notre Dame shooting 78 times. With 8:18 left in the fifth overtime and at 1:24 a.m. ET, Shane Walsh scored the game-winning goal to end the longest Division I hockey game which had lasted 151 minutes, 42 seconds, besting the previous record of 150:22, set by Quinnipiac and Union in 2010. [10]

Steve Mastalerz finished the night with 75 saves for UMass while Cal Petersen of Notre Dame made 87 saves, setting a new NCAA record. It was UMass' first win at the Tournament since March 13, 2009 at Northeastern.

Minutemen in the NHL

The UMass Minutemen are the athletic teams that represent the University of Massachusetts Amherst; strictly speaking, the Minutemen nickname applies to men's teams and athletes only — women's teams and athletes are known as Minutewomen. The Minutemen and Minutewomen compete in NCAA Division I sports competition primarily as members of the Atlantic 10 Conference. UMass is one of only 16 universities in the nation that plays Division I FBS football and Division I men's ice hockey. The nickname is also applied to club teams that do not participate within the NCAA structure.

The Notre Dame Fighting Irish men's ice hockey team is the college ice hockey team of the University of Notre Dame, competing at the NCAA Division I level as an associate member of the Big Ten Conference. The Irish play their home games at Compton Family Ice Arena. The head coach of the Fighting Irish is Jeff Jackson, and his assistant coaches are Paul Pooley, Andy Slaggert, and Max Mobley.

The Ohio State Buckeyes men's ice hockey team is an NCAA Division I college ice hockey program that represents Ohio State University. The Buckeyes are a member of the Big Ten Conference. They play at Value City Arena in Columbus, Ohio.

Justin Timothy Braun is an American professional ice hockey player currently playing for the Philadelphia Flyers of the National Hockey League (NHL). Braun was born in Saint Paul, Minnesota, and grew up nearby in White Bear Lake, Minnesota. He previously played for the San Jose Sharks.

Gregory Joseph Carvel is an American former NCAA ice hockey player. He is currently the head coach for the UMass Minutemen of the Hockey East conference. Carvel has been a head coach at St Lawrence University and an assistant coach in the National Hockey League (NHL) with both the Anaheim Ducks and Ottawa Senators.

Don 'Toot' Cahoon is a retired American ice hockey coach. He was the head coach of the Princeton Tigers when they won their first conference tournament championship in 1998. For almost 40 years Cahoon worked behind the bench of various collegiate hockey programs, reaching the NCAA tournament twice as a head coach.

The 2014–15 UMass Minutemen ice hockey team represented the University of Massachusetts Amherst during the 2014–15 NCAA Division I men's ice hockey season. The team was coached by John Micheletto, in his 3rd season with the Minutemen. The Minutemen played their home games at the Mullins Center on campus in Amherst, Massachusetts, competing in Hockey East.

The 2015 Hockey East Men's Ice Hockey Tournament was played between March 6 and March 21, 2015 at campus locations and at the TD Garden in Boston, Massachusetts. The Boston University Terriers defeated the UMass Lowell River Hawks by a score of 5–3 to earn their 8th Hockey East championship in school history and earn Hockey East's automatic bid into the 2015 NCAA Division I Men's Ice Hockey Tournament. Jack Eichel was named tournament MVP.

Mark Dennehy is an American ice hockey head coach for the Binghamton Devils of the American Hockey League. 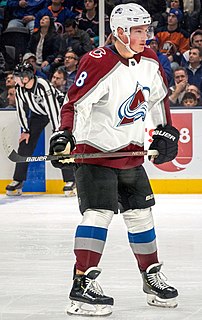 Cale Douglas Makar is a Canadian professional ice hockey defenceman for the Colorado Avalanche of the National Hockey League (NHL). He was selected in the first round, fourth overall, by the Avalanche in the 2017 NHL Entry Draft. Makar won the Calder Memorial Trophy as rookie of the year in 2019–20, becoming the sixth Avalanche/Nordiques player to win the award.

The UMass Minutemen women's ice hockey team represents the University of Massachusetts Amherst (UMass) in Women's Division 1 of the American Collegiate Hockey Association (ACHA) and in the Eastern Collegiate Women's Hockey League (ECWHL). The Minutemen are one of the ACHA's premier programs, having qualified for 16 of the 20 ACHA National Tournaments held for women's teams, a number second to Michigan State for the all-time lead. Additionally, UMass has won four ECWHL playoff titles and has been the home of two Zoë M. Harris Award winners, one of five ACHA D1 programs to produce multiple recipients of the honor.

The 2021 NCAA Men's Division I Ice Hockey Tournament was the national championship tournament for men's college ice hockey in the United States, scheduled for March 26–April 10, 2021. The tournament involved 16 teams in single-elimination play to determine the national champion at the Division I level of the National Collegiate Athletic Association (NCAA), the highest level of competition in college hockey. The first two rounds took place at four regional sites on March 26–28, and the tournament's Frozen Four – the semifinals and finals – was hosted by Robert Morris University at the PPG Paints Arena in Pittsburgh from April 8 to 10.

Calvin Louis Petersen is an American professional ice hockey goaltender for the Los Angeles Kings of the National Hockey League (NHL). He was selected in the fifth round, 129th overall by the Buffalo Sabres in the 2013 NHL Entry Draft. Petersen and the Sabres were not able to agree on a contract and on July 1, 2017, he signed a two-year entry level contract with the Kings as an unrestricted free agent.

Christopher Cale Morris is an American proffesional ice hockey goaltender for the Rockford IceHogs of the American Hockey League (AHL).

The 2019–20 UMass Minutemen ice hockey season was the 88th season of play for the program, the 30th season competing at the Division I level, and the 26th season in the Hockey East conference. The Minutemen represented the University of Massachusetts Amherst and were coached by Greg Carvel, in his 4th season.

The 2021 Hockey East Men's Ice Hockey Tournament was played between March 10 and March 20, 2021. Due to the COVID-19 pandemic, all games were played on campus locations, rather than the semifinal and final match traditionally being hosted at the TD Garden in Boston, Massachusetts. The UMass Minutemen defeated the UMass Lowell River Hawks to earn their 1st Hockey East tournament championship, and earned the conference's automatic bid into the 2021 NCAA Division I Men's Ice Hockey Tournament.

The 2020–21 UMass Minutemen ice hockey season was the 89th season of play for the program, the 31st season competing at the Division I level, and the 27th season in the Hockey East conference. The Minutemen represented the University of Massachusetts Amherst and were coached by Greg Carvel, in his 5th season. UMass won the first National Championship in program history.

Robert Nicholas Trivigno is an American ice hockey Left Wing who was an All-American for Massachusetts and was the Most Outstanding Player in his school's first National Championship in 2021.

Zachary Jones is an American professional ice hockey defenseman currently playing for the New York Rangers of the National Hockey League (NHL). Jones was drafted by the Rangers in the third round of the 2019 NHL Entry Draft.