Watson is a suburb of Canberra, Australia in the North Canberra district. Watson is named after the third Prime Minister of Australia, John Christian Watson. The suburb name was gazetted on 7 April 1960. Streets in Watson are named after Australian judges and other legal professionals. [2]

Watson is bordered by the Federal Highway, Phillip Avenue and Antill Street. Traffic loads on these roads has increased significantly with the continued development of Gungahlin and studies suggest some areas will exceed capacity before 2021. [3]

Located in Watson is a local shopping centre and several schools, television studios and motels. The former Watson High School now houses the Canberra Technology Park which includes the Academy of Interactive Entertainment (AIE) as a tenant. Rosary Catholic Primary School is located in Watson, as is the Signadou campus of the Australian Catholic University. There is also Majura Primary School (originally Watson Primary School) which is well known for its annual Spring Carnival.

One of Canberra's two former drive-in theatres, the Starlight Drive-in, was located on the Federal Highway in Watson. The site has now been redeveloped as a medium-density housing complex, although the drive-in's sign remains.

Also located in the suburb are Prime7 television studios, The Ted Noffs Foundation, the Academy of Interactive Entertainment, Canberra Carotel (motel and caravan park), Red Cedars motel, Hotel Ibis Budget, Canberra Potters Society, a C3 Church, YWAM (Youth with a Mission) and a BP service station. CTC-TV (now Southern Cross Nine), was located in the suburb from 1974 until June 2020 when the Watson studios were demolished and the station relocated to Fyshwick. [4]

Calcareous shales from the Canberra Formation is overlain in places by Quaternary alluvium. This rock includes the limestone of the original title of Canberra "Limestone Plains". [8] 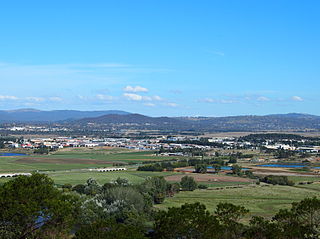 Fyshwick is a retail and light industry suburb of Canberra and is located east of the South Canberra district. At the 2016 census, Fyshwick had a population of 56 people.

The Monaro Highway is a highway in Victoria, New South Wales, and the Australian Capital Territory, in Australia.

Symonston is a primarily industrial and agricultural suburb of Canberra, Australian Capital Territory, Australia. Symonston is named after Sir Josiah Symon a Legislator, Federalist and one of the Founders of the Constitution of Australia. 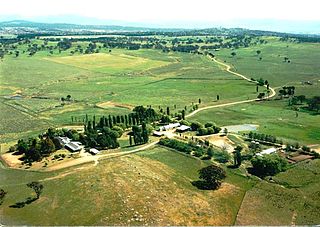 Calwell is a medium-sized suburb of Canberra, Australia in the district of Tuggeranong. Tuggeranong Hill is on its southern border and the Tuggeranong Homestead is to the north. Calwell is located close to the Monaro Highway which provides a direct route to Canberra City and to Cooma.

Waramanga is a suburb of Canberra, Australian Capital Territory, Australia in the district of Weston Creek. 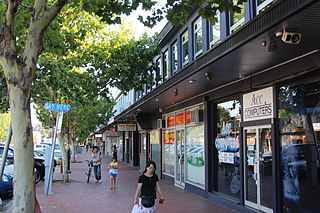 Dickson is a suburb in the Inner North of Canberra, Australia. It is named after Sir James Robert Dickson (1832–1901) who was a Queensland advocate of Australian Federation and one of the founders of the Australian Constitution. There is no specific theme for street names. 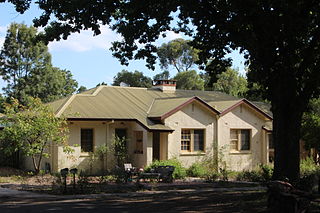 Ainslie is a suburb of Canberra, Australia in the North Canberra district.

McKellar is a residential suburb in the Belconnen district of Canberra, located within the Australian Capital Territory, Australia. The suburb is named after Colin McKellar who was Minister for Repatriation from 1964 to 1970. The suburb name was gazetted on 15 January 1974. The streets of McKellar are named for journalists with the main street of the suburb called Dumas Street. McKellar is bounded by Ginninderra Drive, William Webb Drive, Owen Dixon Drive, and Gundaroo Drive.

The Canberra Institute of Technology (CIT) is a vocational education provider in Australia's capital city Canberra, the city is located at the northern end of the Australian Capital Territory. CIT is the largest Technical and Further Education (TAFE) in New South Wales. Qualifications offered by CIT range from certificate to degree level. CIT has campuses across Canberra, located in Bruce, Reid, and Fyshwick. CIT also has two learning centres in Tuggeranong Town Centre and Gungahlin which are primarily for students studying via flexible or distance learning. CIT provides a wide range of education and training courses that focus on the skills and knowledge needed for the workplace and further study.

Hackett is an inner north suburb of Canberra, the capital city of Australia. Located approximately 4.5 km north-east of the central business district, Hackett is adjacent to Watson, Dickson and Ainslie. It is bounded by Antill Street and Philip Avenue, and the Mount Majura Nature Reserve to the east. Hackett has a neighbourhood oval, and shopping centre.

Chisholm is a suburb in the Canberra, Australia district of Tuggeranong, named after Caroline Chisholm.

Richardson is a suburb in the Canberra, Australia, district of Tuggeranong. The postcode is 2905. It was gazetted on 5 May 1975. Streets are named after writers, especially female writers. It is next to the suburbs of Calwell, Isabella Plains, Gowrie and Chisholm. It is bounded by Johnson Drive, Ashley Drive and Isabella Drive. This suburb is named after the novelist Ethel Florence Lindesay Richardson (1870–1946) who wrote under the pen name Henry Handel Richardson.

Majura Parkway is a 11.5-kilometre-long (7.1 mi) north–south parkway located in the Majura district of the Australian Capital Territory (ACT). It links the northern end to the Federal Highway and Horse Park Drive at the edge of Gungahlin district, and the southern end to the Monaro Highway in Pialligo. 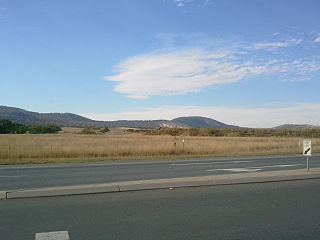 Majura Road is a major arterial road in the eastern rural area of Canberra, the capital city of Australia. The road runs north to south, beginning at a grade separated junction with the Federal Highway 1 km (0.62 mi) inside the border of the Australian Capital Territory. The route followed by the road passes to the east of Mount Majura and mostly rural and industrial properties including the Majura Military Training Area, Mount Majura Winery and a training facility for the Australian Federal Police towards the Majura Park development at Canberra Airport where it ends at Fairbairn Avenue. The road provides a convenient bypass of the city's Inner North from the Gungahlin district to Queanbeyan. Canberra Airport and the Monaro Highway. The route is signposted as an alternative to National Highway 23, the main route between Sydney and the Snowy Mountains and carries considerable volumes of heavy vehicle and tourist traffic.

Fairbairn Avenue is a major arterial road in the eastern suburbs of Canberra, the capital city of Australia. The road travels from a junction with Pialligo Avenue near Canberra Airport to the Australian War Memorial, a distance of 4.2 km (2.6 mi). It is the primary access route to the Australian Defence Force Academy, Campbell Park and Mount Ainslie. Fairbairn Avenue carries the Alternative National Highway 23 designation for a short distance between Majura Road and Morshead Drive. This eastern section suffers from heavy traffic congestion during morning and afternoon peak periods and a number of recent upgrades aim to address this. In 2009, works to improve access and traffic flows around the airport precinct saw Fairbairn Avenue duplicated between Pialligo Avenue - where an existing roundabout was replaced with traffic lights - and Morshead Drive, also improving the intersection with Majura Road. A grade separated interchange constructed over Fairbairn Avenue as part of the Majura Parkway project was completed in 2016. 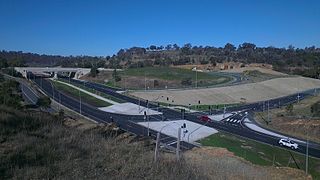 Horse Park Drive is an arterial road in the Gungahlin district of Canberra, Australia. It is named for the homestead Horse Park, built in 1853 which is located in the suburb of Jacka. The road provides a bypass of the Gungahlin town centre, linking the western suburbs of the district to the Federal Highway to Goulburn and the Majura Parkway, linking to the Monaro Highway and Canberra Airport.

Wikimedia Commons has media related to Watson, Australian Capital Territory .
This page is based on this Wikipedia article
Text is available under the CC BY-SA 4.0 license; additional terms may apply.
Images, videos and audio are available under their respective licenses.