The Wolfson History Prizes are literary awards given annually in the United Kingdom to promote and encourage standards of excellence in the writing of history for the general public. Prizes are given annually for two or three exceptional works published during the year, with an occasional oeuvre prize (a general award for an individual's distinguished contribution to the writing of history). They are awarded and administered by the Wolfson Foundation, with winning books being chosen by a panel of judges composed of eminent historians.

In order to qualify for consideration, a book must be published in the United Kingdom and the author must be a British subject at the time the award is made and normally resident in the UK. Books should be readable and scholarly and be accessible to the lay reader. Prizes are awarded in the summer following the year of the books' publication; however, until 1987 prizes were awarded at the end of the competition year.

Established in 1972 by the Wolfson Foundation, a UK charitable foundation, they were originally known as the Wolfson Literary Awards. [1] [2]

Awards after 2016 have a winner and shortlist of five.

The Booker Prize, formerly known as the Booker Prize for Fiction (1969–2001) and the Man Booker Prize (2002–2019), is a literary prize awarded each year for the best novel written in English and published in the United Kingdom or Ireland. The winner of the Booker Prize receives international publicity which usually leads to a sales boost. When the prize was created, only novels written by Commonwealth, Irish, and South African citizens were eligible to receive the prize; in 2014 it was widened to any English-language novel—a change that proved controversial.

The PEN/Faulkner Award for Fiction is awarded annually by the PEN/Faulkner Foundation to the authors of the year's best works of fiction by living American citizens. The winner receives US$15,000 and each of four runners-up receives US$5000. Finalists read from their works at the presentation ceremony in the Great Hall of the Folger Shakespeare Library in Washington, D.C. The organization claims it to be "the largest peer-juried award in the country." The award was first given in 1981.

The Victorian Premier's Literary Awards were created by the Victorian Government with the aim of raising the profile of contemporary creative writing and Australia's publishing industry. As of 2013, it is reportedly Australia's richest literary prize with the top winner receiving A$125,000 and category winners A$25,000 each.

The Orwell Prize, based at University College London, is a British prize for political writing. The Prize is awarded by The Orwell Foundation, an independent charity governed by a board of trustees. Four prizes are awarded each year: one each for a fiction and non-fiction book on politics, one for journalism and one for "Exposing Britain's Social Evils" ; between 2009 and 2012, a fifth prize was awarded for blogging. In each case, the winner is the short-listed entry which comes closest to George Orwell's own ambition to "make political writing into an art".

The Theakston's Old Peculier Crime Novel of the Year Award is one of the UK's top crime-fiction awards, sponsored by Theakston's Old Peculier. It is awarded annually at Harrogate Crime Writing Festival in the UK, held every July, as part of the Harrogate International Festivals. The winner receives £3000 and a small hand-carved oak beer cask carved by one of Britain's last coopers. Novels eligible are those crime novels published in paperback any time during the previous year. Voting is by the public with decisions of a jury-panel also taken into account, a fact not-much publicised by the award organisers, who are keen to emphasize the public-voting aspect of the award.

The International Prize for Arabic Fiction (IPAF) is the most prestigious and important literary prize in the Arab world.

The Dayton Literary Peace Prize is an annual United States literary award "recognizing the power of the written word to promote peace" that was first awarded in 2006. Awards are given for adult fiction and non-fiction books published at some point within the immediate past year that have led readers to a better understanding of other peoples, cultures, religions, and political views, with the winner in each category receiving a cash prize of $10,000. The award is an offshoot of the Dayton Peace Prize, which grew out of the 1995 peace accords ending the Bosnian War. In 2011, the former "Lifetime Achievement Award" was renamed the Richard C. Holbrooke Distinguished Achievement Award with a $10,000 honorarium.

Francis Spufford FRSL is an English author and teacher of writing whose career has seen him shift gradually from non-fiction to fiction. His first novel Golden Hill received critical acclaim and numerous prizes including the Costa Book Award for a first novel, the Desmond Elliott Prize and the Ondaatje Prize. In 2007 he was elected a Fellow of the Royal Society of Literature.

The Walter Scott Prize for historical fiction is a British literary award founded in 2010. At £25,000, it is one of the largest literary awards in the UK. The award was created by the Duke and Duchess of Buccleuch, whose ancestors were closely linked to Scottish author Sir Walter Scott, who is generally considered the originator of historical fiction with the novel Waverley in 1814.

The National Book Award for Fiction is one of five annual National Book Awards, which recognize outstanding literary work by United States citizens. Since 1987 the awards have been administered and presented by the National Book Foundation, but they are awards "by writers to writers." The panelists are five "writers who are known to be doing great work in their genre or field." 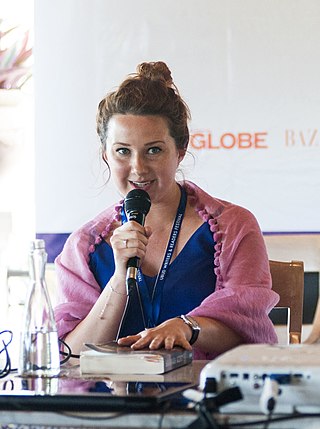 Marlon James is a Jamaican writer. He is the author of five novels: John Crow's Devil (2005), The Book of Night Women (2009), A Brief History of Seven Killings (2014), which won him the 2015 Man Booker Prize, Black Leopard, Red Wolf (2019), and Moon Witch, Spider King (2022). Now living in Minneapolis, Minnesota, in the U.S., James teaches literature at Macalester College in St. Paul, Minnesota. He is also a faculty lecturer at St. Francis College's Low Residency MFA in Creative Writing. 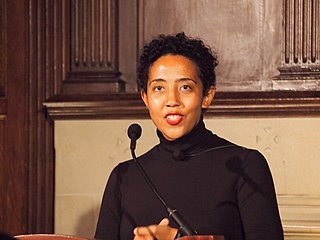 Carla Namwali Serpell is an American and Zambian writer who teaches in the United States. In April 2014, she was named on Hay Festival's Africa39 list of 39 Sub-Saharan African writers aged under 40 with the potential and talent to define trends in African literature. Her short story "The Sack" won the 2015 Caine Prize for African fiction in English. In 2020, Serpell won the Belles-lettres category Grand Prix of Literary Associations 2019 for her debut novel The Old Drift.

The Waterstones Book of the Year, established in 2012, is an annual award presented to a book published in the previous 12 months. Waterstones' booksellers nominate and vote to determine the winners and finalists for the prize.

Darcie Little Badger is an author and an Earth scientist.