World Animal Protection, formerly The World Society for the Protection of Animals (WSPA) is an international non-profit animal welfare organization that has been in operation for over 30 years. The charity describes its vision as: A world where animal welfare matters and animal cruelty has ended. [1]

The charity has regional hubs in: Africa, Asia, Europe, Latin America and North America, and offices in 14 countries. Its headquarters is in London.

Animals in the wild

In 1985 WSPA launched a campaign to outlaw bullfighting in cities in France and Spain. [5]

In the 1990s, the charity contributed to the prohibition of bear dancing in Greece, Turkey, and India. In India, the charity funded a sanctuary for bears previously used in the trade. [6] [7]

After a BBC investigation in September 2013, [8] the charity launched a campaign against the caged civet coffee trade. Several retailers have since stopped selling coffee produced by caged civets.[ citation needed ]

The charity campaigns in Asia for an end to the bear bile industry. [9] In Pakistan they work to end bear baiting by campaigning for a change in law, offering alternative livelihoods to bear owners and housing bears rescued from bear baiting in a purpose built sanctuary. [10]

A second focus is on stray dog population management itself, through proven humane methods such as education, improved legislation, registration and identification of dogs, sterilisation and contraception, holding facilities and rehoming centres. [15] They help governments design a program, and monitor and evaluate progress, using the model provided in the document "Humane Dog Population Management Guidance", developed in November 2007 by The International Companion Animal Management Coalition (ICAM Coalition), of which the organization is a member. [16]

Programs often include veterinary services such as mobile clinics for stray cats and dogs or those belonging to people who cannot afford veterinary care. The animals are sterilized, vaccinated, and provided other needed veterinary care. Such programs are provided in Sri Lanka, Zanzibar, Colombia, Brazil, Costa Rica, Sierra Leone, and Bali. [17]

A further focus is on helping working animals (horses, donkeys, and mules) in the West Bank, where mobile clinics were noticing increases in signs of neglect and cruelty. [18] Through a partner organization, the Palestine Wildlife Society, "In each community, we train a few people who can teach others about equine welfare. They attend workshops and visit communities where our training is already having an impact. They then share what they learn. Word spreads. Habits change. Animal welfare improves. And, because their animals are healthier, owners can earn a better living too." [18]

The charity has disaster operations teams in Asia and Latin America. In the aftermath of disasters they travel to worst affected areas to administer emergency veterinary care, distribute food and reunite animals with their owners where possible. The work is of particular benefit in developing world countries, where communities rely on animals for food, transport and income. [19] The charity also works with governments and local animal welfare groups in disaster-prone areas to set up national warning systems and teach communities how to protect their animals in the event of a disaster. [20] [21]

In November 2013 the charity were filmed for a BBC documentary called Vets in the Disaster Zone, during disaster response work in the Philippines after Typhoon Haiyan. The programme aired on BBC Two on 28 April 2014. [22]

World Animal Protection works with governments, food businesses and farmers to improve the welfare of farmed animals. They encourage the general public to buy food produced in line with high welfare standards.

The charity is campaigning for a universal declaration on animal welfare. [24] In 2013 they successfully lobbied the United Nations to include language on animal welfare in two General Assembly Resolutions on agriculture and disaster risk reduction. 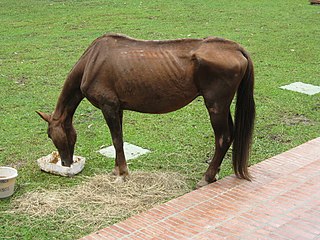 Cruelty to animals, also called animal abuse, animal neglect or animal cruelty, is the infliction by omission (neglect) or by commission by humans of suffering or harm upon any non-human animal. More narrowly, it can be the causing of harm or suffering for specific achievement, such as killing animals for entertainment; cruelty to animals sometimes encompasses inflicting harm or suffering as an end in itself, defined as zoosadism.

The Blue Cross of India (BCI) is an animal welfare charity based in Chennai, India. It was established in 1959 by Captain V. Sundaram, his wife Usha and their three children, in Chennai. The society was formally registered in 1964 under the Societies Registration Act. The nine signatories to the Articles and Memorandum of Association were Captain V. Sundaram, Usha Sundaram, S. Chinny Krishna, Suresh Sundaram, S. Vijayalakshmi, D. Daivasigamony, Kamakshi Krishnamoorthi, Sundari Nataraj and T. V. Chandrasekhar. It is now one of the country's largest animal welfare organisations. It runs several animal welfare programs including animal rights awareness.

The Philippine Animal Welfare Society (PAWS) is a volunteer-based, non-government organization whose goal is to prevent animal cruelty through education, animal sheltering and advocacy, based in Quezon City, Philippines. PAWS believes that the creation of a more peaceful society starts with the widening of mankind's circle of compassion which includes animals, thereby envisions a nation that respects animals, practices responsible pet ownership and protects wildlife. The volunteer-based organization rehabilitates these animals in the hope of finding them new homes and a second chance at a good life. PAWS does not take in pets of other people, but only victims of cruelty or neglect where the animal offenders are charged with violation of the Animal Welfare Act in court.

Karumkulam is a village in Thiruvananthapuram district in the state of Kerala, India.

Compassion and Responsibility for Animals (CARA) is a registered non-profit, non-government animal welfare organization in the Philippines. It was founded in 2000 by a group of animal lovers determined to help the plight of animals in the Philippines. The current president of CARA is Nancy Cu-Unjieng.

The 2009 Shanxi dog-free zone is a goal by the government of Shanxi Province in north central People's Republic of China (PRC) to begin killing large number of dogs as part of a campaign to stop the spread of rabies in the region via stray dogs attacking humans.

Mayhew, formerly known as The Mayhew Animal Home, is an animal welfare charity working to improve the lives of dogs, cats and the people in local communities – both in London and internationally. Mayhew's animal shelter, head office and Community Vet Clinic are based in Kensal Green, North London.

International Animal Rescue (IAR) is an animal protection and conservation non-profit organisation that comes to the aid of suffering animals with hands-on rescue and rehabilitation and the protection of wildlife habitats. IAR returns rehabilitated animals to the wild while also providing permanent sanctuary for those that cannot fend for themselves. Its work includes cutting free and caring for captive bears in India and Armenia, rescuing and rehabilitating orangutans and other primates in Indonesia and treating injured and orphaned howler monkeys in Costa Rica. IAR strives to educate the public in the humane treatment of all animals and the preservation of the natural environment. International Animal Rescue has offices in the United Kingdom, United States, India, Indonesia and Malta.

The KAT Centre is a nonprofit organization in Nepal. The KAT Centre's goals are to create a healthy, sustainable street dog population, reduce animal cruelty, and eliminate rabies, around Kathmandu, Nepal. 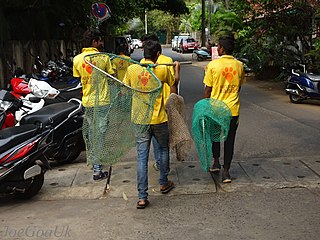 Mission Rabies is a charity that was initially founded as an initiative by Worldwide Veterinary Service (WVS), a United Kingdom-based charity group that assists animals. Mission Rabies has a One Health approach driven by research to eliminate dog bite transmitted rabies. Launched in September 2013 with a mission to vaccinate 50,000 dogs against rabies across India, Mission Rabies teams have since then vaccinated 968,287 dogs and educated 2,330,597 children in dog bite prevention in rabies endemic countries.

Vets for Change is a fully registered UK charitable organisation that was set up to provide financial and logistical support to community animal welfare projects around the world.

Animal welfare in Egypt is a neglected issue. There are only a few organizations that support the rights and wellbeing of animals.

The Soi Dog Foundation is a nonprofit organisation for the welfare of stray dogs and cats. Its headquarters is in Phuket, Thailand, and it has been legally registered in Thailand, the United States, Canada, Australia, France, United Kingdom, Switzerland, and The Netherlands. Its primary goal is to care for homeless and abused dogs in Thailand. It was established by British couple John and Gill Dalley with the help of Margot Homburg Park in Phuket in 2003.

Animal welfare and rights in Ethiopia is about the treatment of and laws concerning non-human animals in Ethiopia. Ethiopia has highly limited animal welfare regulations by international standards, and appears to have little animal activism.

Free-ranging dogs have become a public health issue in the state of Kerala in India. Two persons died from dog attacks in 2016, and many persons were injured. Efforts to control the population have created conflicts between Indian advocates of public safety and opponents of animal cruelty, and caused international backlash including calls for a boycott of tourism to Kerala. 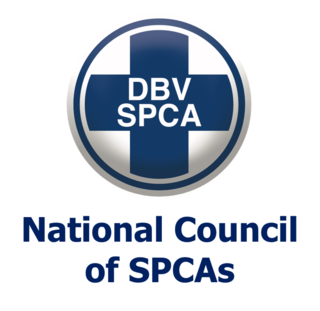 National Council of Societies for the Prevention of Cruelty to Animals (NSPCA), also known as the National Council of SPCAs, is the largest and oldest animal welfare organisation in South Africa. The NSPCA handles all matters relating to animal cruelty involving all animal species and is a registered Non-Profit Organisation registered with the Department of Social Development.

Animal welfare and rights in Goa refers to campaigns undertaken in the region of Goa, on the west coast of India, which has been on the rise in recent years. Goa is a popular tourist destination, visited by those from abroad and the rest of India, and concerns over animal rights has been built up both by local and visitor campaigns over the same.