The 2021 Chicago Marathon was held on October 10, 2021. It was the 43rd edition of the annual Chicago Marathon, and the first after the start of the COVID-19 pandemic in 2019. The 2020 Chicago Marathon was canceled as a result of the pandemic. [1] The race is the third of five World Marathon Majors scheduled for 2021; all the events in the series are being run in the span of six weeks between late September and early November. [2]

Participants were required to provide proof of COVID-19 vaccination or a negative COVID-19 test taken within 72 hours of attending the event. [3]

Results for the top ten in the running races and top three in the wheelchair races are listed below.

The Los Angeles Marathon is an annual running event held each spring in Los Angeles, California, since 1986. The marathon was inspired by the success of the 1984 Summer Olympic Games hosted in Los Angeles, and has become one of the largest marathons in the country, with more than 25,000 participants, thousands of volunteers, and hundreds of thousands of spectators.

The Berlin Marathon is a marathon event held annually on the streets of Berlin, Germany on the last weekend of September. Held annually since 1974, the event includes multiple races over the marathon distance of 42.195 kilometers, including elite level road running competitions for men and women, a race for the general public, an inline skating race, a wheelchair race and a handcycle race.

Grandma's Marathon is an annual road race held each June in Duluth, Minnesota, in the United States. The course runs point-to-point from the city of Two Harbors on Scenic Route 61 and continues along Lake Superior into the city of Duluth. The finish is located in Canal Park, near Grandma's Restaurant, which is next to the highly visible Aerial Lift Bridge.

The Ottawa Race Weekend is an annual weekend of road running events held the last weekend of May in the city of Ottawa, Ontario, Canada. The two-day running event includes seven races, including the Ottawa Marathon, all of which start and end at Ottawa City Hall. The marathon was first held in 1975, and is categorized as a Gold Label Road Race by World Athletics. Over 40,000 participants take part in the races each year.

The Harmony Geneva Marathon for UNICEF is an annual marathon running event held in Geneva, Switzerland. It draws about 9,100 participants every May. Apart from the marathon, there is also a half marathon, a Relay Marathon, a 20 km Handbike and wheelchair race, a 10 km race held on the same day, and races exclusively for women (5 km) and children held the day before. A time limit of six hours and a half applies to the main event. 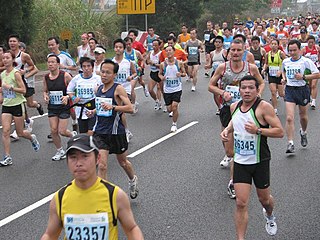 The Hong Kong Marathon (香港馬拉松), sponsored by Standard Chartered Bank, is an annual marathon race held in January or February in Hong Kong. In addition to the full marathon, a 10 km run and a half marathon are also held. Around 70,000 runners take part each year across all events.

The Kyiv Half Marathon is an annual road running event over the half marathon distance which is held in April on the streets of Kyiv, Ukraine since 2011. In 2015 Kyiv half marathon became a full member of the AIMS. It carries World Athletics Silver Label Road Race status. The race is part of the Run Ukraine Running League, an annual series of races held in Ukrainian cities.

The 2021 Boston Marathon was the 124th running of the annual marathon race held in Boston, Massachusetts. It took place on October 11, 2021.

The 2021 Berlin Marathon was a marathon race held on 26 September 2021. It was the 47th edition of the annual Berlin Marathon. It was the first edition of the Berlin Marathon to take place after the start of the COVID-19 pandemic in 2019. The 2020 Berlin Marathon was cancelled as a result of the COVID-19 pandemic. The race was the first of the five World Marathon Majors held in 2021; all the events in the series are being run in the space of six weeks between late September and early November. The marathon distance is just over 26 miles (42 km) in length and the course is run around the city and starts and finishes in the Tiergarten.

Seifu Tura Abdiwak is an Ethiopian long-distance runner. Tura originally specialized in middle-distance running, having won the 3000 m event of the 2015 Janusz Kusociński Memorial in Szczecin, Poland, with a time of 7:56.22.