Agriculture in Uruguay constitutes a significant factor in the economic life of the country.

Agriculture played such an important part in Uruguayan history and national identity until the middle of the 20th century that the entire country was then sometimes likened to a single huge estancia (agricultural estate) with Montevideo, where the wealth generated in the hinterland was spent, as its casco or administrative head. As another saying went, "Uruguay es la vaca y el puerto" ("Uruguay is the cow and the port"). However, when world market prices for Uruguay’s main export commodities like beef and wool fell drastically in the 1950s, the country's prosperous golden era came to an end.

Today, agriculture still contributes roughly 10% to the country’s GDP and is the main foreign exchange earner, putting Uruguay in line with other agricultural exporters like Brazil, Canada and New Zealand. Uruguay is a member of the Cairns Group of exporters of agricultural products. Uruguay’s agriculture has relatively low inputs of labour, technology and capital in comparison with other such countries, which results in comparatively lower yields per hectare but also opens the door for Uruguay to market its products as "natural" or "ecological."

Campaigns like “Uruguayan grass-fed beef” and “Uruguay Natural” aim to establish Uruguay as a premium brand in beef, wine and other food products.

Estancia tourism is based upon traditional, historical elements of Uruguay and the remaining resources of the historic ranches (estancias) from Uruguay's "Golden Era". 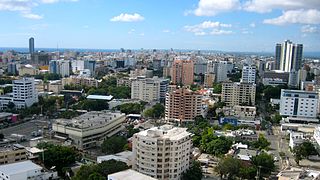 The economy of the Dominican Republic is the eighth largest in Latin America, and is the largest in the Caribbean and Central American region. The Dominican Republic is an upper-middle income developing country primarily dependent on mining, agriculture, trade, and services. The country is the site of the single largest gold mine in Latin America, the Pueblo Viejo mine. Although the service sector has recently overtaken agriculture as the leading employer of Dominicans, agriculture remains the most important sector in terms of domestic consumption and is in second place in terms of export earnings. Tourism accounts for more than $1 billion in annual earnings. free-trade zone earnings and tourism are the fastest-growing export sectors. According to a 1999 International Monetary Fund report, remittances from Dominican Americans, are estimated to be about $1.5 billion per year. Most of these funds are used to cover basic household needs such as shelter, food, clothing, health care and education. Secondarily, remittances have financed small businesses and other productive activities.

Although Australia is the driest nation in the world, with most the country being desert, the nation is a major agricultural producer and exporter, with over 325,300 employed in agriculture, forestry and fishing as of February 2015. Agriculture and its closely related sectors earn $155 billion-a-year for a 12% share of GDP. Farmers and graziers own 135,997 farms, covering 61% of Australia's landmass. Approximately 64% of all farms across Australia belong to the state, with a further 23% that are still owned by indigenous groups or tribes. Across the country there is a mix of irrigation and dry-land farming. Australia leads the world with 35 million hectares certified organic, which is 8.8% of Australia's agricultural land and Australia now accounts for more than half (51%) of the world's certified organic agriculture hectares. The success of Australia to become a major agricultural power despite the odds is facilitated by its policies of long-term visions and promotion of agricultural reforms that greatly increased the country's agricultural industry.

The economy of South America comprises approximately 410 million people living in twelve nations and three territories. It encompasses 6 percent of the world's population. 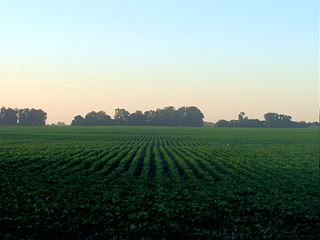 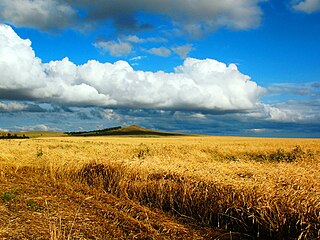 Agriculture in Kazakhstan remains a small scale sector of Kazakhstan's economy. Agriculture's contribution to the GDP is under 10% - it was recorded as 6.7%, and as occupying only 20% of labor. At the same time, more than 70% of its land is occupied in crops and animal husbandry. Compared to North America, a relatively small percentage of land is used for crops, with the percentage being higher in the north of the country. 70% of the agricultural land is permanent pastureland.

The agriculture of Brazil is historically one of the principal bases of Brazil's economy. While its initial focus was on sugarcane, Brazil eventually became the world's largest exporter of coffee, soybeans, beef, and crop-based ethanol.

In 2004, agriculture and forestry accounted for 21.8 percent of Vietnam's gross domestic product (GDP), and between 1994 and 2004, the sector grew at an annual rate of 4.1 percent. Agriculture's share of economic output has declined in recent years, falling as a share of GDP from 42% in 1989 to 26% in 1999, as production in other sectors of the economy has risen. However, agricultural employment was much higher than agriculture's share of GDP; in 2005, approximately 60 percent of the employed labor force was engaged in agriculture, forestry, and fishing. Agricultural products accounted for 30 percent of exports in 2005. The relaxation of the state monopoly on rice exports transformed the country into the world's second or third largest rice exporter. Other cash crops are coffee, cotton, peanuts, rubber, sugarcane, and tea. 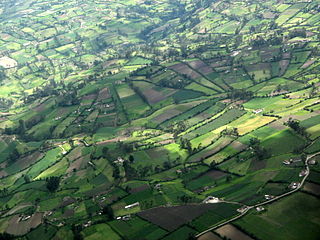 Agriculture in Colombia refers to all agricultural activities, essential to food, feed, and fiber production, including all techniques for raising and processing livestock within the Republic of Colombia. Plant cultivation and livestock production have continuously abandoned subsistence agricultural practices in favour of technological farming resulting in cash crops which contribute to the economy of Colombia. The Colombian agricultural production has significant gaps in domestic and/or international human and animal sustenance needs. 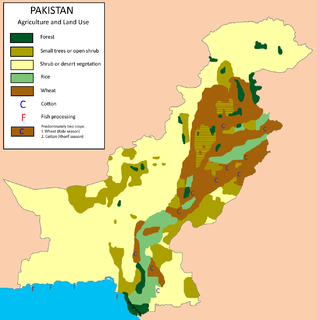 Agriculture is considered the backbone of Pakistan's economy, which relies heavily on its major crops. Pakistan's principal natural resources are arable land and water. Agriculture accounts for about 18.9% of Pakistan's GDP and employs about 42.3% of the labour force. In Pakistan, the most agricultural province is Punjab where wheat and cotton are the most grown. Mango orchards are mostly found in Sindh and Punjab provinces that make Pakistan the world's 4th largest producer of mangoes. 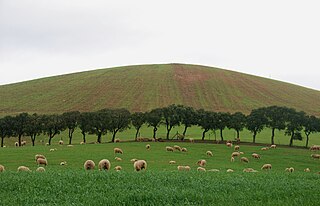 Agriculture in Portugal is based on small to medium-sized family-owned dispersed units; however, the sector also includes larger-scale intensive farming export-oriented agrobusinesses backed by companies. The extent of cooperative organisation has been reaching a greater importance with globalization. Portugal produces a wide variety of products, including green vegetables, rice, corn, wheat, barley, olives, oilseeds, nuts, cherries, bilberry, table grapes and edible mushrooms. Forestry has also played an important economic role among the rural communities and industry. In 2013, the gross agricultural product accounted for 2.4% of the GDP. Portugal is one of the world's largest producers of wine and cork. The land area of slightly more than 9.2 million hectares was classified as follows : 2,755 arable land and permanent crops, 530 permanent pasture, 3,640 forest and woodland, and 2,270 other land. 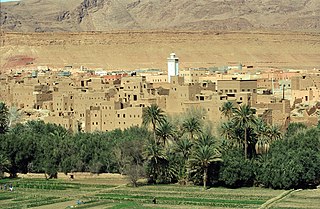 Agriculture in Morocco employs about 40% of the nation's workforce. Thus, it is the largest employer in the country. In the rainy sections of the northwest, barley, wheat, and other cereals can be raised without irrigation. On the Atlantic coast, where there are extensive plains, olives, citrus fruits, and wine grapes are grown, largely with water supplied by artesian wells. Morocco also produces a significant amount of illicit hashish, much of which is shipped to Western Europe. Livestock are raised and forests yield cork, cabinet wood, and building materials. Part of the maritime population fishes for its livelihood. Agadir, Essaouira, El Jadida, and Larache are among the important fishing harbors. Both the agriculture and fishing industries are expected to be severely impacted by climate change. 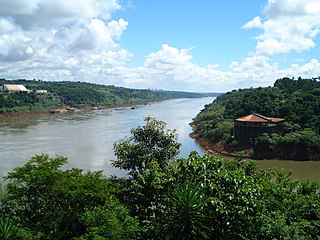 Throughout its history, agriculture in Paraguay has been the mainstay of the economy. This trend has continued today and in the late 1980s the agricultural sector generally accounted for 48 percent of the nation's employment, 23 percent of GDP, and 98 percent of export earnings. The sector comprised a strong food and cash crop base, a large livestock subsector including cattle ranching and beef production, and a vibrant timber industry. 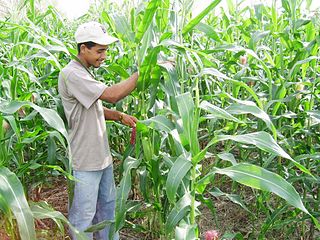 Agriculture in Germany represents only a minor sector of the national economy as the number of employees has rapidly declined since the 19th century Industrialisation period and again, drastically during the 20th century. By 1989 agriculture amounted to only 1.6 percent of the West German GDP. Although the percentage of the agricultural sector of the East German GDP was twice as high, its total proportion of the reunited Germany's GDP amounted to only about two percent. Despite the sector's relatively small work force, that continues to decline in the 21st century and the mere 0.9 percent value share in the national GDP (2007), its use of more than half of the country's surface area, its impact on the environment and its fundamental connection to health issues, makes it politically very important. As one of the four largest producers in the European Union, large scale outdoor vegetable cultivation, such as potatoes and cereals accounts for the highest output.

Poland's agricultural sector is vital for European and Global market because is produces a variety of agricultural, horticultural and animal origin products. The surface area of agricultural land in Poland is 15.4 million ha, which constitutes nearly 50% of the total area of the country.

Agriculture in Suriname is the third largest industry in Suriname, in the economy, employing between 9-15% percent of the workforce, and account for 9% of GDP. Agriculture accounts for 40% of carbon emissions in Suriname, and is an important part of Suriname's policies as part of its Nationally Determined Contributions.