Alf John Hansen (born 13 July 1948) is a retired rower from Norway. Early in his career, he received two Norwegian sport awards shared with his brother Frank. Towards the end of his career in 1990, he was the inaugural recipient of the Thomas Keller Medal, the highest honour in rowing. His international rowing career spanned more than two decades.

At the 1986 World Rowing Championships, Hansen and Thorsen were both part of the Norwegian quad scull team that came ninth; their team members were Vetle Vinje and Lars Bjønness. [6] At the 1987 World Rowing Championships, the same team won a silver medal. [7] The four stayed together and competed at the 1988 Summer Olympics in Seoul where they won Olympic silver. [2]

The Hansen brothers were awarded the Aftenposten Gold Medal after their world championship win in 1975; it is one of the highest awards that are awarded within Norwegian sport. [9] After their 1976 Olympic gold, the Hansen brothers were awarded the Fearnley award. [10] In 1990, Alf Hansen was the inaugural recipient of the Thomas Keller Medal. The medal is given by the International Rowing Federation (FISA) for an outstanding international career in the sport of rowing as well as exemplary sportsmanship. It is the highest honour in rowing. [11]

Thomas Lange is a German rower who won two gold and one bronze Olympic medals in the single sculls.

Allan Whitwell is a male former rower who competed for Great Britain and England.

Agostino Abbagnale is an Italian rower and triple Olympic gold medalist. He is the younger brother of multiple Olympic medalists Carmine Abbagnale and Giuseppe Abbagnale.

Jana Sorgers is a German rower who was a dominant sculler of her time, starting her career for the East German rowing team and continuing after the German reunification for the combined Germany for a few more years. Between 1986 and 1996, she won two Olympic gold medals, seven world championship titles, and nine national titles. Upon the conclusion of her successful career, she was awarded the Thomas Keller Medal by the International Rowing Federation (FISA) – the highest honour in rowing.

Rüdiger Reiche is a retired German rower and a 1976 Olympic champion in the quadruple sculls. Between 1974 and 1985 he won eight medals in single, double and quadruple scull events at the world championships, including two gold medals. After retiring from competitions he worked as a rowing coach at the club and national levels, training Daniel Haudoerfer and Hubert Trzybinski. 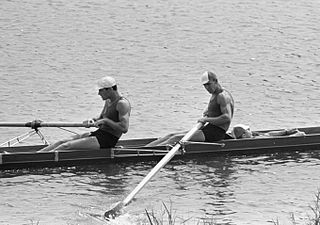 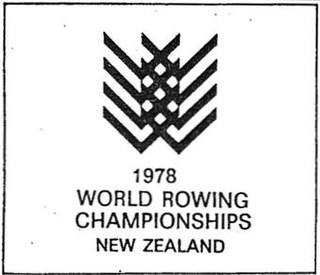 Eve Macfarlane is a New Zealand rower. Described as a "natural rower", she went to the 2009 World Rowing Junior Championships within a few months of having taken up rowing and won a silver medal. She represented New Zealand at the 2012 Summer Olympics in London as the country's youngest Olympian at those games. She was the 2015 world champion in the women's double sculls with Zoe Stevenson. At the 2016 Summer Olympics, they came fourth in the semi-finals and thus missed the A final.

Irina Ivanovna Fetisova is a retired Soviet swimmer and rower. 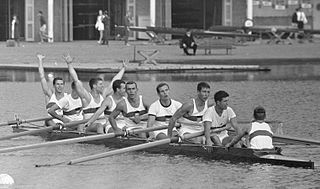 Boris Fyodorov is a Soviet rower. He had a long career, having won international medals between the ages of 22 and 35.

The 1951 European Rowing Championships were rowing championships held on the Mâcon regatta course on the Saône in Mâcon, France. Men competed in all seven Olympic boat classes. The regatta is notable as the first test event for international women's rowing organised by the International Rowing Federation (FISA), with four countries competing in four boat classes over the shorter race distance of 1,000 m. The purpose of the test event was to see whether women's rowing should formally become part of the FISA-organised European Rowing Championships.