The American Legion, commonly known as the Legion, is a non-profit organization of U.S. war veterans headquartered in Indianapolis, Indiana. It is made up of state, U.S. territory, and overseas departments, and these are in turn made up of local posts. The organization was formed on March 15, 1919, in Paris, France, by a thousand officers and men of the American Expeditionary Forces (A. E. F.), [1] and it was chartered on September 16, 1919, by the United States Congress. [2]

The Legion played the leading role in the drafting and passing of the Servicemen's Readjustment Act of 1944, commonly known as the "G.I. Bill". In addition to organizing commemorative events, members provide assistance at Department of Veterans Affairs (VA) hospitals and clinics. It is active in issue-oriented U.S. politics. Its primary political activity is lobbying on behalf of interests of veterans and service members, including support for benefits such as pensions and the Veterans Health Administration. [3] It has also historically promoted Americanism, individual obligation to the community, state, and nation; peace and good will. [4]

The American Legion was established on March 15, 1919, in Paris, France, by delegates to a caucus meeting from units of the American Expeditionary Forces (A. E. F.), which adopted a tentative constitution. The action of the Paris Caucus was confirmed and endorsed by a similar meeting held in St. Louis, Missouri, from May 8 to 10, 1919, when the Legion was formally recognized by the troops who served in the United States. The Paris Caucus appointed an Executive Committee of seventeen officers and men to represent the troops in France in the conduct of the Legion. The St. Louis caucus appointed a similar Committee of Seventeen. These two national executive committees amalgamated and were the initial governing body of the Legion. The temporary headquarters was located in New York. [5]

The men who initiated the formation of the Legion: [6]

The World War I Victory Button on a narrow circular band of blue enamel, containing the words "American Legion" in gold letters, forms the central element of the American Legion Emblem. [8] The Legion emblem or "button" was officially adopted by the National Executive Committee of The American Legion on July 9, 1919. [9]

Membership in The American Legion was originally restricted to soldiers, sailors, and marines who served honorably between April 6, 1917, and November 11, 1918. [10] Eligibility has since been expanded to include personnel who served on active duty in the Armed Forces of the United States or armed forces associated with the U.S., [11] between December 7, 1941, through a date of cessation of hostilities as determined by the federal government, and was an American citizen when they entered that service or continues to serve honorably. [12] U.S. Merchant Marines who served between December 7, 1941, and December 31, 1946, are also eligible. [13] Honorary, associate, social, or guest memberships in the Legion are not permitted. Members must be eligible through the nature and timing of their military service. [14]

The following is a list of eligibility dates used by The American Legion to determine membership eligibility. [11] [12]

See also: List of notable members of the American Legion

Notable members of The American Legion have included: 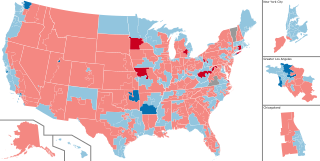 The 2000 United States House of Representatives elections on November 7, 2000 coincided with the election of George W. Bush as President of the United States. The Republican Party won 221 seats, while the Democratic Party won 212 and independents won two.

The 1986 United States House of Representatives elections was held on November 4, 1986, in the middle of President Ronald Reagan's second term in office, while he was still relatively popular with the American public. As in most mid-term elections, the President's party — in this case, the Republican Party — lost seats, with the Democratic Party gaining a net of five seats and cementing its majority. These results were not as dramatic as those in the Senate, where the Republicans lost control of the chamber to the Democrats. 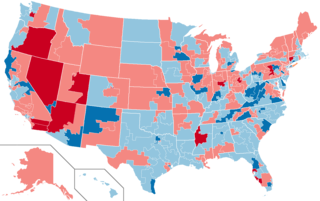 The 1982 United States House of Representatives elections was an election for the United States House of Representatives held on November 2, 1982, in the middle of President Ronald Reagan's first term, whose popularity was sinking due to economic conditions under the 1982 recession. The President's Republican Party lost seats in the House, which could be viewed as a response to the President's approval at the time. Unlike most midterm election cycles, the number of seats lost—26 seats to the Democratic Party—was a comparatively large swap. It included most of the seats that had been gained the previous election, cementing the Democratic majority. Coincidentally, the number of seats the Democrats picked up (26), was the exact amount the Republicans would have needed to win the House majority. It was the first election held after the 1980 United States redistricting cycle. 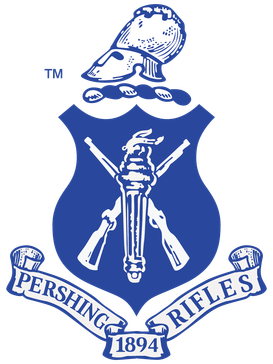 The National Society of Pershing Rifles is a military-oriented honor society for college-level students founded in 1894 as a drill unit at the University of Nebraska–Lincoln. It is the oldest continuously operating US college organization dedicated to military drill. Originally named Varsity Rifles, members renamed the organization in honor of their mentor and patron, Lieutenant John J. Pershing, upon his departure from the university in 1895.

John Charles Black was a Democratic U.S. Congressman from Illinois. He received the Medal of Honor for his actions as a Union Army lieutenant colonel and regimental commander at the Battle of Prairie Grove during the American Civil War.

The American Civil War bibliography comprises books that deal in large part with the American Civil War. There are over 60,000 books on the war, with more appearing each month. Authors James Lincoln Collier and Christopher Collier stated in 2012, "No event in American history has been so thoroughly studied, not merely by historians, but by tens of thousands of other Americans who have made the war their hobby. Perhaps a hundred thousand books have been published about the Civil War."

The Horse Artillery Brigade of the Army of the Potomac was a brigade of various batteries of horse artillery during the American Civil War.

Charles Sawyer Russell was a United States Army officer in the Union Army during the American Civil War.

Events from the year 1795 in the United States.

Franklin D'Olier was an American businessman who served as the first national commander of The American Legion from 1919 to 1920. He was also the great-grandfather of actor Christopher Reeve.

John S. Gleason Jr. was an American banker convicted of fraud in 1977. He previously served as the sixth Administrator of Veterans Affairs, from 1961 to 1965, and the National Commander of The American Legion from 1957 to 1958. He was a decorated World War II veteran, having received the Silver Star Medal, the Legion of Merit, and three Bronze Star Medals. After the war, he served as a senior officer in the United States Army Reserve.

The 41st United States Colored Infantry was an infantry regiment that served in the Union Army during the American Civil War. The regiment was composed almost entirely of African American enlisted men and commanded by white officers. The regiment was authorized by the Bureau of Colored Troops which was created by the United States War Department on May 22, 1863. The regiment engaged in the Siege of Petersburg and Appomattox Campaign and was present at the unconditional surrender of Confederate General Robert E. Lee and the Army of Northern Virginia at Appomattox Court House on April 9, 1865. 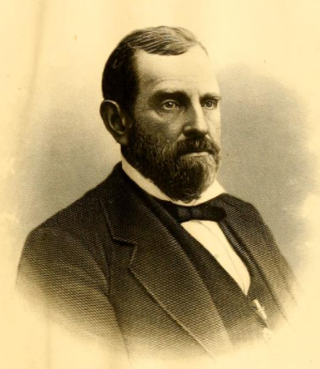 John Love was a United States Army officer during and after the Mexican-American War, a railroad contractor, an officer in the Union Army during the American Civil War and a major general in the Indiana Legion, also referred to as the Indiana militia or home guard or state defense force, during the American Civil War. After resigning on January 1, 1863, he was called back into service in July 1863 and commanded an Indiana militia force which pursued Confederate Brigadier General John Hunt Morgan's raiders in Indiana. On July 11, 1863, about 100 militia men held off Morgan's raiders at Vernon, Indiana, forcing them to withdraw when Love arrived with reinforcements arrived. After his service he was a real estate broker and representative of the Gatling Gun Company in Europe. In 1880, Congress appointed Love to be a manager of the National Home for Disabled Volunteer Soldiers.