Bills of credit are documents similar to banknotes issued by a government that represent a government's indebtedness to the holder. They are typically designed to circulate as currency or currency substitutes. [1] Bills of credit are mentioned in Article One, Section 10, Clause One (also known as the Contract Clause) of the United States Constitution, where their issuance by state governments is prohibited.

British colonies in North America would issue bills of credit in order to deal with fiscal crises, although doing so without receiving them as revenue in like amounts would increase the money supply, resulting in price inflation and a drop in value relative to the pound sterling. The documents would circulate as if they were currency, and colonial governments would accept them as payment for debts like taxes. They were not always considered legal tender for private debts.

Colonial decisions on the issuance of bills of credit were also frequently the subject of disputes between differing factions within the colony, and with royally appointed governors. Between 1690 and 1750 the matter was regularly debated in the Province of Massachusetts Bay, where merchants and lenders stood to lose value when new bills were issued, and borrowers stood to gain, because they could repay their debts with depreciated bills. The Massachusetts bills were finally retired in 1749 when the province received a large payment in coin for its financial contributions to the 1745 Siege of Louisbourg. The Province of New Jersey issued bills of credit beginning in the 1710s, but successfully managed to avoid significant inflationary effects. [2]

Insertion in the United States Constitution

Article I, Section 10, Clause 1 prohibits the states from issuing Bills of Credit. The prohibition of states issuing Bills of Credit came in direct response to how states managed their financial policy during the era of the Articles of Confederation. While all states in theory recognized the American Continental as their official currency, in reality, nearly every state issued its own Bills of credit, which further devalued the Continental and led to its eventual collapse as a currency.

The painful experience of the runaway inflation and collapse of the Continental dollar prompted the delegates to the Constitutional Convention to include the Contract Clause into the United States Constitution, so that the individual states could not issue bills of credit or "make any Thing but gold and silver Coin a Tender in Payment of Debts." [3] This restriction of bills of credit was extended to the Federal government, as the power to "emit bills" from the Articles of Confederation was abolished, leaving Congress with the power "to borrow money on credit." [4]

The United States Government has, at numerous times throughout American History, issued Bills of Credit to utilize in place of paper currency. Most instances of this have occurred during wartime.

During the American Revolutionary War the Continental Congress frequently issued bills of credit referred to as Continentals. Because of inflation they rapidly declined in value, leading to the unfavorable comparison that something was "not worth a Continental".

Interest-bearing notes are a grouping of Civil War-era bills of credit-related emissions of the US Treasury. The grouping includes the one- and two-year notes authorized by the Act of March 3, 1863, which bore interest at five percent annually, were a legal tender at face value, and were issued in denominations of $10, $20, $50, $100, $500 and $1000. [6]

Compound interest treasury notes were emissions of the United States Treasury Department authorized in 1863 and 1864 with aspects of both paper money and debt. They were issued in denominations of $10, $20, $50, $100, $500 and $1000. While they were legal tender at face value, they were redeemable after three years with six percent annual interest compounded semi-annually. [7]

In the absence of efficient investment banks, the hybrid nature of these instruments allowed the government to directly distribute debt by paying the notes out to creditors as legal tender, and then relying on interest-seeking parties to eventually remove them from circulation in order to redeem them with interest at maturity. [8]

Legal writers, as opposed to economic historians, incorrectly assume that the constitutional phrase "Bills of Credit" was simply a synonym for paper money, but it refers to only one, though a very important, type of paper currency. [10] The Constitution explicitly prohibits the states from issuing bills of credit and coining money. States are only permitted to make gold and silver coin legal tender.

A currency in the most specific sense is money in any form when in use or circulation as a medium of exchange, especially circulating banknotes and coins. A more general definition is that a currency is a system of money in common use, especially for people in a nation. Under this definition, U.S. dollars (US$), euros (€), Indian rupee (₹), Japanese yen (¥), and pounds sterling (£) are examples of currencies. Currencies may act as stores of value and be traded between nations in foreign exchange markets, which determine the relative values of the different currencies. Currencies in this sense are defined by governments, and each type has limited boundaries of acceptance. 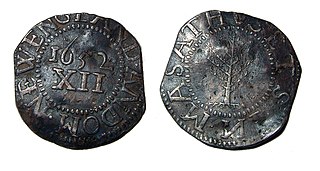 Early American currency went through several stages of development during the colonial and post-Revolutionary history of the United States. John Hull was authorized by the Massachusetts legislature to make the earliest coinage of the colony, the willow, the oak, and the pine tree shilling in 1652.

Compound interest treasury notes were emissions of the United States Treasury Department authorized in 1863 and 1864 with aspects of both paper money and debt. They were issued in denominations of $10, $20, $50, $100, $500 and $1000. While they were legal tender at face value, they were redeemable after three years with six percent annual interest compounded semi-annually. In the absence of efficient investment banks, the hybrid nature of these instruments allowed the government to directly distribute debt by paying the notes out to creditors as legal tender, and then relying on interest-seeking parties to eventually remove them from circulation in order to redeem them with interest at maturity. Thus, in theory, the notes did not contribute to monetary inflation as did the greenbacks.

Juilliard v. Greenman, 110 U.S. 421 (1884), was a Supreme Court of the United States case in which issuance of greenbacks as legal tender in peacetime was challenged. The Legal Tender Acts of 1862 and 1863 were upheld.

A Treasury Note is a type of short term debt instrument issued by the United States prior to the creation of the Federal Reserve System in 1913. Without the alternatives offered by a federal paper money or a central bank, the U.S. government relied on these instruments for funding during periods of financial stress such as the War of 1812, the Panic of 1837, and the American Civil War. While the Treasury Notes, as issued, were neither legal tender nor representative money, some issues were used as money in lieu of an official federal paper money. However the motivation behind their issuance was always funding federal expenditures rather than the provision of a circulating medium. These notes typically were hand-signed, of large denomination, of large dimension, bore interest, were payable to the order of the owner, and matured in no more than three years – though some issues lacked one or more of these properties. Often they were receivable at face value by the government in payment of taxes and for purchases of publicly owned land, and thus "might to some extent be regarded as paper money." On many issues the interest rate was chosen to make interest calculations particularly easy, paying either 1, 11⁄2, or 2 cents per day on a $100 note.