Biosphere Preserves are created on the base of nature preserves or national parks including to their composition territories and objects of other categories of nature-preserving fund and other lands as well as including in the established order the World Network of Biosphere Reserves in the UNESCO framework "Man and the Biosphere Programme".

The focal point in Poland for the Biosphere Reserves is the Polish Academy of Sciences (PAS), Institute of Geography and Spatial Organisation.

There are currently ten such reserves in Poland, including trans-boundary reserves shared between Poland and neighboring countries. [1]

The reserve is located on the border with Slovakia in the Western Beskidy Mountains. Babia Góra is the second highest massif (1,725 m (5,659 ft)) in Poland and forms part of the watershed boundary between the Baltic Sea and the Black Sea basins. There are four environments that occur as the altitude increases. The forest belt is divided into a lower belt (up to 1,150 m (3,770 ft)), consisting of forests of European beech (Fagus sylvatica), silver fir ( Abies alba ) and Carpathian spruce (Picea abies), and the upper belt (up to 1,390 m (4,560 ft)) consisting of Carpathian spruce forest. Above the forest is the subalpine belt (up to 1,650 m (5,410 ft)) with dwarf mountain pine (Pinetum mughi) and low-growth European blueberry ( Vaccinium myrtillus ). At the highest slopes is the alpine grassland belt (up to 1,725 m (5,659 ft)) consisting of lichen-covered siliceous bedrock with tussock-based grasses like (Festuca supina) and (Avenella flexuosa). [1] [2]

The reserve is a glacial lake typical of those located in the Masurian Lake District with an area of 6.8 square kilometres (2.6 sq mi), and a maximum depth of 3 metres (9.8 ft). The lake is connected with nearby Sniardwy Lake by a channel. The site is a breeding ground for water birds such as grebes, water rail (Rallus aquaticus), moorhen, grey heron (Ardea cinerea), bearded reedling (Panurus biarmicus), white-tailed eagle (Haliaeetus albicilla), osprey (Pandion haliaetus), red kite, great cormorant and black tern (Chlidonias niger). The lake has been a protected location since 1937 as a habitat of the mute swan (Cygnus olor), as every year there are a dozen to tens of dozens of nesting pairs, and during moulting they arrive in numbers reaching up to 2,000 birds. [3] [4] [5] [1]

The reserve consists of set of dunes, brackish lakes, bogs, and wetland forests on the southern Baltic Sea coast between Łeba and Rowy, Poland. [5] The coastal aeolian processes have produced some of the most extensive and active mobile sand dunes, which can reach 30 m (98 ft) high, on the Baltic Sea. Coastal erosion and other geological processes lead to the creation of sand-bars, forming brackish lakes and bogs. The area consists of a series of vegetation zones going from the sand communities of the coastline towards the forests of the mainland. The forest includes beech (Fagus sylvatica), birch (Betula pubescens), alder (Alnus glutinosa), pine and oak. It is an important way station for migrating waderbirds and waterbirds such as geese, ducks and swans. The white-tailed eagle (Haliaeetus albicilla) and other birds nest at the site. [3] [4] [1]

The reserve is located in the Bieszczady Mountains on the border with Slovakia and Ukraine. There are four distinct altitude-dependent vegetation ecosystems in the mountains starting with beech forest (Fagetum sylvaticae), followed by mixed forests of beech and silver fir ( Abies alba ), forested areas of green alder (Alnetum viridis), and finally a belt of treeless poloniny, a subalpine meadows dominated by grasses. Over 100 species of birds live in the area such as the black stork (Ciconia nigra) and the golden eagle (Aquila chrysaetos). [2] [1]

The reserve is located on the North European Plain, north-east of Warsaw, parallel to the Vistula River and is characterized by a high diversity of lowland habitats with dune belts separated by swamp areas and a mixture of forest types. The forests are principally composed of a mixture of grey willow ( Salix cinerea ), European hornbeam ( Carpinus betulus ), arctic dwarf birch (Betula humilis) English oak ( Quercus robur ), small-leaved lime ( Tilia cordata ) and Scots pine (Pinus sylvestris). [5] [1]

The reserve is part of the Western Sudetes mountains stretching from south-central Poland along the northern border of the Czech Republic to eastern Germany. The mountains are located at the watershed dividing the Baltic Sea and North Sea basins. [5] The area is known for its high biodiversity in four altitudinal vegetation belts, from submontane to alpine. The river valleys and lower layers form the sub-montane zone made up of forests of European beech (Fagus sylvatica), silver fir ( Abies alba ) and Carpathian spruce (Picea Abies). The higher parts form the montane vegetation zone characterized by forested areas of Carpathian spruce (Picea Abies). Above 1,250 to 1,350 m (4,100 to 4,430 ft) is the subalpine zone, which is marked by dwarf mountain pine (Pinus mugo), mat-grass meadows and subarctic highmoors. There are three subapline bogs that support an extensive algal community important for migratory birds and raptors. [4] The alpine vegetation zone, is characterized by large rocky deserts with herbaceous perennials such as Carici (rigidae)-Nardetum and Festucetum supinae. [5] [1] [2]

The reserve covers areas on each side of the border between Poland and Slovakia. The area contains a number of natural features such as a dwarf pine belt, alpine meadows, lakes and rocky peaks. The area consists of temperate broadleaf forests or woodlands made up of mixed beech (Fagus sylvatica) forest with fir (Abies alba) and sycamore (Acer pseudoplatanus). Higher up in the mountains this transitions to forests of silver fir ( Abies alba ) and Carpathian spruce (Picea Abies) until the timber line (1,500 to 1,550 m (4,920 to 5,090 ft)). Above the forest is the subalpine zone (1,550 to 1,850 m (5,090 to 6,070 ft)) with dwarf mountain pine (Pinetum mughi), Sorbus aucuparia and Betula carpatica. The alpine zone consists of grasses and low-growth herbaceous groundcover. [2] [1]

The reserve comprises a vast open lowland landscape with a mosaic of swamps, moors, lakes, rivers and forests located between the basins of the Bug and Wieprz rivers. The site is part of the European Ecological Corridor of the Bug River. [5] The location supports bird species including raptors such as lesser spotted eagle (Aquila pomarina), hen harrier (Circus cyaneus) and Montagu's harrier (Circus pygargus) and birds such as aquatic warbler (Acrocephalus paludicola), marsh sandpiper (Tringa stagnatilis) and Eurasian cranes ( Grus grus ). The area is considered to be an important crossing point for migratory birds. The north-south flyways and east-west flyways of birds meet in the region. The areas consists of boreal Scots pine (Pinus sylvestris) forests, black alder (Alnus glutinosa) wetland forests, meadows and peatbog (raised bog, transitional bog and fen) ecosystems. [1] [4] [3]

The reserve covers one of the largest forests in Poland, containing mainly Scots pine (Pinus sylvestris). The landforms of the area were sculpted by a glacier that retreated at the end of the last glacial age creating characteristically long ribbon lakes. Additionally there are large clusters of inland sand dunes. There are extensive areas of peat bogs formed as a result of the overgrowing of the shallower lakes. A number of species of birds live in the area such as the black stork (Ciconia nigra), black grouse (Tetrao tetrix), wood grouse (Tetrao urogallus) and peregrine falcon (Falco peregrinus). [1] [6]

The Sister Mary Grace Burns Arboretum, on the campus of Georgian Court University, in Lakewood Township, New Jersey, United States, was once the landscaped park for the winter home of George Jay Gould, millionaire son of railroad tycoon Jay Gould.

The New Canaan Nature Center is a botanical garden, arboretum and nature preserve located at 144 Oenoke Ridge, Route 124, about .25 miles (0.40 km) north of the center of New Canaan, Connecticut. 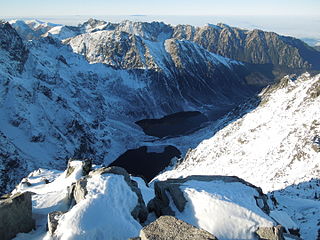 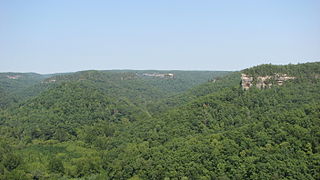 The New England-Acadian forests are a temperate broadleaf and mixed forest ecoregion in North America that includes a variety of habitats on the hills, mountains and plateaus of New England in the Northeastern United States and Quebec and the Maritime Provinces of Eastern Canada. 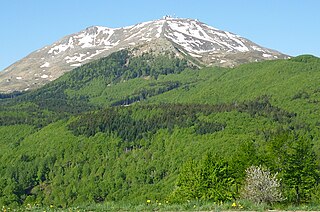 The Apennine deciduous montane forests are a temperate broadleaf and mixed forests ecoregion in the Apennine Mountains of Italy. The development of these forests is ensured by the high rainfall in the Apennines, combined with a temperate-cool climate. Because of climate change, the presence of silver fir, although still widespread, has been dramatically reduced in favour of beech. 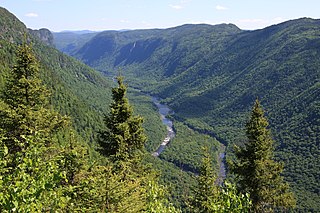 The eastern forest–boreal transition is a temperate broadleaf and mixed forests ecoregion of North America, mostly in eastern Canada. It is a transitional zone or region between the predominantly coniferous Boreal Forest and the mostly deciduous broadleaf forest region further south.

Mount Stogu is a protected area situated in the administrative territory of Băile Olăneşti, in Vâlcea County within east Romania.

The Buila-Vânturarița National Park is a protected area situated in Romania, in the central-northern part of Vâlcea County, in administrative territory of localities Costeşti, Bărbăteşti and Băile Olăneşti.

The Dleskovec Plateau, probably named after Mount Dleskovec in its central part, rarely also named the Vestibule, is a karstified mountain plateau in the eastern part of the Kamnik–Savinja Alps in northern Slovenia. It lies between the Roban Valley, the Upper Savinja Valley, and the Lučka Bela Valley, to the southeast of Mount Ojstrica and to the northeast of the Big Pasture Plateau. It is oriented in the direction from the southeast to the northwest. It covers an area of about 25 square kilometres (9.7 sq mi) and is partly overgrown by forest and Mountain Pine. The highest point of the plateau is Mount Big Peak, also located in its central part. Administratively, the Dleskovec Plateau belongs to the settlement of Podveža in the Municipality of Luče. 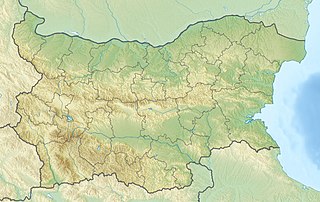 The Vessertal-Thüringen Forest forms a central part of the much larger Thuringian forest.

Bayuvi Dupki–Dzhindzhiritsa, also spelled Doupki–Djindjiritza, is a nature reserve in Pirin National Park, located in the homonymous mountain range in south-western Bulgaria. It is situated in Razlog Municipality, Blagoevgrad Province. Bayuvi Dupki–Dzhindzhiritsa is among the nation's oldest reserves, declared in 1934 to protect the forests of Macedonian pine and Bosnian pine, both Balkan endemic species. Its territory was further expanded in 1976 and 1980 and spans an area of 2873 ha or 28,73 km2. It was declared a UNESCO Biosphere Reserve in 1977. The reserve encompasses territory between 1200 and 2907 m altitude. Geologically it is dominated by Proterozoic marbles and has extensive karst terrain with numerous caves and karst formations.

Ali Botush, also spelled Alibotoush, is a nature reserve in the small mountain range of Slavyanka, located on the border between Bulgaria and Greece. The reserve occupies the northern section of the mountain which lies within the territory of Bulgaria and takes its name from the old name of Slavyanka. It is situated in the municipalities of Sandanski and Hadzhidimovo, Blagoevgrad Province. It was declared in 1951 to protect the largest forests of the endemic Bosnian pine in the Balkan Peninsula. Its territory was further expanded several times and spans an area of 1638 ha or 16,38 km2. It was declared a UNESCO Biosphere Reserve in 1977. 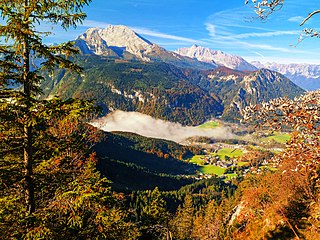