Black sand is sand that is black in color. One type of black sand is a heavy, glossy, partly magnetic mixture of usually fine sands containing minerals such as magnetite, found as part of a placer deposit. Another type of black sand, found on beaches near a volcano, consists of tiny fragments of basalt.

While some beaches are predominantly made of black sand, even other color beaches (e.g. gold and white) can often have deposits of black sand, particularly after storms. Larger waves can sort out sand grains leaving deposits of heavy minerals visible on the surface of erosion escarpments.

Black sands are used by miners and prospectors to indicate the presence of a placer formation. Placer mining activities produce a concentrate that is composed mostly of black sand. Black sand concentrates often contain additional valuables, other than precious metals: rare earth elements, thorium, titanium, tungsten, zirconium and others are often fractionated during igneous processes into a common mineral-suite that becomes black sands after weathering and erosion.

Several gemstones, such as garnet, topaz, ruby, sapphire, and diamond are found in placers and in the course of placer mining, and sands of these gems are found in black sands and concentrates. Purple or ruby-colored garnet sand often forms a showy surface dressing on ocean beach placers.

An example of a non-volcanic black sand beach is at Langkawi in Malaysia. [1]

When lava contacts water, it cools rapidly and shatters into sand and fragmented debris of various size. Much of the debris is small enough to be considered sand. A large lava flow entering an ocean may produce enough basalt fragments to build a new black sand beach almost overnight. The famous "black sand" beaches of Hawaii, such as Punaluʻu Beach and Kehena Beach, were created virtually instantaneously by the violent interaction between hot lava and sea water. [2] Since a black sand beach is made by a lava flow in a one time event, they tend to be rather short lived since sands do not get replenished if currents or storms wash sand into deeper water. For this reason, the state of Hawaii has made it illegal to remove black sand from its beaches. Further, a black sand beach is vulnerable to being inundated by future lava flows, as was the case for Hawaiʻi's Kaimū, usually known simply as Black Sand Beach, and Kalapana beaches. [3] An even shorter-lived black sand beach was Kamoamoa. [4] Unlike with white and green sand beaches, walking barefoot on black sand can result in burns, as the black sand absorbs more solar radiation. [5] 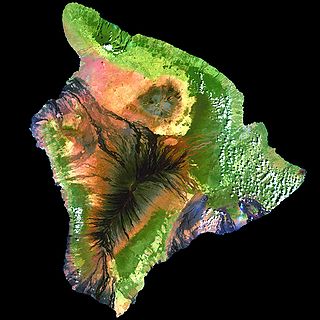 Hawaii is the largest island in the United States, located in the state of Hawaii. It is the southeasternmost of the Hawaiian Islands, a chain of volcanic islands in the North Pacific Ocean. With an area of 4,028 square miles (10,430 km2), it has 63% of the Hawaiian archipelago's combined landmass. However, it has only 13% of Hawaiʻi's population. The island of Hawaiʻi is the third largest island in Polynesia, behind the two main islands of New Zealand.

In geology, a placer deposit or placer is an accumulation of valuable minerals formed by gravity separation from a specific source rock during sedimentary processes. The name is from the Spanish word placer, meaning "alluvial sand". Placer mining is an important source of gold, and was the main technique used in the early years of many gold rushes, including the California Gold Rush. Types of placer deposits include alluvium, eluvium, beach placers, aeolian placers and paleo-placers.

Kaimū was a small town in the Puna District on Island of Hawaiʻi that was completely destroyed by an eruptive flow of lava from the Kūpaʻianahā vent of the Kīlauea volcano in 1990. In Hawaiian, kai mū means "gathering [at the] sea" as to watch surfing. The lava flow that destroyed Kaimū and nearby Kalapana erupted from the southeast rift zone of Kīlauea. 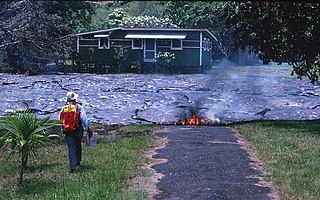 Kalapana is a town and a region in the Puna District on the Island of Hawaiʻi in the Hawaiian Islands. The town was the original location of the Star of the Sea Painted Church.

Kalapana is an American pop-rock band from Honolulu, Hawaii. They are known for their songs “Naturally” and “The Hurt”.

Punaluʻu Beach is a beach between Pāhala and Nāʻālehu on the Big Island of the U.S. state of Hawaii. The beach has black sand made of basalt and created by lava flowing into the ocean which explodes as it reaches the ocean and cools. This volcanic activity is in the Hawaiʻi Volcanoes National Park. Punaluʻu is frequented by endangered hawksbill and green turtles, which can often be seen basking on the black sand.

Puʻu ʻŌʻō is a volcanic cone on the eastern rift zone of Kīlauea volcano in the Hawaiian Islands. The eruption that created Puʻu ʻŌʻō began on January 3, 1983, and continued nearly continuously until April 30, 2018, making it the longest-lived rift-zone eruption of the last two centuries.

Puna is one of the 9 districts of Hawaii County on the Island of Hawaiʻi. It is located on the windward side of the island and shares borders with South Hilo district in the north and Kaʻū district in the west. With a size of just under 320,000 acres (1,300 km2) or 500 sq. miles. Puna is slightly smaller than the island of Kauaʻi. 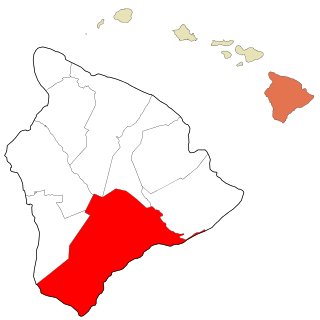 Kaʻū is the southernmost and largest district of Hawaii County, Hawaii, located on the island of Hawaiʻi.

Papakōlea Beach is a green sand beach located near South Point, in the Kaʻū district of the island of Hawaiʻi. It is one of only four green sand beaches in the world, the others being Talofofo Beach, Guam; Punta Cormorant on Floreana Island in the Galapagos Islands; and Hornindalsvatnet, Norway. It gets its distinctive coloring from olivine sand eroded out of the enclosing volcanic cone.

Heavy mineral sands are a class of ore deposit which is an important source of zirconium, titanium, thorium, tungsten, rare-earth elements, the industrial minerals diamond, sapphire, garnet, and occasionally precious metals or gemstones. 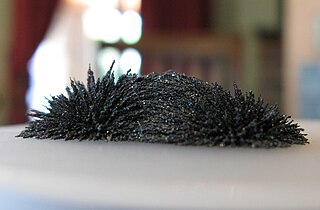 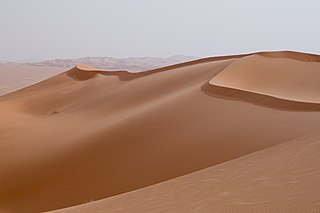 Isaac Hale Beach Park [Hale is a Hawaiian surname, pronounced HAH-leh], also known as Pohoiki, is an oceanfront park, boat launch and surf location on Pohoiki Bay in the Puna district of the Big Island of Hawaii. It was one of only a few places on the southeastern shore of Hawaii that allows for such facilities. Pohoiki Bay is known for its strong currents and large waves, and although the park used to be known for good snorkeling, the 2018 lower Puna eruption covered most of the coral and safer swimming area. The park was expanded and modernized in 2006.

Kehena Beach is a narrow black sand beach located on the east shore of the island of Hawaii, in the Puna district. Spinner dolphins frequent the water; as a result, the beach has also been known as Dolphin Beach.

Route 130 is a state highway in Hawaii County, Hawaii, United States. It runs from Route 11 at Ke'aau through the Puna District to Kaimū.

Route 137 is a state highway in Hawaii County, Hawaii. The highway, known as the Kapoho-Kalapana Road, the Beach Road, or the Red Road, travels along the eastern coast of the island of Hawaii between Kalapana and Kapoho. It passes near Kīlauea and its lava fields, as well as Isaac Hale Beach Park and other protected areas.

Arthur Johnsen was an American artist. Born and raised on Oahu and living most of his post-university life on the Big Island of Hawaii, he is known for his impressionistic paintings and murals of Hawaiiana.

Wikimedia Commons has media related to Black sand .
This page is based on this Wikipedia article
Text is available under the CC BY-SA 4.0 license; additional terms may apply.
Images, videos and audio are available under their respective licenses.