Last updated April 13, 2021
This article is about the coastal region in California. For other uses, see Lost Coast (disambiguation).
Region of California in the United States

The Lost Coast is a mostly natural and undeveloped area of the California North Coast in Humboldt and Mendocino Counties, which includes the King Range. It was named the "Lost Coast" after the area experienced depopulation in the 1930s. [1] In addition, the steepness and related geotechnical challenges of the coastal mountains made this stretch of coastline too costly for state highway or county road builders to establish routes through the area, leaving it the most undeveloped and remote portion of the California coast. [2] Without any major highways, communities in the Lost Coast region such as Petrolia, Shelter Cove, and Whitethorn are isolated from the rest of California.

The region lies roughly between Rockport and Ferndale. At the south end, State Route 1, which runs very close along the coast for most of its length, suddenly turns inland at Rockport before merging with U.S. Route 101 at Leggett. At the north end, State Route 211 begins its journey at Ferndale, heading towards Highway 101 in Fernbridge. Section 511 of the California Streets and Highways Code still says that "Route 211 is from Route 1 near Rockport to Route 101 near Fernbridge", but it is unlikely that the portion south of Ferndale will be built. Most of the region's coastline is now part of either Sinkyone Wilderness State Park or King Range National Conservation Area.

The Lost Coast consists of undivided Cretaceous marine metasedimentary and sedimentary rocks of the North American Plate steeply uplifted by Mendocino Triple Junction interactions with the Pacific Plate and Gorda Plate. The Lost Coast includes Tertiary marine sedimentary formations north of the Mattole River and a portion of the Franciscan Assemblage called Point Delgada at Shelter Cove. [3] The steepness of uplift has created a coastal ridge forming a drainage divide parallel to the coast. The drainage pattern between Usal Creek and the Mattole River is a series of short streams with steep channel gradients. [4]

Like the surrounding coast, the Lost Coast experiences a wet season and a dry season. The wet season ranges from October to April. The King Range mountains collect significant moisture from storms coming in from the Pacific Ocean, making it one of the wettest sections of the California coastline. Local weather stations typically record over 100 in (2,500 mm) annually of rainfall, and during wet years, over 200 in (5,100 mm) can fall along the Lost Coast. Snow can blanket the higher peaks after storms, but will melt quickly.

From May to September, the mountain areas are mostly warm and dry with temperatures reaching 80–90 °F in mid-summer, but the weather is still highly variable, with some days of fog and light rain. [5]

Because of the rugged and remote location, the small towns of Shelter Cove, Whitethorn and Petrolia are popular with those looking for quiet respite. The area is known for its black sand beaches, which get their color from dark colored sandstone called greywacke and an older compressed shale produced by tectonic activity of one continental and two oceanic plates meeting just offshore. [6]

Early European settlers of this area began harvesting bark of the tanoak tree for tanning hides into leather. Bark collectors formed the small community of Kenny around springs at the headwaters of the north fork of Usal Creek. A wharf was built at Bear Harbor in 1884 for loading bark onto ships. The Bear Harbor and Eel River Railroad incorporated in 1896 to connect the wharf to a sawmill being built on the South Fork Eel River at Andersonia, California. The location of the railroad shops was named Moody for the proprietor (Louis Alton Moody) of a nearby hotel and saloon. The community of Andersonia, Anderson Gulch, and the Anderson Cliffs of the Lost Coast are named for sawmill owner Henry Neff Anderson, who was killed in a construction accident in 1905. Sawmill and railroad operation languished after Anderson's death, and the facilities were dismantled in 1921. [7]

Usal Redwood Company built a sawmill and 1,600-foot (490 m) wharf at the mouth of Usal Creek in 1889. The company town of Usal was built around the mill and a railroad for transporting logs extended three miles up Usal Creek. A fire in 1902 destroyed the sawmill, schoolhouse, warehouse, and county bridge over Usal Creek. [7] The railroad was dismantled; but a few structures, including a hotel, survived until destroyed by fire in 1969. Steep terrain and unfavorable coastal mooring conditions delayed timber harvesting of Jackass Creek drainage until internal combustion machinery was available for transport. The company town of Wheeler, California, was built for logging operations from 1948 to 1959. Sinkyone Wilderness State Park began acquisition of Lost Coast property in 1975. [8]

The geology of the Lost Coast makes it very difficult to establish routes through the area. State Route 1, California's Pacific Coast Highway, was originally planned to continue up the coast through the region. In 1984, admitting that such construction was not feasible, Caltrans re-routed the northern segment of Highway 1 from Rockport to Leggett and renumbered the portion that was built from Ferndale to Fernbridge as State Route 211.

Without any major highways or county thoroughfares in the area, the secluded communities within the Lost Coast are only accessible by land via small mountain roads. Mattole Road runs south from Ferndale to Petrolia, while Shelter Cove Rd. and Briceland Thorn Rd. form the main route connecting Shelter Cove with US 101 to the east.

Shelter Cove Airport in Shelter Cove is a small public airport with only one runway, making it possible to fly in when weather permits. Communities right on the coast are also accessible by boat.

Ferndale is a city in Humboldt County, California, United States. Its population was 1,371 at the 2010 census, down from 1,382 at the 2000 census. The city contains dozens of well-preserved Victorian storefronts and homes. Ferndale is the northern gateway to California's Lost Coast and the city, which is sited on the edge of a wide plain near the mouth of the Eel River, is also located near the extensive preserves of coast redwood forests.

Honeydew is an unincorporated community in Humboldt County, California. It is located 17 miles (27 km) south of Scotia, at an elevation of 322 feet, 15 miles (24 km) from the Pacific Ocean in the Lost Coast, near the King Range. It has a general store, elementary school, post office, and a few houses nearby. Many of the locals live in the hills surrounding the Mattole valley, named after the Mattole River which runs through the valley. The ZIP code is 95545 and the community is inside area code 707.

State Route 211 is a state highway in the U.S. state of California that connects Ferndale with U.S. 101 in Humboldt County. The highway was originally designed to be the northernmost segment of State Route 1, but after construction of the Coast Highway through the Lost Coast region was abandoned, the route to Ferndale was renumbered to SR 211. 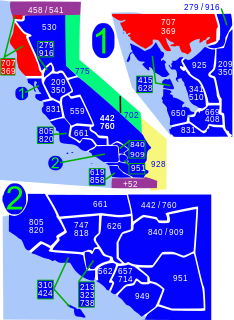 Area code 707 is a telephone area code in the North American Numbering Plan (NANP) for the northwestern part of the U.S. state of California. It was created by a split of area code 415 on March 1, 1959. It serves part of the northern San Francisco Bay Area, as well as the North Coast. Major cities in the area code include Napa, Sebastopol, Vallejo, Benicia, Fairfield, Santa Rosa, Windsor, Healdsburg, Rohnert Park, Petaluma, Fort Bragg, Rio Vista, Crescent City, Eureka, Clearlake, Vacaville, Dixon, and Ukiah.

The Mattole River is a river on the north coast of California, that flows northerly, then westerly into the Pacific Ocean. The vast majority of its 62 miles (100 km) course is through southern Humboldt County, though a short section of the river flows through northern Mendocino County. Communities, from north to south, closely associated with the Mattole River include: Petrolia, Honeydew, Ettersburg, Thorn Junction, and Whitethorn. The river enters the ocean at the Mattole Estuary about 4 miles (6.4 km) west-southwest of Petrolia and 10 miles (16 km) south of Cape Mendocino.

Cape Mendocino Light was a navigation light at Cape Mendocino, California. The former lighthouse was relocated to Shelter Cove near Point Delgada, California in 1998, and the historic Fresnel lens to Ferndale, California, in 1948. An automated beacon operated for a number of years but was removed in May 2013. 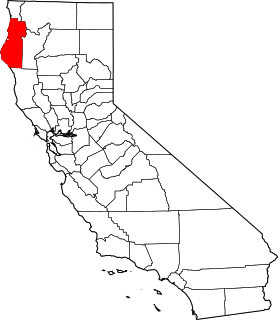 Fernbridge is an unincorporated community at an elevation of 39 feet (12 m) in Humboldt County, California, named for a historic bridge, 3 miles (4.8 km) west-northwest of Fortuna.

Sinkyone Wilderness State Park is a state park in Mendocino County, California. The wilderness area borders the Pacific Ocean to the west and the King Range National Conservation Area to the north. The nearest settlement is the unincorporated town of Leggett. The lack of major road and highway access has led to the Sinkyone Wilderness area being referred to as the Lost Coast. 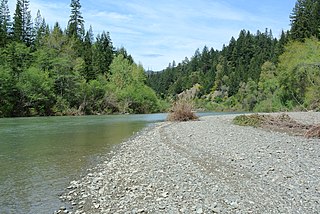 Camp Grant is a ghost town in Humboldt County located on the South Fork Eel River 2 miles (3.2 km) northeast of Weott and 3 miles (4.8 km) east of Dyerville. It was originally settled by Northern Sinkyone people, followed by a Union Army camp and later a logging and railroad support settlement for the construction of the Northwestern Pacific Railroad.

Andersonia is an unincorporated community in Mendocino County, California. It is located near U.S. Route 101 on the South Fork of the Eel River 1 mile (1.6 km) north-northwest of Piercy, at an elevation of 541 feet. 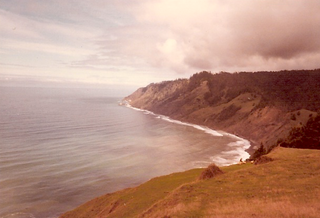