The Gold Country (also known as Mother Lode Country) is a historic region in the northern portion of the U.S. state of California, that is primarily on the western slope of the Sierra Nevada. It is famed for the mineral deposits and gold mines that attracted waves of immigrants, known as the 49ers, during the 1849 California Gold Rush.

When gold was first discovered in 1848 many people came from all over the world to find gold. The migration into California brought diseases and violence. [1] There were 500 mining camps of which 300 are still undiscovered as of today. There was 400 million dollars in gold mined between 1849 and 1855. [2] In 1942 most of the mines shut down due to World War II. [3] The transportation in Gold Country grew rapidly due to the Gold Rush. The first railroad in California ran through Gold Country. [4] There were 250 different stage coach companies formed by 1860. [4]

The Gold Country lies on the western slope of the Sierra Nevada, reaching down to the Sacramento Valley. The oldest geology can be found along the easternmost portions of this region, closer to the Sierra Nevada summits, which formed 100 million years ago. [4] It consists of ancient sea floor and portions of islands which were added onto the western edge of North America during the late Paleozoic, about 275 million years ago. The western sections of the Mother Lode are significantly younger, from the mid-Mesozoic about 150 million years ago, and also consist of material that was solidified on the ocean floor to the continental edge. Massive intrusions of granite forced their way into these formations. After ten miles of overlying material was eroded over the last 70 million years, these intrusions became visible throughout the Sierra Nevada. Over the last 50 million years, rivers and volcanoes deposited materials; these built up in thick layers found atop many of the high ridges of the Sierra Nevada foothills.

This part of California has a Mediterranean climate like much of Italy and Spain, making wine grapes and vineyards one of the region's primary crops and industry.[ citation needed ] Over 100 wineries are found throughout the Gold Country. Winters are cool and wet with occasional snowfall, especially in the higher elevations of the eastern reaches up the slopes of the Sierra Nevada mountains. Winter temperatures range from the upper twenties to mid-fifties. Summers are dry and hot, with long stretches that reach triple digits. The average annual precipitation is around 30 inches (760 mm). Many dams were built in the Sierra Nevada to hold water. People in California depend on the water that comes from the Sierra Nevada mountains. [4]

California State Route 49 is the primary north–south highway through the region, passing through many historic mining communities. Major east–west highways include Interstate 80 and U.S. Route 50.

Two Amtrak routes run through the area. The eastern terminus of the Capitol Corridor is in Auburn. The California Zephyr stops in Colfax. [8]

Counties and the towns that are part of Gold Country: 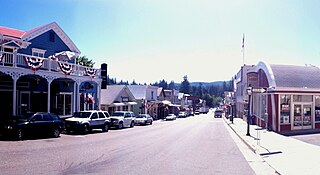 Nevada County is a county located in the U.S. state of California, in the Sierra Nevada. As of the 2020 census, the population was 102,241. The county seat is Nevada City. Nevada County comprises the Truckee-Grass Valley, CA Micropolitan Statistical Area, which is also included in the Sacramento-Roseville, CA Combined Statistical Area, part of the Mother Lode Country. 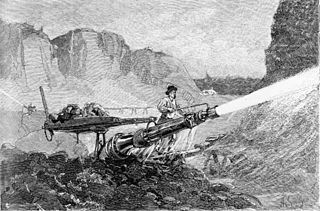 Hydraulic mining is a form of mining that uses high-pressure jets of water to dislodge rock material or move sediment. In the placer mining of gold or tin, the resulting water-sediment slurry is directed through sluice boxes to remove the gold. It is also used in mining kaolin and coal. 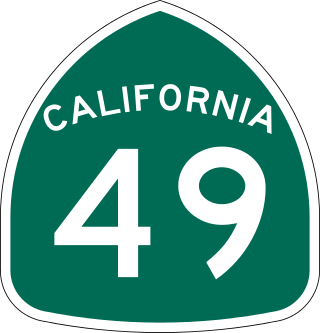 State Route 49 is a north–south state highway in the U.S. state of California that passes through many historic mining communities of the 1849 California gold rush. Highway 49 is numbered after the "49ers", the waves of immigrants who swept into the area looking for gold, and it is known as the Golden Chain Highway. This roadway begins at Oakhurst, Madera County, in the Sierra Nevada, where it diverges from State Route 41. It continues in a generally northwest direction, weaving through the communities of Goldside and Ahwahnee, before crossing into Mariposa County. State Route 49 then continues northward through the counties of Tuolumne, Calaveras, Amador, El Dorado, Placer, Nevada, Yuba, Sierra, and Plumas, where it reaches its northern terminus at State Route 70, in Vinton. 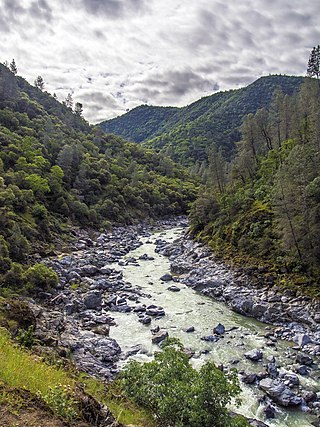 The Yuba River is a tributary of the Feather River in the Sierra Nevada and eastern Sacramento Valley, in the U.S. state of California. The main stem of the river is about 40 miles (64 km) long, and its headwaters are split into three major forks. The Yuba River proper is formed at the North Yuba and Middle Yuba rivers' confluence, with the South Yuba joining a short distance downstream. Measured to the head of the North Yuba River, the Yuba River is just over 100 miles (160 km) long.

Camptonville is a small town and census-designated place (CDP) located in northeastern Yuba County, California. The town is located 36 miles (58 km) northeast of Marysville, off Highway 49 between Downieville and Nevada City. It is located on a ridge between the North Fork and Middle Fork of the Yuba River, not far from New Bullards Bar Dam Reservoir. Camptonville lies at an elevation of 2825 feet. The population was 158 at the 2010 census. 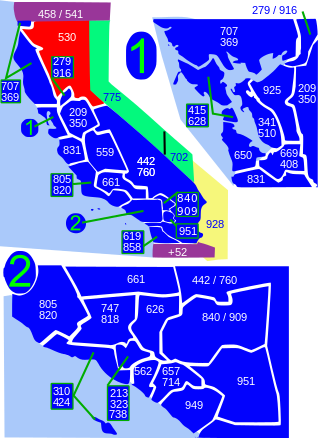 The Spenceville Wildlife Area is an 11,448-acre (46.33 km2) wildlife preserve managed by the California Department of Fish and Wildlife. It is located in the Sierra Nevada Foothills, within Nevada County and Yuba County of northern California. 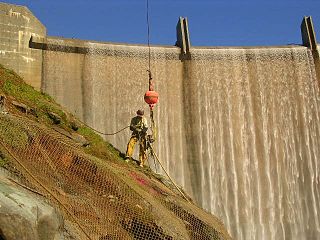 Englebright Dam is a 280 ft (85 m) high variable radius concrete arch dam on the Yuba River in the Sacramento River Basin, located in Yuba and Nevada counties of California, United States. It was put into service in 1941 by the United States Army Corps of Engineers.

The Golden Empire Council (GEC-BSA) is a California-based 501(c)(3) nonprofit affiliated with the Boy Scouts of America and its Western Region, Area 4. The council serves a large section of Northern California, primarily the Sacramento Valley and the northern Sierra Nevada. Its boundaries range north to south from Redding to Elk Grove and west to east from Vacaville to Pollock Pines and include 16 Northern California Counties. Its council headquarters and service center is located in Sacramento. The council also operates two Scout Shops selling BSA merchandise; located in Sacramento and Chico. 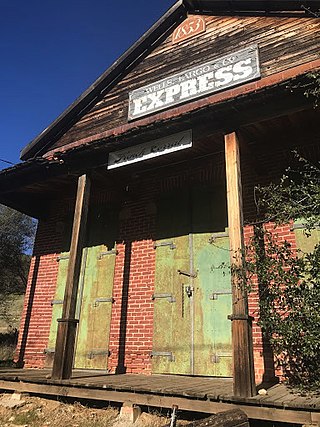 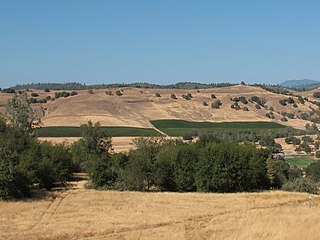 The Sierra Foothills AVA is an American Viticultural Area in the foothills of the Sierra Nevada in the U.S. state of California in the United States. Wine grapes were introduced to the area in the nineteenth century during the California Gold Rush. Over 100 wineries are located within its boundaries. 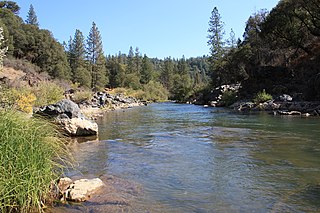 The Bear River is a tributary of the Feather River in the Sierra Nevada, winding through four California counties: Yuba, Sutter, Placer, and Nevada. About 73 miles (117 km) long, the river flows generally southwest through the Sierra then west through the Central Valley, draining a narrow, rugged watershed of 295 square miles (760 km2).

Woolsey's Flat was a historic mining town located on the San Juan Ridge, located about 17 miles northeast of Nevada City and about 3 miles northeast of North Bloomfield. The town was about 1 mile south of the Middle Yuba at an elevation of about 4200 ft. To the east lay the mining towns of Moore's Flat and Orleans Flat, each about I mile apart. All three were settled in 1851 and their histories frequently intertwine. Collectively, they are sometimes referred to as "The Flats. All three were part of Eureka Township.

Snow Point was a historic mining town in Nevada County, California on the San Juan Ridge about 2 miles east of Moore's Flat and about 6 miles west of Graniteville. It was located at an elevation of 4321 ft just off present day German Bar Road about midway between that road's intersections with present day Moore's Flat Road and Hagerty Road.

Mooney Flat was an important mining and transportation hub in western Nevada County, California, just east of the Yuba County line. It was situated on modern Mooney Flat Road, about 1 mile north of modern Highway 20, at an elevation of about 800 ft.

Henness Pass, elevation 6,916 ft (2,108 m), is a mountain pass northwest of Reno on the crest of the Sierra Nevada range in Sierra County, California. The pass is traversed by Henness Pass Road, a mostly unpaved road not generally passable by automobiles in winter. Portions of the road are recommended for high clearance vehicles only.

Charles Marsh was an influential figure in the building of the first transcontinental railroad, as well as in building water systems for hydraulic mining in the Sierra Nevada Mountains during the California Gold Rush. He was one of the founding directors of the Central Pacific Railroad. He was a surveyor and worked with Theodore D. Judah to survey and evaluate various possible routes for the first transcontinental railroad through the Sierra Nevada. He built a number of ditches and water pipelines to serve mines and towns there, and became known as the “Father of Ditches.” He was also one of the founders of the Nevada County Narrow Gauge Railroad.