The Port of Los Angeles, sprawling across the shorelines of San Pedro and Wilmington, is the busiest in the United States. When combined with the Port of Long Beach, it is the fifth-busiest in the world. Traditionally, most of the populations of Wilmington and San Pedro have worked for the port in some capacity. It is increasingly the primary driver of the Southern California economy: industrial growth in the Inland Empire is almost entirely attributable to increased port traffic since the 1980s. The massive increase in cargo volume has created significant air pollution (especially of particulate matter in neighboring communities, resulting from the combustion of low-grade marine diesel fuel).

The South Bay is the traditional home of Southern California's aerospace industry. While considerably shrunken from its Cold War peak, it still represents a major economic force, employing thousands in high-skill, high-wage engineering positions and generating enormous amounts of tax revenue. Northrop Grumman has a major facility in El Segundo where the F/A-18 Hornet fuselage is manufactured, as well as the headquarters of the Space Technology division in Redondo Beach and a facility at the Hawthorne Municipal Airport. Howmet Fastening Systems, a subsidiary of Howmet Aerospace which produces aerospace fasteners, has their corporate headquarters located in Torrance with manufacturing facilities in both Torrance and Carson. Boeing and Lockheed Martin also maintain extensive production facilities throughout the South Bay, and Raytheon's Space and Airborne Systems business unit is based in El Segundo. The Los Angeles Air Force Base and neighboring Aerospace Corporation, in El Segundo, is the locus of much of this aerospace research activity, as it is the primary development facility for military satellites and other space programs. DirecTV, a former subsidiary of Hughes Aircraft, is also headquartered in El Segundo for this reason. SpaceX also headquartered in the South Bay, is located in Hawthorne.

Japanese automobile manufacturer Honda maintains its North American headquarters in the South Bay, in the city of Torrance. (Nissan was also headquartered in the South Bay until late 2005, and The company then relocated to Tennessee, citing the high cost of running a business in California. Toyota left in 2017 for Plano, Texas for many of the same reasons.) While these locations are largely the legacy of the region's historical importance as a Japanese-American population center, it has proven fortuitous for two reasons: first, it enables closer oversight of vehicle import operations at the nearby ports; and second, it gives them proximity to the automobile customization culture that is prominent in nearby South Los Angeles. Tesla is stationed near the headquarters of SpaceX in Hawthorne

The Los Angeles MTA's A Line (opened in 1990 as the Blue Line) is a light rail line running between Downtown Los Angeles and Downtown Long Beach. It is the first of the MTA's modern rail lines since the 1961 demise of the Pacific Electric Railway's Red Car system. The C Line (opened in 1995 as the Green Line, together with the Glenn Anderson Freeway), a freeway-median light rail line, also serves the South Bay. It runs between Redondo Beach and Norwalk in the median of the Century Freeway (Interstate 105), providing indirect access to LAX via a shuttle bus and future automated people mover. The K Line open from Expo/Crenshaw and Westchester/Verterans but is expected to be fully operational at Aviation/Imperial station in 2023.

Several ports and harbors in the South Bay provide access to Santa Catalina Island, a popular resort. In addition, LAX borders El Segundo to the north in the neighborhood of Westchester, Los Angeles.

In addition to the Los Angeles Times , the South Bay cities are served by daily papers, the Daily Breeze , the weeklies The Beach Reporter and The Easy Reader , a bi-monthly real estate magazine, South Bay DIGS, and lifestyle publication 'Southbay Magazine'. The National Football League has its West Coast headquarters and production facility for NFL Network, NFL RedZone, and the NFL.com app in Inglewood.

The South Bay has a rich history in music, and has produced a number of significant rock bands, like Hawthorne natives The Beach Boys in the early 1960s, and continuing particularly in punk music. Other notable South Bay-based artists include:

The South Bay is host to many professional sports teams and entertainment venues. The Los Angeles Rams and Los Angeles Chargers of the National Football League play at SoFi Stadium in Inglewood. The LA Galaxy of Major League Soccer play their home games at Dignity Health Sports Park in Carson.

The Los Angeles Clippers of the National Basketball Association will play in their new stadium, Intuit Dome, in Inglewood beginning 2024. 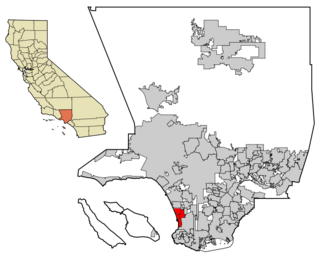 Beach Cities is a nickname for the coastal area of Los Angeles County comprising the oceanfront cities of Manhattan Beach, Hermosa Beach, and Redondo Beach, located on the south end of the Santa Monica Bay west and south of downtown Los Angeles, north of the Palos Verdes Peninsula on the Pacific Ocean in Southern California. Neighboring Torrance also shares a strip of beach property in the South Bay, but is generally excluded from the group. 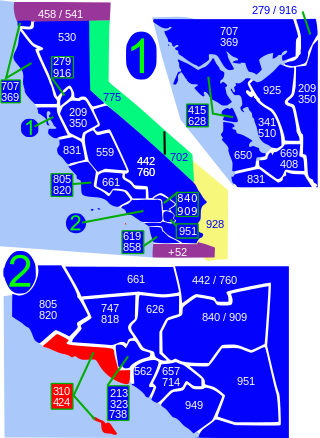 Area codes 310 and 424 are telephone area codes in the North American Numbering Plan (NANP) for the U.S. state of California. The numbering plan area includes the West Los Angeles and South Bay areas of Los Angeles County, a small portion of Ventura County, and Santa Catalina Island, which is located 26 miles (42 km) south.

State Route 107 is a state highway in the U.S. state of California that forms part of Hawthorne Boulevard in the Los Angeles Area from State Route 1 in Torrance north to Redondo Beach Boulevard at the Redondo Beach–Lawndale border.

The San Pedro Pastoral Region is a pastoral region of the Archdiocese of Los Angeles in the Roman Catholic Church. It covers Long Beach and southern Los Angeles County, with its headquarters in Lakewood. The current regional auxiliary bishop is Bishop Marc V. Trudeau. The region has 68 parishes, 10 high schools, many elementary schools, 6 hospitals, and no Spanish missions. 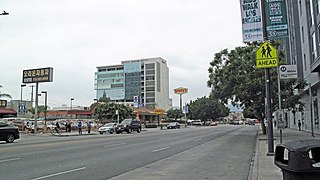 Vermont Avenue is one of the longest running north–south streets in City of Los Angeles and Los Angeles County, California. With a length of 23.3 miles (37.5 km), is the third longest of the north–south thoroughfares in the region. For most of its length between its southern end in San Pedro and south of Downtown Los Angeles, it runs parallel to the west of the Harbor Freeway (I-110). 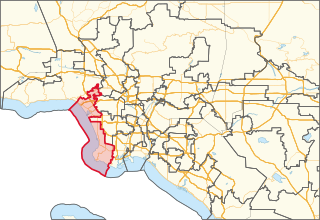 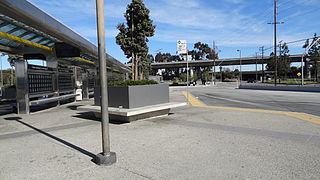 Harbor Gateway Transit Center, formerly Artesia Transit Center, is a large bus station at the southern end of the Harbor Transitway that serves as a transport hub for the South Bay region of Los Angeles County including the Harbor Gateway neighborhood of Los Angeles and cities of Carson, Gardena, and Torrance. The station consists of one large island platform with 12 bus bays and a 980 space park and ride parking lot located in the southwest corner of Interstate 110 and California State Route 91.

Rancho San Pedro was one of the first California land grants and the first to win a patent from the United States. The Spanish Crown granted the 75,000 acres (300 km2) of land to soldier Juan José Domínguez in 1784, with his descendants validating their legal claim with the Mexican government at 48,000 acres (190 km2) in 1828, and later maintaining their legal claim through a United States patent validating 43,119 acres (174.50 km2) in 1858. The original Spanish land grant included what today consists of the Pacific coast cities of Los Angeles harbor, San Pedro, the Palos Verdes peninsula, Torrance, Redondo Beach, Hermosa Beach, and Manhattan Beach, and east to the Los Angeles River, including the cities of Lomita, Gardena, Harbor City, Wilmington, Carson, Compton, and western portions of Long Beach and Paramount.

Artesia Boulevard is a west-east thoroughfare in Los Angeles County and Orange County.

This article covers streets in Los Angeles, California between and including 41st Street and 250th Street. Major streets have their own linked articles; minor streets are discussed here. 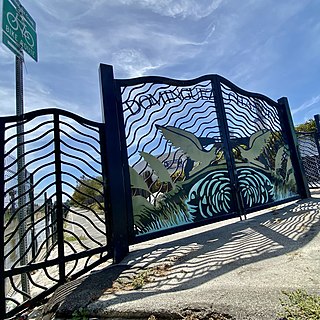 Dominguez Channel is a 15.7-mile-long (25.3 km) river in southern Los Angeles County, California, in the center of the Dominguez Watershed of 133 square miles (340 km2). 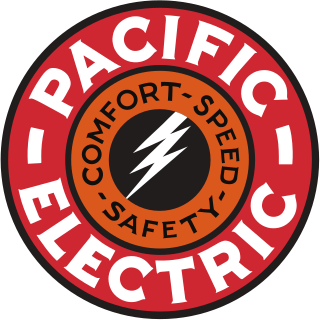 Redondo via Gardena was a line of the Pacific Electric Railway. One of two routes to Redondo Beach, this one was faster than the Redondo Beach via Playa del Rey Line as a result of its routing along the quadruple-tracked Watts main line.

San Pedro via Gardena was an interurban line of the Pacific Electric Railway. This was the railway's original route to San Pedro. The line was essential in the establishment of light industry in Torrance. The route closely paralleled the present-day Harbor Transitway.

The Hawthorne–El Segundo Line was an interurban railway route of the Pacific Electric Railway. It was built to transport oil from the Standard Oil Refinery in El Segundo and also saw passenger service. Unlike most corridors which hosted Pacific Electric passengers, the line remains largely intact as the Union Pacific El Segundo Industrial Lead.

Wikivoyage has a travel guide for South Bay .

Wikimedia Commons has media related to South Bay .
This page is based on this Wikipedia article
Text is available under the CC BY-SA 4.0 license; additional terms may apply.
Images, videos and audio are available under their respective licenses.