Blackstonia perfoliata or yellow-wort is a species of flowering plant in the family Gentianaceae found around the Mediterranean Basin, but extending into northwestern Europe.

Yellow-wort grows from ten to fifty centimetres (four to twenty inches), tall with stiff, branching stems. The leaves are glaucous, opposite and entire, the upper ones perfoliate, being united at the base. It bears terminal cymes of bright yellow, stalked flowers, 1–1.5 cm across. The calyx is deeply divided into 6–10 linear lobes or sepals, spirally arranged, free or nearly free from each other at the base and shorter than the corolla. The petals number six to ten and form a short tube. There are six to ten adherent stamens and a two-lobed stigma. [2]

This species is found in chalk or limestone turf and on dunes. It flowers from June to October in Britain where it is widespread but not common. [2] Pathogens affecting B. perfoliata include Peronospora chlorae . [3] 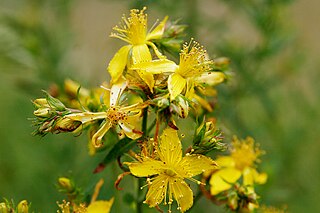 Hypericum is a genus of flowering plants in the family Hypericaceae. The genus has a nearly worldwide distribution, missing only from tropical lowlands, deserts and polar regions. Many Hypericum species are regarded as invasive species and noxious weeds. All members of the genus may be referred to as St. John's wort, and some are known as goatweed. The white or pink flowered marsh St. John's worts of North American and eastern Asia are now separated into the genus Triadenum. 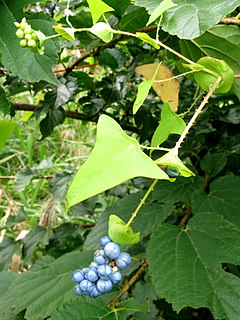 Persicaria perfoliata is a species of flowering plant in the buckwheat family. Common names include mile-a-minute, devil's tail, giant climbing tearthumb, and Asiatic tearthumb. It is a trailing herbaceous annual vine with barbed stems and triangular leaves. It is native to most of temperate and tropical eastern Asia, occurring from eastern Russia and Japan in the north, and the range extending to the Philippines and India in the south. P. perfoliata is an aggressive, highly invasive weed.

Hypericaceae is a plant family in the order Malpighiales, comprising six to nine genera and up to 700 species, and commonly known as the St. John’s wort family. Members are found throughout the world apart from extremely cold or dry habitats. Hypericum and Triadenum occur in temperate regions but other genera are mostly tropical.

Claytonia perfoliata, also known as miner's lettuce, Indian lettuce, spring beauty, or winter purslane, is a flowering plant in the family Montiaceae. It is a fleshy, herbaceous, annual plant native to the western mountain and coastal regions of North America, from southernmost Alaska and central British Columbia, all the way south to Central America, but most common in California in the Sacramento and northern San Joaquin Valleys.

West Yatton Down is a 14.4 hectare biological Site of Special Scientific Interest in Wiltshire, notified in 1971.

Whitevine Meadows is a 13.0 hectare biological Site of Special Scientific Interest east of North and South Perrott in Somerset, notified in 1979. 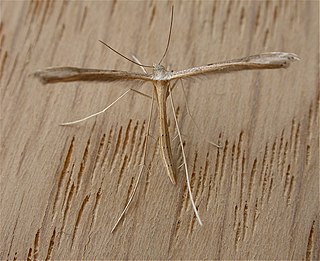 Stenoptilia zophodactylus, also known as the dowdy plume, is a species of moth of the family Pterophoridae found worldwide. It was first described by Philogène Auguste Joseph Duponchel in 1840.

Hypericum mutilum is a species of St. John's wort known by the common name dwarf St. John's wort. It is native to parts of North America and is present in other parts as an introduced species. It is an annual or perennial herb taking a multibranched erect form up to about 60 centimeters tall. The oval green leaves are one or two centimeters long and are covered in tiny glands. The inflorescence is a compound cyme of tiny flowers. H. mutilum subsp. mutilum and subsp. boreale have a diploid number of 16, and H. mutilum subsp. boreale can have a diploid number of 18.

Veronica perfoliata, commonly known as digger's speedwell, is a common perennial herb found at higher altitudes in south-eastern Australia. It is a low-growing multi-stemmed plant rising from a woody rootstock. It has rounded blue-grey foliage and sprays of intense violet-blue flowers at the end of arching branches. It is occasionally cultivated as a garden plant. 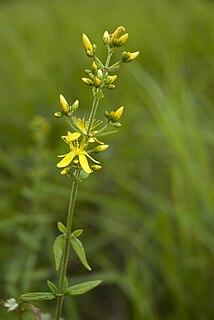 Hypericum hirsutum is a flowering plant in the genus Hypericum commonly known as hairy St John's-wort. It is found in Western Europe. 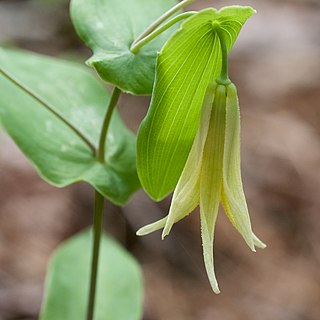 Hypericum punctatum, the spotted St. John's wort, is a perennial herb native to North America. The yellow-flowered herb occurs throughout eastern North America into southern Canada. The process of microsporogenesis carried out by this plant is prone to errors in chromosomal segregation. It has a diploid number of 14 or 16. Insects are attracted to the plant's pollen and the hypericin in the plant's leaves is toxic to mammals.

Hypericum lancasteri, known as Lancaster's St. John's wort or as zhan e jin si tao in Chinese, is a species of shrub in Hypericumsect. Ascyreia. 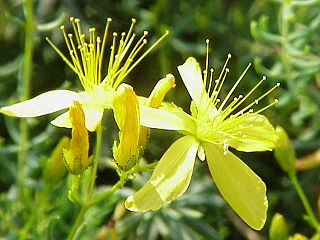 Hypericum coris, the heath-leaved St. John's wort, also called yellow coris, is a species of flowering plant in the genus Hypericum, and is the type species of sect. Coridium. It is a low shrub that grows close to the ground, and it is found in Switzerland and northwestern Italy. The species has been a popular garden plant since the 18th century, valued for its long flowering period and for how well it adapts to cultivation.

Blackstonia is a genus of flowering plants of the family Gentianaceae, native to Europe and to nearby regions of Asia and Africa. Its best known species is its type species, Blackstonia perfoliata, the yellow-wort.