A calcaneal spur (also known as a heel spur) is a bony outgrowth from the calcaneal tuberosity (heel bone). [1] Calcaneal spurs are typically detected by x-ray examination. [2] It is a form of exostosis.

When a foot is exposed to constant stress, calcium deposits build up on the bottom of the heel bone. Generally, this has no effect on a person's daily life. However, repeated damage can cause these deposits to pile up on each other, causing a spur-shaped deformity, called a calcaneal (or heel) spur. [3]

An inferior calcaneal spur is located on the inferior aspect of the calcaneus and is typically a response to plantar fasciitis over a period, but may also be associated with ankylosing spondylitis (typically in children). A posterior calcaneal spur develops on the back of the heel at the insertion of the Achilles tendon. [3]

Major symptoms consist of pain in the region surrounding the spur, which typically increases in intensity after prolonged periods of rest. Patients may report heel pain to be more severe when waking up in the morning. Patients may not be able to bear weight on the afflicted heel comfortably. Running, walking, or lifting heavy weight may exacerbate the issue. [4]

Plantar fasciitis is a common cause of calcaneal spurs. When stress is put on the plantar fascia ligament, it does not cause only plantar fasciitis, but causes a heel spur where the plantar fascia attaches to the heel bone. [5] The considerations that affect plantar heel pain are the alignment of the foot with lower leg, foot and ankle mobility, strength and endurance of muscle. External influences on plantar heel pain are the amount of time spent on feet while exercising or standing, type of footwear used and type of floor surfaces. [6]

Calcaneal spur develops when proper care is not given to the foot and heels. [2] People who are obese, have flat feet, or who often wear high-heeled shoes are most susceptible to heel spurs. [5] Flat feet can potentially be attributed to the minimal amount of ankle dorsiflexion during stance phase of the gait cycle causing more tension on the plantar fascia. [6]

Spur outgrowths can be detected through physical exam followed by a lateral foot x-ray.[ citation needed ]

It is often seen as a repetitive stress injury, and thus lifestyle modification is typically the basic course of management strategies. For example, a person should begin doing foot and calf workouts. Strong muscles in the calves and lower legs will help take the stress off the bone and prevent heel spurs. Icing the area is an effective way to get immediate pain relief. There are several means to get pain relief from plantar heel pain. [7] Plantar heel pain can be a precursor to many pathologies of the foot. [8] There is evidence that corticosteroid injections may reduce pain for up to one month after the injection, which can have an impact on the formation of calcaneal spurs. Side effects of corticosteroid injections includes peripheral nerve injury, plantar fascia rupture, and post injection flare, among others. [9] Laser therapy, dry needling, and calcaneal taping are also utilized in treating plantar heel pain, however, there is not high quality evidence supporting the clinical usage of such modalities in reduction of pain. [8] 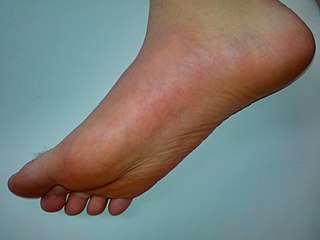 The heel is the prominence at the posterior end of the foot. It is based on the projection of one bone, the calcaneus or heel bone, behind the articulation of the bones of the lower leg. 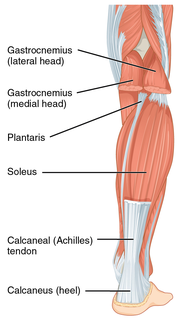 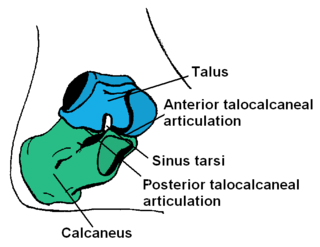 In humans and many other primates, the calcaneus or heel bone is a bone of the tarsus of the foot which constitutes the heel. In some other animals, it is the point of the hock.

Pes cavus, also known as high arch, is a human foot type in which the sole of the foot is distinctly hollow when bearing weight. That is, there is a fixed plantar flexion of the foot. A high arch is the opposite of a flat foot and is somewhat less common. 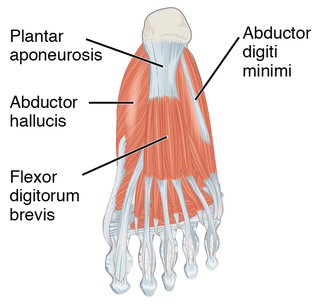 The plantar fascia is the thick connective tissue (aponeurosis) which supports the arch on the bottom of the foot. It runs from the tuberosity of the calcaneus forward to the heads of the metatarsal bones. 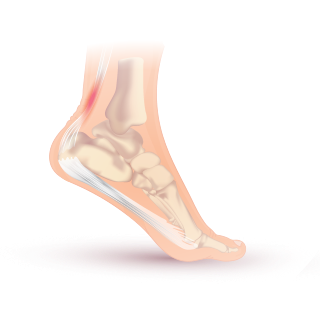 Achilles tendinitis, also known as achilles tendinopathy, occurs when the Achilles tendon, found at the back of the ankle, becomes sore. Achilles tendinopathy is accompanied by alterations in the tendon’s structure and mechanical properties. The most common symptoms are pain and swelling around the affected tendon. The pain is typically worse at the start of exercise and decreases thereafter. Stiffness of the ankle may also be present. Onset is generally gradual.

Achilles tendon rupture is when the Achilles tendon, at the back of the ankle, breaks. Symptoms include the sudden onset of sharp pain in the heel. A snapping sound may be heard as the tendon breaks and walking becomes difficult.

Morton's neuroma is a benign neuroma of an intermetatarsal plantar nerve, most commonly of the second and third intermetatarsal spaces, which results in the entrapment of the affected nerve. The main symptoms are pain and/or numbness, sometimes relieved by ceasing to wear footwear with tight toeboxes and high heels. The condition is named after Thomas George Morton, though it was first correctly described by a chiropodist named Durlacher.

Sever's Disease, otherwise known as apophysitis of the calcaneus, is an inflammation of the growth plate in the heel of growing children. The condition presents as pain in the heel and is caused by repetitive stress to the heel and is thus particularly common in active children. It usually resolves when the bone has completed growth or activity is lessened. The pain can be eased through stretching.

The arches of the foot, formed by the tarsal and metatarsal bones, strengthened by ligaments and tendons, allow the foot to support the weight of the body in the erect posture with the least weight.

An accessory navicular bone is an accessory bone of the foot that occasionally develops abnormally in front of the ankle towards the inside of the foot. This bone may be present in approximately 2-21% of the general population and is usually asymptomatic. When it is symptomatic, surgery may be necessary. 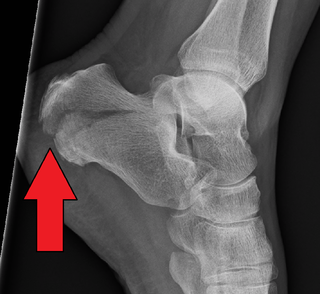 A calcaneal fracture is a break of the calcaneus. Symptoms may include pain, bruising, trouble walking, and deformity of the heel. It may be associated with breaks of the hip or back.

Tailor's bunion is a condition caused as a result of inflammation of the fifth metatarsal bone at the base of the little toe.

Plantar calcaneal bursitis is a medical condition in which there is inflammation of the plantar calcaneal bursa, a spongy fluid filled sac that cushions the fascia of the heel and the calcaneus. It is characterized by swelling and tenderness of the central plantar heel area. It is sometimes called 'Policeman's heel'. It sometimes was, and should not be, confused with plantar fasciitis, which is inflammation of the plantar fascia and can affect any part of the foot.

Heel pad syndrome is a pain that occurs in the center of the heel. It is typically due to atrophy of the fat pad which makes up the heel. Risk factors include obesity. Other conditions with similar symptoms include plantar fasciitis. Treatment includes rest, pain medication, and heel cups. It becomes more common with age.

Running injuries affect about half of runners annually. The frequencies of various RRI depend on the type of running, such as speed and mileage. Some injuries are acute, caused by sudden overstress, such as side stitch, strains, and sprains. Many of the common injuries that affect runners are chronic, developing over longer periods as the result of overuse. Common overuse injuries include shin splints, stress fractures, Achilles tendinitis, Iliotibial band syndrome, Patellofemoral pain, and plantar fasciitis.