Historic Denbighshire (Welsh : Sir Ddinbych) is one of thirteen traditional counties in Wales, a vice-county and a former administrative county, which covers an area in north east Wales. It is a maritime county, bounded to the north by the Irish Sea, to the east by Flintshire, Cheshire and Shropshire, to the south by Montgomeryshire and Merionethshire, and to the west by Caernarfonshire.

Denbighshire was created by the Laws in Wales Acts 1535-1542 from areas previously in the Marches. It was formed from Cantrefi taken as follows;

From the Lordship of Denbigh:

In the south and west of the county, the mountains of the Clwydian Range rise from 1000 to 2,500 ft (760 m) high. The east is hilly. There is some level ground along the coastal strip. The highest points are Moel Sych and Cader Berwyn at 2,728 feet (831 m). Pistyll-y-Rhaeader is a spectacular 240 feet (73 m) waterfall. The chief rivers are the Clwyd and the Dee. The River Conwy runs north along the western boundary.

The main towns in the county are Rhyl, Abergele, Mochdre, Denbigh, Kinmel Bay, Llangollen, Llanrwst, Wrexham, Colwyn Bay and Ruthin. Villages such as Glan Conwy, Eglwysbach, and Llansannan also came under Denbighshire. The most important industries are agriculture and tourism.

An administrative county of Denbighshire was created in 1889 by the Local Government Act 1888. The county was governed by an elected county council, who took over the functions of the Quarter Sessions courts.

The administrative county was subdivided into municipal boroughs and urban and rural districts.

In 1935 the rural districts were reorganised by a County Review Order, and reduced to five in number: Aled, Ceiriog, Hiraethog, Ruthin and Wrexham.

The administrative county was abolished in 1974, with most of its territory becoming part of the new districts of Colwyn, Wrexham Maelor and Glyndŵr in Clwyd. The urban district of Llanrwst and five rural parishes were included in Gwynedd.

Denbighshire is a county in north-east Wales, whose borders differ from the historic county of the same name. It is the part of Wales known to have been inhabited longest – Pontnewydd (Bontnewydd-Llanelwy) Palaeolithic site has Neanderthal remains of 225,000 years ago. Its several castles include Denbigh, Rhuddlan, Ruthin, Castell Dinas Bran and Bodelwyddan. St Asaph, one of Britain's smallest cities, has one of its smallest Anglican cathedrals. Denbighshire has coastline to the north and hills to the east, south and west. The River Clwyd creates a broad fertile valley down the centre of a mainly rural county with little industry. Crops are grown in the Vale of Clwyd and cattle and sheep reared in the uplands. The coast attracts tourists; hikers frequent the Clwydian Range, which forms an Area of Outstanding Natural Beauty with the upper Dee Valley. Llangollen hosts the Llangollen International Musical Eisteddfod each July. 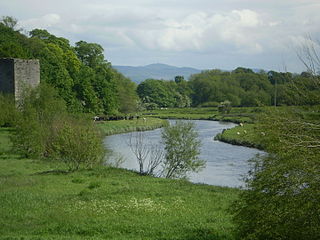 The River Clwyd is a river in Wales that rises in the Clocaenog Forest 5 mi (8.0 km) northwest of Corwen.

Clwyd is a preserved county of Wales, situated in the north-east corner of the country; it is named after the River Clwyd, which runs through the county. To the north lies the Irish Sea, with the English counties of Cheshire to the east and Shropshire to the south-east. The Welsh counties of Powys and Gwynedd lie to the south and west respectively. Clwyd also shares a maritime boundary with the English county of Merseyside along the River Dee. Between 1974 and 1996, it was a county with a county council, one of the eight counties into which Wales was divided, and was subdivided into six districts. In 1996, the county of Clwyd was abolished, and the new unitary authorities of Wrexham, Conwy County Borough, Denbighshire, and Flintshire were created; under this reorganisation, "Clwyd" became a preserved county, with the name being retained for certain ceremonial functions.

The Borough of Colwyn was one of six districts of the county of Clwyd, north-east Wales, from 1974 to 1996. 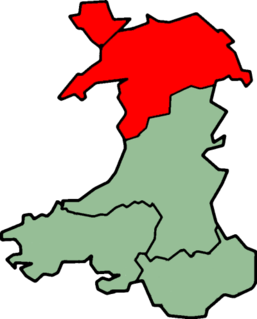 North Wales is an unofficial region of Wales. Retail, transport and educational infrastructure are centred on Wrexham, Rhyl, Colwyn Bay, Llandudno, Bangor and Caernarfon. It is bordered to the rest of Wales with the counties of Ceredigion and Powys, and to the east by the English counties of Shropshire, Merseyside, and Cheshire. People from North Wales are sometimes referred to as "Gogs", derived from "gogledd" - the Welsh for "north".

Wrexham Maelor was one of six local government districts of the county of Clwyd, north-east Wales, from 1974 to 1996.

The Borough of Aberconwy was one of five districts of Gwynedd, north-west Wales, from 1974 to 1996. 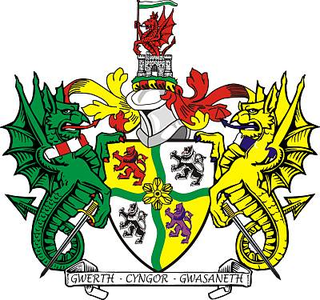 The Vale of Clwyd is a tract of low-lying ground in the county of Denbighshire in northeast Wales. The Vale extends south-southwestwards from the coast of the Irish Sea for some 20 miles forming a triangle of low ground bounded on its eastern side by the well-defined scarp of the Clwydian Range and to the west by numerous low hills. The River Clwyd which rises within Clocaenog Forest, southwest of Denbigh, runs the full length of the vale. It is joined by the two major left bank tributaries of the River Clywedog and River Elwy and the smaller right bank tributary of the River Wheeler.

Aled was a rural district in the administrative county of Denbighshire, Wales, from 1935 to 1974.

Denbigh was a county constituency centred on the town of Denbigh in North Wales. It returned one Member of Parliament (MP) to the House of Commons of the Parliament of the United Kingdom, elected by the first-past-the-post voting system.

Conwy & Denbighshire NHS Trust was an NHS Trust in Wales. The headquarters of the Trust were in Glan Clwyd Hospital, in Bodelwyddan, near Rhyl, Denbighshire. The Trust was named in the 'Top 40 Hospitals' in the UK for the fifth year running in 2006, a title conferred by CHKS.

The LL postcode area, also known as the Llandudno postcode area, is a group of 67 postcode districts covering the vast bulk of north Wales and a little of west Wales. It excludes most of Flintshire and Bronington in Wrexham County Borough yet includes, in England, Chirk Bank. It starts at LL11 to avoid confusion with Liverpool postcodes. Its numbering is geography-based and omits LL50.

The office of High Sheriff of Clwyd was established in 1974 as part of the creation of the county of Clwyd in Wales following the Local Government Act 1972, and effectively replaced the shrievalties of the amalgamated counties of Flintshire and Denbighshire.

Betsi Cadwaladr University Health Board is a Local Health Board in north Wales. It is the largest health organisation in Wales, providing a full range of primary, community, mental health, and acute hospital services for a population of around 694,000 people across the six principal areas of north Wales as well as some parts of Mid Wales, Cheshire and Shropshire.