In Canada, according to NRCan CGNDB:

In the United States, according to USGS GNIS:

In geology, felsic refers to igneous rocks that are relatively rich in elements that form feldspar and quartz. It is contrasted with mafic rocks, which are relatively richer in magnesium and iron. Felsic refers to silicate minerals, magma, and rocks which are enriched in the lighter elements such as silicon, oxygen, aluminium, sodium, and potassium. Felsic magma or lava is higher in viscosity than mafic magma/lava.

Mount Sinai, also known as Mount Horeb or Gabal Musa, is a mountain in the Sinai Peninsula of Egypt that is a possible location of the biblical Mount Sinai, which is considered a holy site by the Abrahamic religions. Mount Sinai is mentioned many times in the Book of Exodus and other books of the Bible, and the Quran. According to Jewish, Christian, and Islamic tradition, the biblical Mount Sinai was the place where Moses received the Ten Commandments.

Granite County is a county located in the U.S. state of Montana. As of the 2010 United States Census, the population was 3,079. Its county seat is Philipsburg. The county was founded in 1893, and was named for a mountain which contains the Granite Mountain silver mine.

A needle is generally a thin, cylindrical object, often with a sharp point on the end. 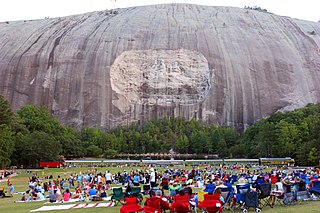 Stone Mountain is a quartz monzonite dome monadnock and the site of Stone Mountain Park near Stone Mountain, Georgia. At its summit, the elevation is 1,686 feet (514 m) above sea level and 825 feet (251 m) above the surrounding area. Stone Mountain is well known for not only its geology, but also the enormous rock relief on its north face, the largest bas-relief in the world. The carving depicts three Confederate figures, Jefferson Davis, Robert E. Lee and Stonewall Jackson, and has been the subject of widespread controversy.

Granite Mountains may refer to one of at least six mountain ranges in the United States:

Brahmagiri, is a mountain range in the Western Ghats of south India. It is situated on the border between Kodagu district in Karnataka state in the north and Wayanad district of Kerala state on the south. Brahmagiri Hill, at 1608 m height, is a scenic tourist attraction. The top of Brahmagiri Hill is well forested and has a lot of wildlife. 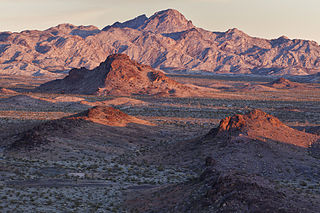 Pedra da Gávea is a monolithic mountain in Tijuca Forest, Rio de Janeiro, Brazil. Composed of granite and gneiss, its elevation is 844 metres (2,769 ft), making it one of the highest mountains in the world that ends directly in the ocean. Trails on the mountain were opened up by the local farming population in the early 1800s; today, the site is under the administration of the Tijuca National Park.

A hillock or knoll is a small hill, usually separated from a larger group of hills such as a range. Hillocks are similar in their distribution and size to small mesas or buttes. The term is largely a British one. This particular formation occurs often in Great Britain and China. A similar type of landform in the Scandinavian countries goes by the name ”kulle” or ”bakke” and is contrary to the above phenomena formed when glaciers polish down hard, crystalline bedrock of gneiss or granites, leaving a rounded rocky hillock with sparse vegetation.

Granite Mountain can refer to:

Mount Waldo is a small mountain about 1,060 feet (320 m) high in Waldo County, Maine. It is located in the town of Frankfort.

The Granite Mountains of Arizona is a mountain range in the Sonoran Desert of southern Arizona. It is located in extreme western Pima County, Arizona, bordering southeast Yuma County.

Granite Range may refer to:

Granite Mountain, 2036 m (6680 ft) prominence: 134 m, is a mountain in the Rossland Range of the Monashee Mountains in the West Kootenay region of southeastern British Columbia, Canada. It is located just northwest of the city of Rossland and is the higher of the two mountains forming the core of the Red Mountain Ski Resort, the other being the eponymous Red Mountain. 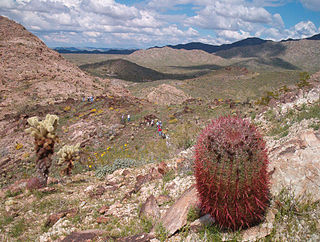 The Granite Wash Mountains are a short, arid, low elevation mountain range of western-central Arizona, in the southeast of La Paz County. The range borders a slightly larger range southeast, the Little Harquahala Mountains; both ranges form a section on the same water divide between two desert washes. The washes flow in opposite directions, one northwest to the Colorado River, the other southeast to the Gila River.

Rose Mountain may refer to: