The Gullah-Geechee Cultural Heritage Corridor extends along the coast of the southeastern United States through North Carolina, South Carolina, Georgia and Florida in recognition of the Gullah-Geechee people and culture. Gullah-Geechee are direct descendants of West African slaves brought into the United States around the 1700s. They were forced to work in rice paddies, cotton fields and indigo plantations along the South Carolina-Georgia seaboard where the warm and moist climate conditions helped them to preserve many African traditions . After the abolition of slavery, Gullah-Geechee people settled in remote villages around the coastal swath, where, thanks to their relative isolation, they formed strong communal ties and a unique culture that has endured for centuries. [7]

The corridor is administered as a National Heritage Area in partnership between the National Park Service and local governments and cultural and tourism authorities. [2]

The corridor is specifically focused on 79 Atlantic barrier islands within the designated area and their African-American inhabitants, and adjoining areas within 30 miles (48 km) of the coastline. [2] The corridor includes Charles Pinckney National Historic Site, from which it is administered. [8]

Navassa is a town in Brunswick County, North Carolina, United States. The population was 1,505 at the 2010 census, up from 479 at the 2000 census. Navassa is part of the Myrtle Beach metropolitan area.

Gullah is a creole language spoken by the Gullah people, an African-American population living in coastal regions of South Carolina and Georgia as well as extreme northeastern Florida and the extreme southeast of North Carolina.

Hoodoo is a set of spiritual practices, traditions, and beliefs created by African slaves in North America that were held in secret from slaveholders. Hoodoo evolved from various traditional African religions and practices, and in the American South, incorporated various elements of indigenous botanical knowledge. In the Gullah South Carolina Lowcountry Hoodoo is also known as "Lowcountry Voodoo." Following the Great Migration of African-Americans, Hoodoo spread throughout the United States. Practitioners of Hoodoo are called rootworkers, conjure man or conjure woman, and Hoodoo doctors. Regional synonyms for hoodoo include conjure or rootwork.

The Gullah are African Americans who live in the Lowcountry region of the U.S. states of Georgia, Florida, and South Carolina, in both the coastal plain and the Sea Islands. They developed a creole language, also called Gullah, and a culture with some African influence.

Daufuskie Island, located between Hilton Head Island and Savannah, is the southernmost inhabited sea island in South Carolina. It is 5 miles (8 km) long by almost 2.5 miles (4.0 km) wide – approximate surface area of 8 square miles (21 km2). With over 3 miles (5 km) of beachfront, Daufuskie is surrounded by the waters of Calibogue Sound, the Intracoastal Waterway and the Atlantic Ocean.

Marquetta L. Goodwine is an author, preservationist, and performance artist who serves as Queen Quet, Chieftess of the Gullah/Geechee Nation. 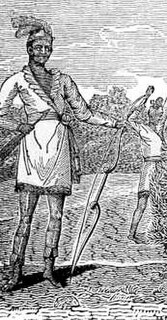 The Black Seminoles or Afro-Seminoles are black Indians associated with the Seminole people in Florida and Oklahoma. They are mostly blood descendants of the Seminole people, free blacks and of escaped slaves who allied with Seminole groups in Spanish Florida. Many have Seminole lineage, but due to the stigma of having dark skin, they all have been categorized as slaves or freedmen.

Emory Campbell is a community leader among the Gullah people, African Americans who live in the coastal low country region of South Carolina and Georgia. The Gullahs have preserved more of their African linguistic and cultural heritage than any other black community in the US.

McLeod Plantation is a former forced-labor plantation located on James Island, South Carolina, near the intersection of Folly and Maybank roads at Wappoo Creek, which flows into the Ashley River. The plantation is considered an important Gullah heritage site, preserved in recognition of its cultural and historical significance to African-American and European-American cultures. 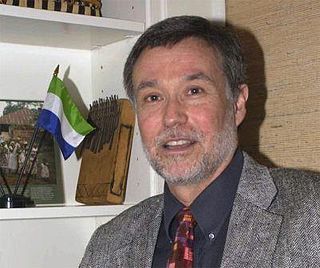 Joseph A. Opala, OR is an American historian noted for establishing the "Gullah Connection," the historical links between the indigenous people of the West African nation of Sierra Leone and the Gullah people of the Low Country region of South Carolina and Georgia in the United States.

The Penn Center, formerly the Penn School, is an African-American cultural and educational center in the Corners Community, on Saint Helena Island. Founded in 1862 by Quaker and Unitarian missionaries from Pennsylvania, it was the first school founded in the Southern United States specifically for the education of African-Americans. It provided critical educational facilities to Gullah slaves freed after plantation owners fled the island, and continues to fulfill an educational mission. The campus was designated a National Historic Landmark District in 1974. Darrah Hall and Brick Baptist Church on the campus were declared part of Reconstruction Era National Monument in January 2017. In spring of 2019, it became the Reconstruction Era National Historic Park, along with Fort Sumter.

Gullah Gullah Island is an American musical children's television series that was produced by and aired on the Nick Jr. programming block on the Nickelodeon network from 1994 to 1998. The show was hosted by Ron Daise - now the vice president for Creative Education at Brookgreen Gardens - and his wife Natalie Daise, both of whom also served as cultural advisors, and were inspired by the Gullah culture of Ron Daise's home of St. Helena Island, South Carolina, part of the Sea Islands.

Hog Hammock is an African-American community on Sapelo Island, a barrier island of the U.S. state of Georgia.

Cornelia Walker Bailey was a storyteller, writer, and historian who worked to preserve the Geechee-Gullah culture of Sapelo Island, Georgia.

Geechie is a word referring to the U.S. Lowcountry ethnocultural group of the descendants of West African slaves who retained their cultural and linguistic history, otherwise known as the Gullah people and Gullah language. It has been used as a nickname for persons originating out of this culture and ethnic group. The term derives from the name of the Ogeechee River, an area where many of them settled.

The Geechee or Gullah are African Americans who live in the Lowcountry region of the U.S. states of Georgia, Florida, and South Carolina.

The Gullah are African Americans who live in the Lowcountry region of the U.S. states of Georgia, Florida, and South Carolina.

Griffin Lotson is an African-American historian, born in Crescent, Georgia. He is a seventh-generation Gullah Geechee. He serves as a councilman and the mayor pro-tem in Darien, Georgia. He also manages the Geechee Gullah Ring Shouters. He is the national Federal Government vice-chairman and former treasurer of the federal Gullah Geechee Cultural Heritage Corridor Commission.