Eight pueblos are included in the National Heritage Area: [4]

The Jicarilla Apache reservation is also within in the heritage area. [4]

The heritage area also commemorates the influence of Hispanic colonists from the Viceroyalty of New Spain (colonial México), who arrived in the late 1590s and onwards. [5]

Spanish colonial sites in the National Heritage Area include:

Natural areas protected at the federal level within the National Heritage Area include portions of: [7]

New Mexico state parks within the heritage area include: [7]

Scenic drives and byways with sections through parts of the heritage area include:

The Puebloans or Pueblo peoples, are Native Americans in the Southwestern United States who share common agricultural, material, and religious practices. Pueblo, which means "village" in Spanish, was a term originating with the Colonial Spanish, who used it to refer to the people's particular style of dwelling. 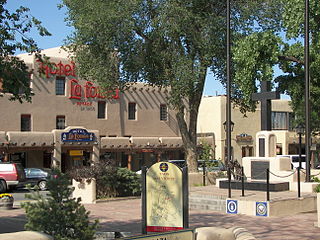 Taos is a town in Taos County in the north-central region of New Mexico in the Sangre de Cristo Mountains. Initially founded in 1615, it was intermittently occupied until formally established in 1795 by Nuevo México Governor Fernando Chacón to act as fortified plaza and trading outpost for the neighboring Native American Taos Pueblo and Hispano communities, including Ranchos de Taos, Cañon, Taos Canyon, Ranchitos, El Prado, and Arroyo Seco. The town was incorporated in 1934. As of the 2010 census, its population was 5,716.

In the Southwestern United States, Pueblo (capitalized) refers to the Native tribes of Puebloans having fixed-location communities with permanent buildings. The Spanish explorers of northern New Spain used the term pueblo to refer to permanent indigenous towns they found in the region, mainly in New Mexico and parts of Arizona, in the former province of Nuevo México. This term continued to be used to describe the communities housed in apartment structures built of stone, adobe mud, and other local material. The structures were usually multi-storied buildings surrounding an open plaza, with rooms accessible only through ladders raised/lowered by the inhabitants, thus protecting them from break-ins and unwanted guests. Larger pueblos were occupied by hundreds to thousands of Puebloan people. Various federally recognized tribes have traditionally resided in pueblos of such design. Later Pueblo Deco and modern Pueblo Revival architecture, which mixes elements of traditional Pueblo and Hispano design, has continued to be a popular architectural style in New Mexico. The term is now part of the proper name of some historical sites, such as Acoma Pueblo.

The Pueblo Revolt of 1680, also known as Popé's Rebellion or Popay's Rebellion, was an uprising of most of the indigenous Pueblo people against the Spanish colonizers in the province of Santa Fe de Nuevo México, larger than present-day New Mexico. The Pueblo Revolt killed 400 Spaniards and drove the remaining 2,000 settlers out of the province. The Spaniards reconquered New Mexico twelve years later. 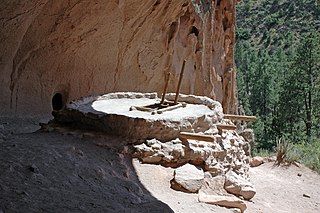 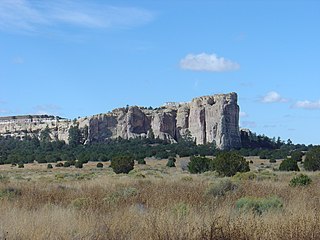 El Morro National Monument is a U.S. national monument in Cibola County, New Mexico, United States. Located on an ancient east–west trail in the western part of the state, the monument preserves the remains of a large prehistoric pueblo atop a great sandstone promontory with a pool of water at its base, which subsequently became a landmark where many centuries of explorers and travelers left historic inscriptions that survive today. 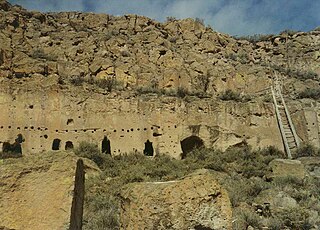 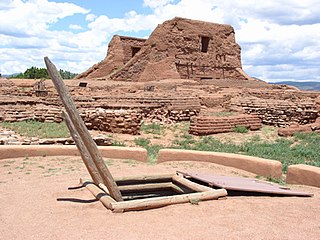 Pecos National Historical Park is a United States National Historical Park in San Miguel and Santa Fe Counties, New Mexico. The park, operated by the National Park Service, encompasses thousands of acres of landscape infused with historical elements from prehistoric archaeological ruins to 19th-century ranches, to a battlefield of the American Civil War. Its largest single feature is Pecos Pueblo also known as Cicuye Pueblo, a Native American community abandoned in historic times. First a state monument in 1935, it was made Pecos National Monument in 1965, and greatly enlarged and renamed in 1990. Two sites within the park, the pueblo and the Glorieta Pass Battlefield, are National Historic Landmarks. 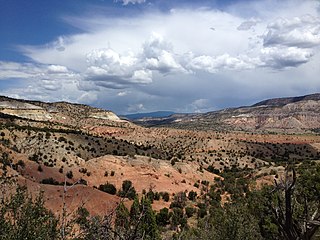 Northern New Mexico in cultural terms usually refers to the area of heavy-Spanish settlement in the north-central part of New Mexico. However, New Mexico state government also uses the term to mean the northwest and north central, but to exclude both the northeastern high plains counties and Sandoval County. The five largest cities in Northern New Mexico are: Santa Fe, Las Vegas, Española, Los Alamos, and Raton. 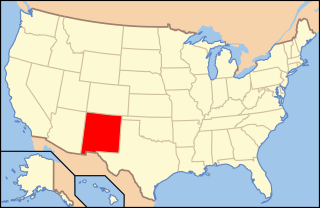 The following is an alphabetical list of articles related to the U.S. state of New Mexico. 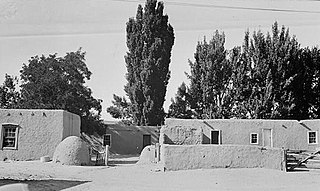 San Gabriel de Yungue-Ouinge, or San Gabriel de Yunque, was the site of the first Spanish capital of its provincial territory of Santa Fe de Nuevo México. It is located where the Rio Chama meets the Rio Grande, west of present-day Ohkay Owingeh, New Mexico. The pueblo of Yuque Yunque was taken by Juan de Oñate, and he founded his colonial government there. It was moved to Santa Fe in 1610. The site was declared a National Historic Landmark in 1964. The archaeological site was leveled and plowed over in 1984, and a historical marker has been placed on the west side of the Rio Grande, off the old New Mexico State Road 74. 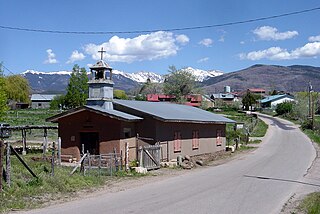 The 56-mile (90 km) High Road to Taos is a scenic, winding road through the Sangre de Cristo Mountains between Santa Fe and Taos.. It winds through high desert, mountains, forests, small farms, and tiny Spanish Land Grant villages and Pueblo Indian villages. Scattered along the way are the galleries and studios of traditional artisans and artists drawn by the natural beauty. It has been recognized by the state of New Mexico as an official Scenic Byway. 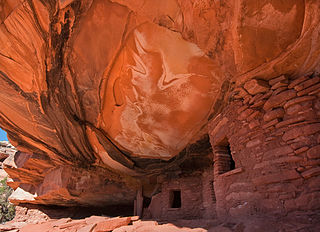 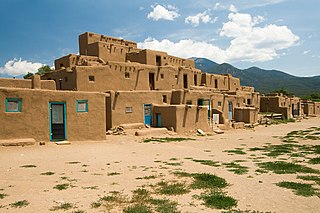 The Pueblo IV Period was the fourth period of ancient pueblo life in the American Southwest. At the end of prior Pueblo III Period, Ancestral Puebloans living in the Colorado and Utah regions abandoned their settlements and migrated south to the Pecos River and Rio Grande valleys. As a result, pueblos in those areas saw a significant increase in total population. 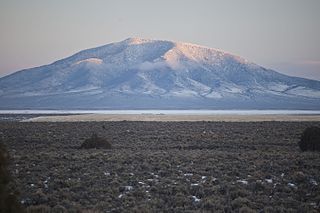 The Rio Grande del Norte National Monument is an approximately 242,555-acre (98,159 ha) area of public lands in Taos County, New Mexico, proclaimed as a national monument on March 25, 2013 by President Barack Obama under the provisions of the Antiquities Act. It consists of the Rio Grande Gorge and surrounding lands, managed by the Bureau of Land Management (BLM).

Taos Downtown Historic District is a historic district in Taos, New Mexico. Taos "played a major role in the development of New Mexico, under Spanish, Mexican, and American governments." It a key historical feature of the Enchanted Circle Scenic Byway of northern New Mexico.