The Fannie and John Hertz Foundation is an American non-profit organization that awards fellowships to Ph.D. students in the applied physical, biological and engineering sciences. The fellowship provides $250,000 of support over five years. The goal is for Fellows to be financially independent and free from traditional restrictions of their academic departments in order to promote innovation in collaboration with leading professors in the field. Through a rigorous application and interview process, the Hertz Foundation seeks to identify young scientists and engineers with the potential to change the world for the better and supports their research endeavors from an early stage. Fellowship recipients pledge to make their skills available to the United States in times of national emergency.

The Hertz Foundation was established in 1957 [1] with the goal of supporting applied sciences education. The founder, John D. Hertz, was a European emigrant [3] whose family arrived in the United States with few resources, when the Hertz was five years old. Hertz matured into a prominent entrepreneur and business leader (founder of the Yellow Cab Company and owner of the Hertz corporation) as the automotive age burgeoned in Chicago. Initially, the Foundation granted undergraduate scholarships to qualified and financially limited mechanical and electrical engineering students. In 1963, the undergraduate scholarship program was phased out and replaced with postgraduate fellowships leading to the award of the Ph.D. The scope of the studies supported by the fellowships was also enlarged to include applied sciences and engineering. Recipients of the Hertz Fellowship typically attend competitive graduate schools such as Stanford, Harvard, Columbia, MIT, Caltech, Chicago, Princeton, and UC Berkeley.

For the 2017-2018 academic year, nearly 800 applicants applied for 10 spots, giving it an acceptance rate of 1.5%, or about a quarter of that of top undergraduate institutions.

To be eligible for a Hertz Fellowships, a student must be citizen or permanent resident of the United States of America. Eligible applicants must be students of the applied sciences, math or engineering, and desire to pursue a Ph.D. degree in the applied sciences, math or engineering. College seniors as well as graduate students already pursuing a Ph.D. may apply.

The application period opens in August, when electronic applications are made available by the Hertz Foundation. All Fellowship applicants are notified by mail of the Foundation's action on their application on or before April 1.

In 2018, some 30 Hertz Fellows were recognized by MIT Tech Review, Forbes, the Howard Hughes Medical Institute, National Academy of Sciences and many others for outstanding work in their respective fields.

The Hertz Foundation requires that each Fellow furnish the Foundation a copy of his or her doctoral dissertation upon receiving the Ph.D. The Foundation's Thesis Prize Committee examines the Ph.D. dissertations for their overall excellence and pertinence to high-impact applications of the physical sciences. Each Thesis Prize winner receives an honorarium of $5,000.

Condensed matter physics is the field of physics that deals with the macroscopic and microscopic physical properties of matter, especially the solid and liquid phases which arise from electromagnetic forces between atoms. More generally, the subject deals with "condensed" phases of matter: systems of many constituents with strong interactions between them. More exotic condensed phases include the superconducting phase exhibited by certain materials at low temperature, the ferromagnetic and antiferromagnetic phases of spins on crystal lattices of atoms, and the Bose–Einstein condensate found in ultracold atomic systems. Condensed matter physicists seek to understand the behavior of these phases by experiments to measure various material properties, and by applying the physical laws of quantum mechanics, electromagnetism, statistical mechanics, and other theories to develop mathematical models.

The electron is a subatomic particle whose electric charge is negative one elementary charge. Electrons belong to the first generation of the lepton particle family, and are generally thought to be elementary particles because they have no known components or substructure. The electron has a mass that is approximately 1/1836 that of the proton. Quantum mechanical properties of the electron include an intrinsic angular momentum (spin) of a half-integer value, expressed in units of the reduced Planck constant, ħ. Being fermions, no two electrons can occupy the same quantum state, in accordance with the Pauli exclusion principle. Like all elementary particles, electrons exhibit properties of both particles and waves: they can collide with other particles and can be diffracted like light. The wave properties of electrons are easier to observe with experiments than those of other particles like neutrons and protons because electrons have a lower mass and hence a longer de Broglie wavelength for a given energy.

Lene Vestergaard Hau is a Danish physicist and educator. She is the Mallinckrodt Professor of Physics and of Applied Physics at Harvard University.

Claire F. Gmachl is the Eugene Higgins Professor of Electrical Engineering at Princeton University. She is best known for her work in the development of quantum cascade lasers. 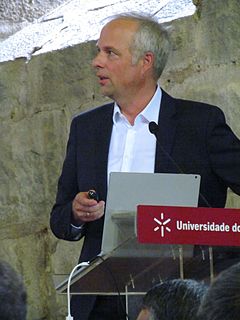 Jörg Wrachtrup is a German physicist. He is director of the 3rd Institute of Physics and the Centre for Applied Quantum Technology at Stuttgart University. He is an appointed Max Planck Fellow at the Max Planck Institute for Solid State Research in Stuttgart. Wrachtrup is a pioneer in solid state quantum physics. Already in his PhD thesis, he carried out the first electron spin resonance experiments on single electron spins. The work was done in close collaboration with M. Orrit at the CNRS Bordeaux. To achieve the required sensitivity and selectivity, optical excitation of single molecules was combined with spin resonance techniques. This optically detected magnetic resonance is based on spin dependent optical selection rules. An important part of the early work was coherent control. As a result the first coherent experiments on single electron spins and nuclear spins in solids were accomplished.

Andreas Mandelis is a professor and researcher at the department of Mechanical and Industrial Engineering at the University of Toronto and director of the Center for Advanced Diffusion-Wave and Photoacoustic Technologies (CADIPT). He is an internationally recognized expert in thermophotonics. His research encompasses the non-destructive evaluation of materials with industrial and biomedical applications. He is considered a pioneer in the fields of diffusion-wave, photothermal and photoacoustic sciences and related technologies. He is the inventor of a photothermal imaging radar which can detect tooth decay at an early stage.

Richard Magee Osgood Junior. is an American applied and pure physicist. He is currently Higgins Professor of Electrical Engineering and Applied Physics at Columbia University.

Belita Koiller is a Brazilian Professor of Physics at the Instituto de Física, Universidade Federal do Rio de Janeiro (UFRJ), Brazil. She is a Condensed Matter Theorist, and has contributed to the understanding of the properties of disordered solids, particularly disordered chains and semiconductor alloys. More recently, she has been interested in quantum control of individual electron spin and charge in semiconductors, aiming at applications in quantum information and quantum computing.

Robert J. Schoelkopf III is an American physicist, most noted for his work on quantum computing as one of the inventors of superconducting qubits. Schoelkopf's main research areas are quantum transport, single-electron devices, and charge dynamics in nanostructures. His research utilizes quantum-effect and single-electron devices, both for fundamental physical studies and for applications. Techniques often include high-speed, high-sensitivity measurements performed on nanostructures at low temperatures. Schoelkopf serves as director of the Yale Center for Microelectronic Materials and Structures and as associate director of the Yale Institute for Nanoscience and Quantum Engineering. Since 2014, Schoelkopf is also the Director of the Yale Quantum Institute.

Cindy A. Regal is an American experimental physicist most noted for her work in quantum optics; atomic, molecular, and optical physics (AMO); and cavity optomechanics. Regal is an associate professor in the Department of Physics at the University of Colorado and JILA Fellow; and a Fellow of the American Physical Society (APS).

Monika Schleier-Smith is an American experimental physicist studying many-body quantum physics by precisely assembling systems of ultracold atoms. These atomic, molecular, and optical physics (AMO) engineered systems have applications in quantum sensing, coherent control, and quantum computing. Schleier-Smith is an Associate Professor of Physics at Stanford University, a Sloan Research Fellow, and a National Science Foundation CAREER Award recipient. Schleier-Smith also serves on the board of directors for the Hertz Foundation.

Avraham (Avi) Gover is an Israeli professor of Electrical Engineering in the Physical Electronics Department of the Engineering Faculty at Tel Aviv University, specializing in Quantum Electronics and FEL Physics. Gover is also the head of the Israeli Center for Radiation Sources and Applications in Ariel. In 2005, he was awarded the international FEL prize "in recognition for his outstanding contributions to Free Electron Laser science and technology".

Hui Cao (曹蕙) is a Chinese American physicist who is the John C. Malone Professor of Applied Physics, a Professor of Physics and a Professor of Electrical Engineering at Yale University. Her research interests are mesoscopic physics, complex photonic materials and devices, with a focus on non-conventional lasers and their unique applications. She is an elected member of the US National Academy of Sciences and of the American Academy of Arts and Sciences.